THE UNBOUNDED LINE: A SELECTION FROM THE JUAN CARLOS MALDONADO ART COLLECTION

The opening to the public of a remarkable collection that in 14 years has amassed works representing geometric abstraction —that in a way extended from the south of America—, enriches Miami’s art scene in the best way possible: contributing to a pedagogy of creative aesthetics and its social implications. Carlota Pérez-Appelbaum’s proposal as curator for the exhibition The Unbounded Line, that opened the collection to the public, evokes two intentions: on the one hand, to contribute to a reflection on Modernity that undoubtedly seeks to fuel a history of global geometric abstraction that is still being completed, and to make a pedagogical contribution that allows for a more extensive outreach of the meaning of that search throughout the continent. The exhibition also proposes a dialogue with homologous pieces by European artists of different generations: Vasarely, Max Bill, Francoise Morellet, Dadamaino and Getulio Alviani, among others. 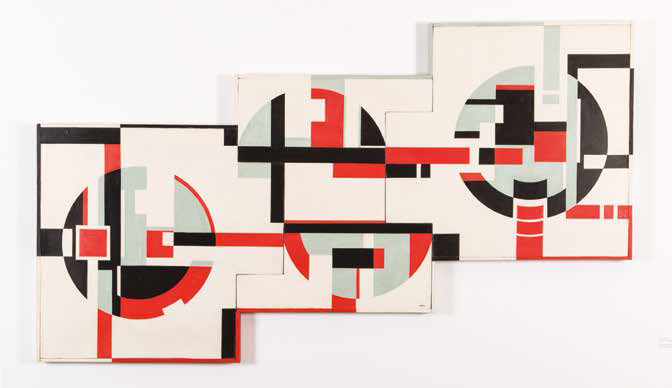 The visit to the collection and the reading of the catalog allow us to open up a panorama in which we can appreciate the decisive confluence of the pioneers in Paris, as well as the various movements, groups, manifestos and publications that were contributing to lead the way to a modernity in Latin America. The works were chosen precisely because they belong to crucial decades for the gestation of abstract languages that provoked a proper development of Latin American Geometric Art. This selection has the additional virtue of incorporating some notable works of abstraction in Mexico and of that powerful Cuban abstraction that was affected with the advent of another revolutionary aesthetic. There are crucial works by Loló Soldevilla and Sandú Darié, Luis Martínez Pedro, José Mijares, or pioneers like the also critic Mario Carreño or Wifredo Arcay.

Between 1945, the year of Bipolar Sculpture by Martín Blasko, and the date when he met Carmelo Arden Quin —with whom he would co-found the MADÍ Movement, along with GyulaKosice and Rhod Rothfuss— and the wonderful painting by Regina Aprijaskis, Negro, blanco, rojo y verde from 1996, we can appreciate works that allow us to track the contributions of artists and movements. For example, Constructive Structure No.8, created by Juan Melé in 1946, year in which he began to

produce his tributes to the paintings of Mondrián with appropriations in cut wood; one of the light structures with neon gas of Kosice himself, also co-founder with the former and other artists of Concrete Art-Invention; Form in Relief, 1948, from theconstructivist of the Escuela del Sur, Gonzalo Fonseca; Planos espaciales, sculpture built the same year by Ennio Iomi, conjugating wire and vacuum; Móvil, 1949, with geometric shapes of Arden Quin wood; a “Coplanar” by Antonio Llorens; one of the floating shapes on a colored field of the founder of “Perceptismo” Raúl Lozza; Composición, 1960, a work with rectangular supports of 1960 that reflects the searches based on formal sciences of Tomás Maldonado, co-inventor of the Inventive Manifesto and design theorist; Concreto Spaziale, an early 1957 three-dimensional piece with holes by Lucio Fontana; Lumière Galaxia, 1969, built by Julio Le Parc at the end of the decade in which he joined the GRAV (Groupe de Recherche d’Art Visuel,) or a painting by Rod Rothfuss of that same date and a canvas of the mid 70’s by Cesar Paternosto with his initial experimentations with colored planes on the lateral ends of the works. Also exhibited is a 1959 piece of the series of Interferencias concéntricas that Antonio Asis began in the late 50s; a work in which Mira Schendel transfers poesia concreta into art; one of the “Meta-schemas” of the late 50’s of Oiticica; a bug-mockup of 1960 by Lygia Clark; a Neoconcreto drawing of 1960 by Lygia Pape, co-founder of Grupo Frente; Relief 197, one of the emblematic pieces with white wooden cylinders by Sergio de Camargo from 1968; and a painting of the same year by Judith Lauand, “the first lady of Brazilian Concretism.” Mexico is represented in a magnificent way with one of the Mensajes dorados of 1967 by Mathias Goeritz, and Venezuela with a piece from the series Escritura by Jesús Soto from 1963; a Coloritmo of 1960 and one of the later planks of Alejandro Otero of the 70’s; and a “fisicromía” by Cruz-Diez from 1972. There are also works by individuals of those artists who formed a couple such as those nationalized in Venezuela, Gerd Leufert and Gego, or the Uruguayan José Pedro Costigliolo and María Freire, who co-founded the Grupo Arte No Figurativo (Non-Figurative Art Group). In short, the exhibition displays a panoramic vision of the multiple contributions of those artists who have written another history of Latin American art. An effort that must be applauded at a time that redefines the role of private collections and their role in this way of opening up to an aesthetic and social pedagogy.