The exhibitions by experienced artists Gerardo Goldwasser and Pablo Uribe held at Galería del Paseo evidence a shared sensibility and a similar placid atmosphere. By different means, the two shows by artists of the same generation look to ancestral traces and give rise to a multiplicity of meanings. 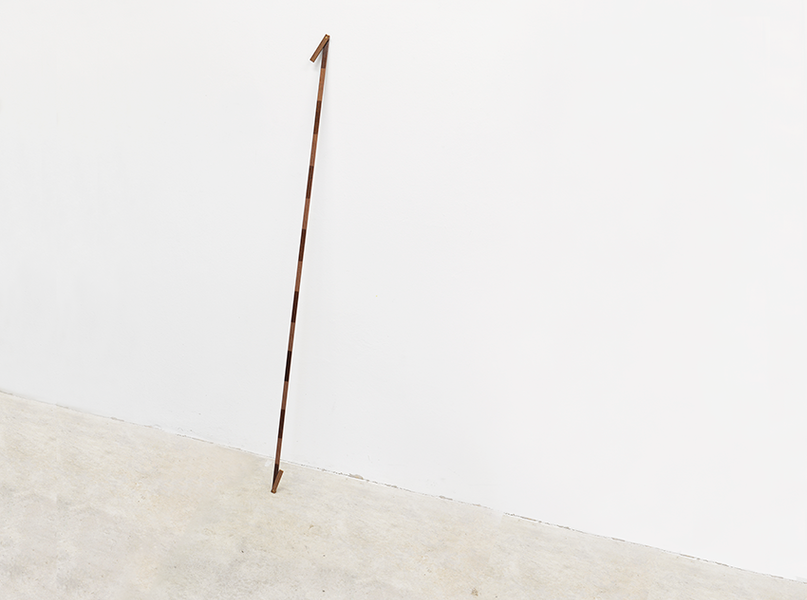 Early on, Gerardo Goldwasser (Montevideo, 1961) began making use of attributes associated with a tailor’s trade in his emotional and sparse works. His pieces are a silent recollection of his grandfather and what he went through at a Nazi concentration camp during World War II (he managed to survive thanks to his trade). The artist’s father and uncle were tailors as well, and the artist transformed the forms and materials typical of that trade into poetic works of art. The ink lines, marks on paper “mosaics,” and folded fabrics are reminiscent of basic patterns and the artisanal production of garments; like the digital prints, the incisions and lines on patterns and objects give shape to a map of a collective family story perhaps too dramatic to ever be “sutured.”

In Croma, Pablo Uribe (Montevideo, 1962) makes reference to the memory of Uruguayan painting. This project, like the artist’s earlier work Luna con dormilones [Moon with Sleepy Heads], appropriates the work of Uruguayan artists José Pedro Costigliolo, Torres-García, José Cúneo, Miguel Ángel Pareja, and Petrona Vierain, but now Uribe also disintegrates those artists’ paintings . He eliminates the figurative images and removes the colors, bringing to light abstract compositions, generating unforeseen scales and intimate geometries. With a degree of irony, the artist points out that replacing landscapes and characters with color palettes is ultimately a “’useless’ attempt to systematize, inventory, and catalogue color in Uruguayan painting.” His unique prints and delicate books suggest a system of thought, distinguish rhythms, and highlight tones.