This first solo exhibition of the Colombian artist explores the historical representations of what is considered unconventional sexual desire. 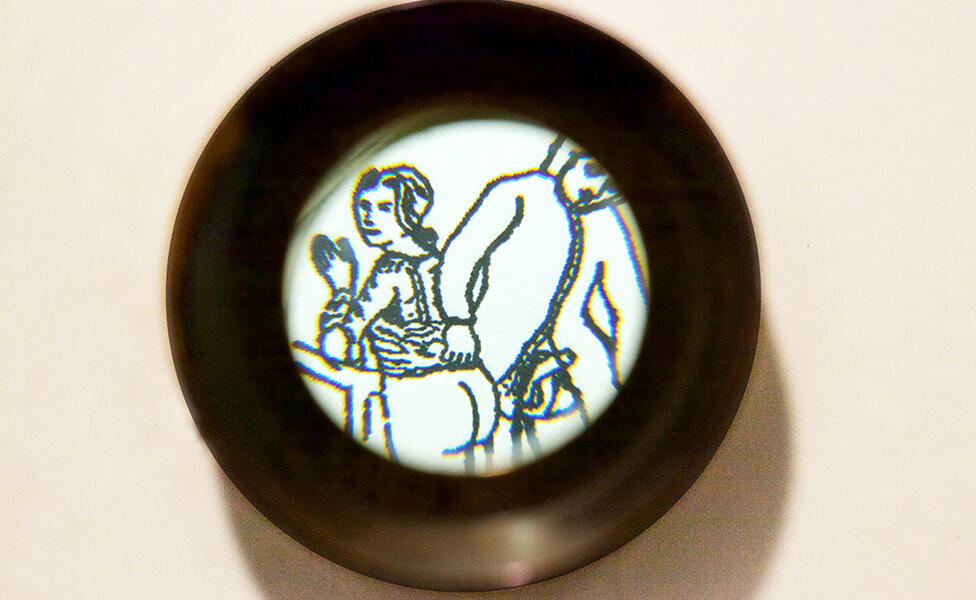 “There is nothing to see in here!” proclaims, with a dose of enthusiastic humor, gallerist Alex Mor upon walking into the exhibition of work by Carlos Motta (Bogotá, 1978). Indeed, the room does seem empty, except for the miniature circular objects embedded in the walls. To see them, the viewer has to come close, lean over slightly, and look through a magnifying glass. It is then that historical images of homosexual scenes—male and female, some of them beastly, others taken from the Bible—or images of characters from Roman mythology engaged in sex acts appear.

The installation of twenty miniature drawings eloquently entitled Puissance et jouissance [Power and Pleasure] shows viewers how certain desires were constructed as “unnatural” and, consequently, considered marginal or rendered invisible. The title makes reference to the cartoon made for the Rapport contre la normalité [Report against Normalcy] published by the Front Homosexuel d’Action Révolutionnaire (FHAR), a nonpartisan Parisian movement founded in 1971 credited with making the gay and lesbian movement of the time visible.

A multimedia artist, Carlos Motta is a true researcher. He studies and documents the social conditions and political struggles of sexual and gender minority communities in order to question dominant discourses and norms. He could be considered an archivist of repressed histories and forgotten narratives.

Further in the exhibition, the viewer hears voices coming from the basement: Deseos [Desires] is a video that narrates the parallel stories of two women—Martina from Bogotá and Nour born in Beirut—in the 19th century. The imaginary correspondence between two women who had lesbian relationships reveals the barriers they had to overcome—trial in a court of law and the reaction of their respective families—simply for expressing the love they felt for a person of the same sex.

This first solo exhibition of the Colombian artist explores the historical representations of what is considered unconventional sexual desire, which most deem indecent, as well as the institutional mechanisms that produced them. Although located in a fairly precise historical moment, the debate this exhibition formulates continues—unfortunately—to be cause for heated dispute.