As an extension of the “Alternative Views” project presented in Chile’s Pavilion in the Venice Biennale, the stand of the French gallery Mor Charpentier presents in ARCOmadrid 2020 a series of works by Voluspa Jarpa (Chile, 1971) never displayed before. 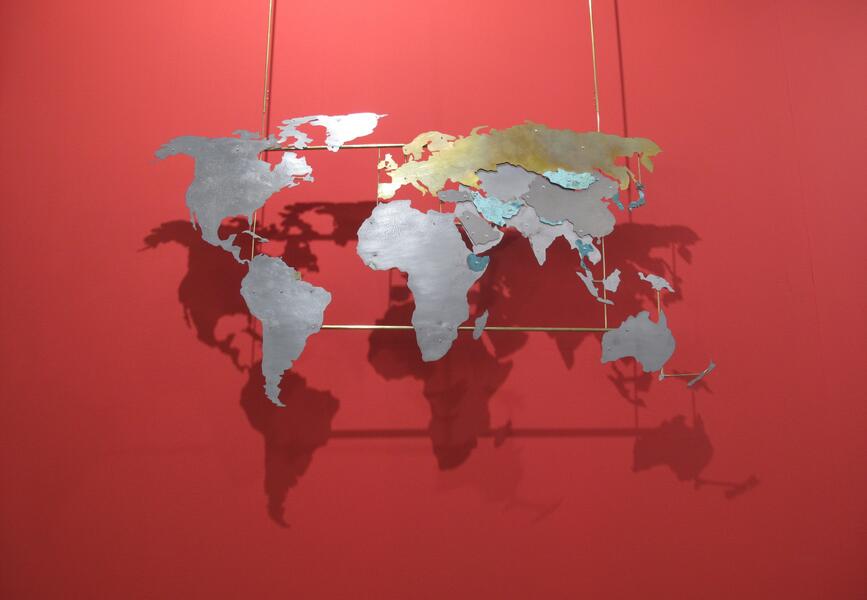 There are two reasons why it is worth visiting the Mor Charpentier gallery in this new ARCOmadrid edition. On the one hand, the amount of work exhibited belonging to Latin American artists is amazing. As explained by the gallery, this is because the

work lines with which they have affinity respond to a “political and social commitment, and it turns out that there are many Latin American artists who express themselves parting from these issues. " Some of the artists present are, for example, Teresa Margolles (Mexico,1963), with her photograph The capital sneaks in; Edgardo Aragón (Mexico, 1985), who exhibits cartography (Empire); and Daniel Otero Torres (Colombia, 1985) whose work Displacements contrasts the free movement of animals in the world with the hostile international border policies.

On the other hand, there is an individual sector of the stand that works as a small sample. There, between red and white walls, hang six works by the renowned Chilean artis Voluspa Jarpa. All of them correspond to a research paper that Jarpa is working with in extension of a first project presented in the Museum of Art Latin American of Buenos Aires (MALBA), in 2018, and then at the 58th Venice Biennale as a representative of the Chilean Pavilion, where she participated with his Alternative project Views.

In this series, as in most of his work, Jarpa proposes to decolonize a set of categories of differentiation and subordination - mainly of class, gender and race - inheritated in Latin America by European and, later, American colonialism, since the end of the fifteenth century. For the artist, decolonization must necessarily arise from a critique of the hegemonic notions of culture imposed. For this, Jarpa has developed the works that are exhibited here according to CIA classified documents of what was called Operation Gladio, a group specialized paramilitary who responded, during the Cold War, to the powers of NATO

- that is, the United States, Great Britain and France - to boycot, at any cost necessary, political movements contrary to the Western capitalist model. Likewise, the works also refer to issues related to feminist movements within the European political systems and the human zoos that took place during the period from 1845 to 1958. Perhaps, the most representative work of the Chilean artist's thought is the great planisphere made in watercolor that includes words - "Last chance" on the Vietnamese territory, "Banana countries" to name Central America or “Public, full sector” in India - and images that refer to colonization and geographical, cultural and linguistic neocolonization of Latin America.

Why approach this macro exposure in Mor Charpentier? Well, because it's about a work never exhibited before by one of the most relevant contemporary Latin American artists within the international scene. In case this is not enough, it is worth it because the working model of Voluspa Jarpa, excellently defined by Agustín Pérez Rubio - curator of the Chilean Pavilion at the 58th Venice Biennale - as a “choral” work, represents the interdisciplinary cross that contemporary art demands: a trend that, pleasantly, moved away from absolute aestheticism to legitimize Art as a producer of knowledge. A creative production that, for Jarpa, must address the "subject of today."