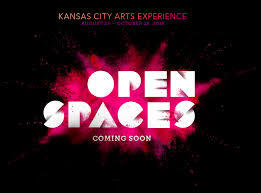 "The idea is to create an exclusive cultural event for Kansas City", saidCameron. In addition to attracting an international audience, he hopes the exhibition will encourage young and ambitious artists to stay in Kansas instead of going to larger art centers.

Cameron got involved in Open Spaces after a visit to the city a couple of years ago, when he contacted local philanthropist Scott Francis, who was looking to launch a large-scale international art exhibition there. Coincidentally, the city had also turned to Cameron about his own plans to create an event to promote local art and culture, a priority of the city's mayor, Sly James.

"The two parties really did not know much about what the other was doing, so I was the point of connection" Cameron said. "It's a way to take a private initiative to bring international art to Kansas and a public initiative to revitalize public spaces and raise the profile of the Kansas City arts scene in general, and combine them."

The event, which is also run by the Office of Culture and Creative Services of Kansas City, is funded by the city and by local philanthropists. The arts organization Kansas City Creates will coordinate project finances to keep expenses online and guarantee revenue.

"I firmly believe that Open Spaces can unite the people of Kansas City and the surrounding region in a way that can put our city on the map as a center of art and culture" Mayor James said in a statement.

Open Spaces comes together with another high profile artistic event in the Midwest, the FRONT Triennial, which will be launched this summer in Cleveland, Ohio. What will differentiate Open Spaces, according to Cameron, is his acceptance of the visual and performing arts. Few important biennial events, he says, consider that "visual and scenic art is an egalitarian practice."

Open Spaces will focus on Swope Park, which will house outdoor sculptures; the performances will take place at the nearby Starlight Theater, a 1951 open-air theater with a capacity for 8,000 spectators.

"Kansas City is one of the most beautiful cities in the United States in terms of design" Cameron said. "It's very rare that American cities of this size are so beautiful, for me that's very inspiring."