WHO'S THAT GIRL?: FLAVIA DA RIN IN THE MODERN ART MUSEUM OF BUENOS AIRES

Regarding the first retrospective exhibition in a museum of the young Argentine artist Flavia Da Rin (Buenos Aires, 1978), the perspective and the thought open to a unique creative universe, when touring the 250 artworks that are displayed in the Modern Art Museum of Buenos Aires.

Organized by series, what stands out with greater evidence, at first, is the repeated use of photography and digital tools to enable the manipulation of the artist's own image. The beginning of Da Rin's career parallels the technological fury with the presence of virtual reality, chats, selfies. A universe of tools that began to be used to refer to the construction and presentation of the image in various social spheres and from issues related to art, consumption, femininity, identity itself. 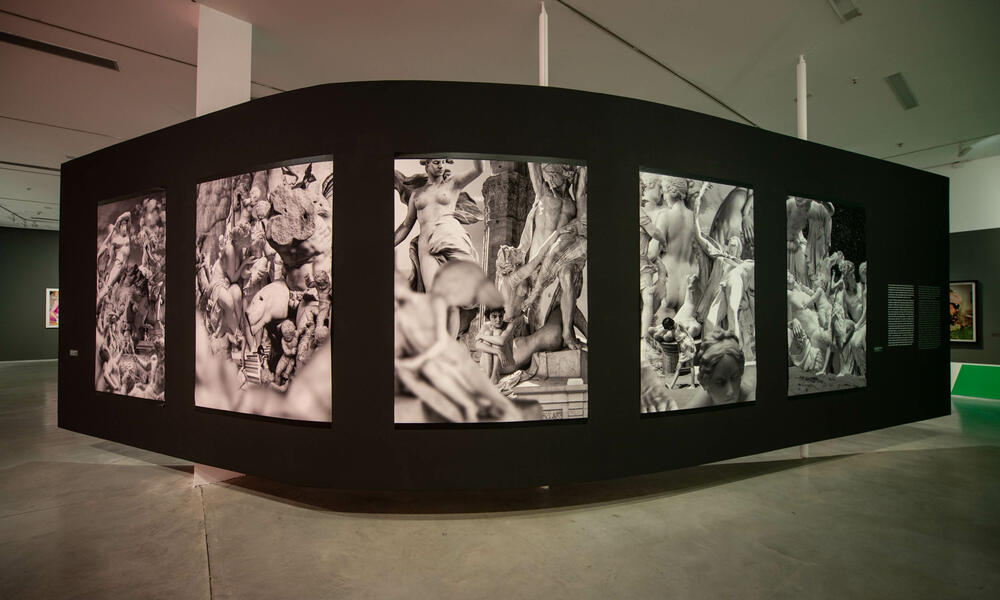 In a series produced between 2005 and 2007, the adolescent or young woman appears with very large eyes (motive and present in several works of that period), with advertising and anime image features and an emphatic and diverse expressiveness (amazement, sadness, enthusiasm, disappointment) related to that transmitted through the emojis.

Social and feminine stereotypes also break into the series Una fiesta para sacudirse el terror del mundo (A party to shake world’s terror off, 2011). In it, Da Rin resorts to the use of the mask, an exuberant chromatism and a theatrical gesture to refer to conventions of the current art world with pop art ingredients and the reference to paintings by the Belgian James Ensor. The concept of mask, of what is hidden and reveals, is present in various ways in her work, as is the look towards art history.

In the series El misterio del niño muerto (The mystery of the dead child, 2009), the artist embodies all the characters of a funeral to represent the symbolic death of an artwork when she leaves the workshop. There are representations in the format of polyptychs, rounds and altarpieces, in an atmosphere on horseback between Francisco de Goya, El Greco and the television series Twin Peaks by David Lynch, constituting one of those stylistic symbiosis that the artist manages with ease and own seal. The past of art and women artists appears in the photographs with which she pays tribute, once again from the versatility of her own figure, to those who were left out of the canon of art history.

In the series Terpsícore entreguerras (Interwar Terpsícore, 2014), Da Rin recreates documentary photographs of fundamental avant-garde dancers of the early twentieth century –who found the basis of contemporary art-, such as the Romanian Lizica Codreanu, the German Valezka Gert and Mary Wigman, the Italian Giannina Censi and the American Martha Graham. Meanwhile, in Burdens of life and Autorretrato (Self-portrait), both produced in 2016, she reflects on the relationship between motherhood and artistic career from her experience and with new aesthetic twists. In the first case, these are digital photomontages where her body and that of her children are interwoven and run through huge classical or neoclassical sculptures. “Da Rin is the director, the set designer and the editor of her own work. Although she resorts to fiction and modifies her image until it is often unrecognizable, her artwork is strongly autobiographical (…), ” says the curator of the exhibition, Laura Hakel. In this regard, the museum presents a room / workshop that recovers the spirit of the bedroom and the workshop of the beginning of her artistic career. Before entering it, we found one of her latest series, Espíritus (Spirits, 2018), with beautiful images of leafy and romantic scallops, as a mimicked hairstyle with elements of nature.

¿Quién es esa chica? (Who's that Girl?) is the title of this retrospective and, although it is an open question, we can risk a possible answer after going through it. That girl is Flavia Da Rin, who puts on stage what we are all in some way: unique people in permanent transit between experiences, images, identities and lives.