THE TIME WE HAVE LEFT: AN EXHIBITION BY HERNÁN SORIANO AT LANZALLAMAS
By Santiago López | November 15, 2019

With Fiorella Di Biase's curatorship, the exhibition The time we have left, by Hernán Soriano, takes place at the Lanzallamas gallery. Santiago López shares his thoughts. 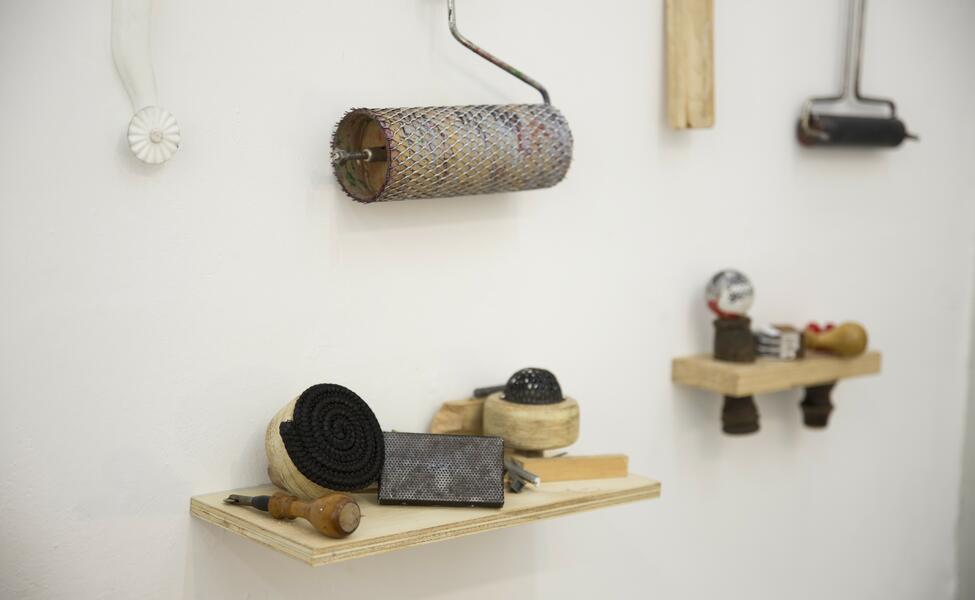 Fallible, perfect: notes on The time we have left

One could characterize the space in an art gallery as a hybrid; a space like no other that presents and makes visible the symbiotic and necessary relationship between art and market, and where, under an inattentive eye, the former may fall prey of the latter. The Lanzallamas gallery is no such place, as the in exhibitions that it hosts there is a clear search for stressing the relations between the works and the physical space they inhabit.

And so, we have El tiempo que nos queda (The time we have left), an exhibition that combines the work of Argentinean artist Hernán Soriano with the curatorship of Fiorella Di Biase, conforming a new type of hybrid that not only generates a new marriage between work and space, but also reconfigures one in the measure of the other and viceversa, constituting what can be described as a system of its own, one in constant execution. In a fusion of exhibition space and work space, the proposal is a path in which both coexist naturally, and that is both organic and carefully calculated. These attributes define the mise en scène of the exhibition, they replicate and reinforce the themes and motives addressed by the artist, because replicating the space of the workshop allows for a window into his creative process, a window that the viewer can take into consideration while appreciating the works.

In the work realized for this exhibition, Soriano completely takes advantage of this workshop-gallery, and he can be regularly found there. In his absence it’s possible to come in direct contact with, not only his work tools, but also with the objects which inform and inspire his production. Objects which are, in a sense, the artists discourse. Echoing the Warburgian idea of atlas, the shelves are stacked with tools, toys, books, papers, pieces of cloth and all the elements that constitute the artist’s personal universe are exhibited, in full particularity and amplitude. The materiality of these objects allows for a more complete understanding of the results; that is to say, the very works that are shown among them. Thanks to the presence of these elements that the path from his work’s conception to its finalization may be fully appreciated, and it’s on this path that Soriano’s work shines; layer over layer of sense, created thanks to Di Biase’s curatorship, allow for multiple readings of his creations.

In this sense, the works extend the conceptual lines that the daily objects suggest; this notion of the aforementioned natural character, at once organic and calculated, is evidenced through the use of patterns -drawn, painted, cut, copied- that he creates manually, which represent his relationship with those similar patterns that we find in nature, or the industrial objects that form Soriano’s meticulous and detailed conceptual universe.

All this might imply the (erroneous) idea of an intention to exert some form of control of what is produced. However, far from avoiding it, the error is a part of Soriano’s patterns; a line of another color, a stain, a shadow that is slightly out of place. It is in this fallible character that the best defense of its perfection may be found; the human gesture of the artist, separated from any industrial or purely natural gesture, constitutes its unique and unrepeatable value.

So, thinking about this process is perhaps the best way of coming closer to the notion of time, and specifically time in its finite character. The arduous and complex work that Soriano realizes requires a particularly demanding temporal compromise, which, when visualized -both in the workshop and in the performative activations in which the audience may accompany him in the generation of specific actions-, gives it a very human, almost touchable, notion of time; one contradictory with the city and daily routine. When within reach and humanized, the time we have left can only be now.

The time we have left, by Hernán Soriano, with curatorship by Fiorella Di Biase.

*Closure: Friday November 29th. With the artist's and curatorship's guide.

Until November 29th at Lanzallamas.

Thursday to Friday 3pm to 8pm.