THE FIRST SWORD WAS A GIFT

The two rooms are raised as if a mirror joined them. The first exhibits, in the center, a cement plate submerged in a tray with a finger of water. In a corner, a sanctuary made of pink genre with swords and embroidered roses embraces a bowl-shaped pottery. This is built with pieces of disparate pieces glued together as if it were a Japanese kintsugui with gold threads; From the edges emerge the figures of an angel and an ominous creature, as of the underworld. On the opposite wall, the one that would be the mirror, there is a photograph: a stone wall and a collapsed gray and black monolith - very similar to a Rothko, but also a representation of the work in the center of the room - constitute a space ritual where a human figure approaches the hands to the black nucleus of the monolith. In Camila Carella's text, the fifth verse begins: "If you supported your hands in search of the heat of your own reflection, they would pass to the other side." 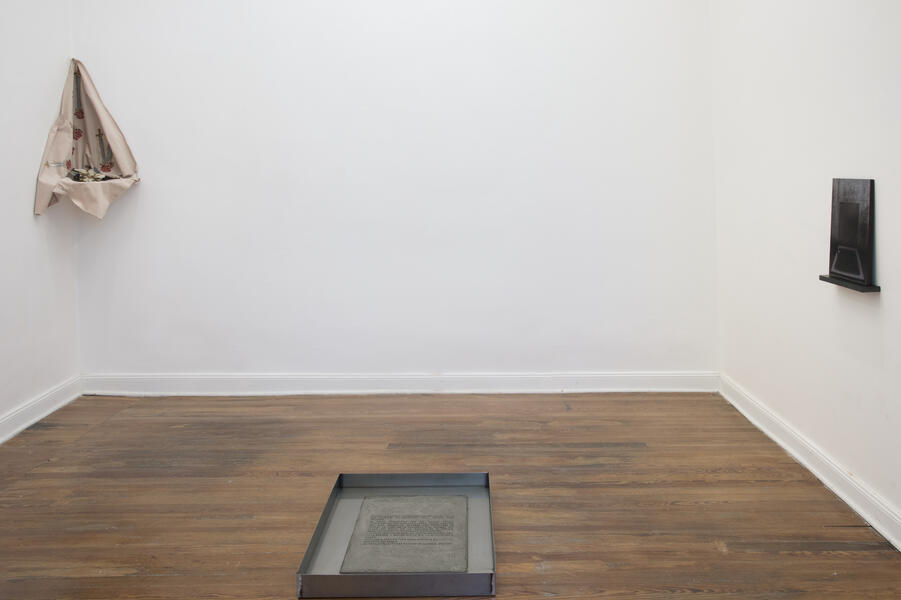 Thus, the left room of La primera espada fue un regalo (The first sword was a gift) - collective exhibition of Constanza Chiappini, Gonzalo Maggi and Julia Rosetti organized by the contemporary art platform INTEMPERIE in the Walter space, house for artists and with text by Camila Carella - introduces the viewer in a kind of mythological biblical account. Maggi's photograph forces to return to the board submerged in water, bend down and bring your face close until you can read the inscription lying on the wet cement. However, the effort is useless and fatigue leads one to the subsequent room: on the other side of the mirror, under the plaque, to the opposite hemisphere of the room that looks like an x-ray of the previous one.

All the elements - the plaque, the sanctuary and the kintsugui, the photograph - are repeated in the exact positions. But the content is different, and it is clear that one, as a spectator, was induced to complete the ritual. In the photograph there is now a woman drying her hands of a dark matter, the ceramic bowl contains a jar full of cane with rue - element to which we will return later - and the sanctuary is made with a blue plastic bag, as a vintage ; instead of the fountain and the wet plate, a sheet with the text of the inscription engraved rests on the ground, which begins: “The night was coming down and the gloom did not let me see what I was writing. It didn't matter the same, it was all inside ... ”.

In this way, the first sword was a gift full of symbolism and disparate elements. Intertextuality, for example, with The Orpheus Testament (1960) - the last film made by the French director Jean Cocteau -, where the protagonist, Cocteau himself, manages to inhabit two dimensions - the real one, on the one hand, and the fantastic one, on the other - and observing himself in his work and his creations (the characters of the two previous films that complete the trilogy: The sagre of a poet, 1932, and Orpheus, 1950) modify the ritual character of the show and by syncretism makes her dialogue with contemporary aesthetic and political issues - given even by the materials that constitute some of the works. The same generates the presence of the Kinstsugui. Of Japanese origin, the technique comes to mix with a whole western mythology - in what refers to Orpheus - and local folk - as for the Blessing of the Rue - which, in turn, is immersed in a contemporary framework - once engaged in dialogue with French cinema-, and proposes to repair them (make them others) to revalue them, in the same way that it does with the parts of other ceramics, from the sediments that each of these stories has left.

As a corollary of this hybridization of cultures and mythologies, on July 26 - opening day - Julia Rosetti and Valeria Anzuate carried out the performance La Bendición de la Ruda Trans. Making an appropriation of the original ritual, the artists recoded the process in the key of the present: instead of using nothing more than cane with male rue, as was done for hundreds of years, Rosetti and Anzuate added cane mixture with female rue. Thus, the first sword was a gift, a small but unattainable collective show in a visit and a text, plays with the syncretism and dynamism of the culture through the transvestism of millenary techniques and stories.