Sonia Falcone: Life Fields (show exhibited during 2017) is —for the length of the exhibit’s duration and sheer size of it—the most important exhibition to date by this celebrated Bolivian artist (b. 1965), who acquired international recognition with her multisensory installation Campo de Color/Color Field, recently purchased by the Nevada Museum of Art. True to its post-minimalism legacy, with hundreds of spices and mineral salts that speak of colors, smells, tastes and know-howss from the Andes to Siberia or the Himalayas´s earths and kitchens, this work displays a map of the entire world. Falcone participated with Color Field in the Montevideo Biennial, 2011; at the Venice Biennial 55; and in curated exhibitions in distant cities including the Royal Palace of Lisbon, where this installation flooded the luxurious Sala dos Arqueiros with aromas from all corners of the earth. 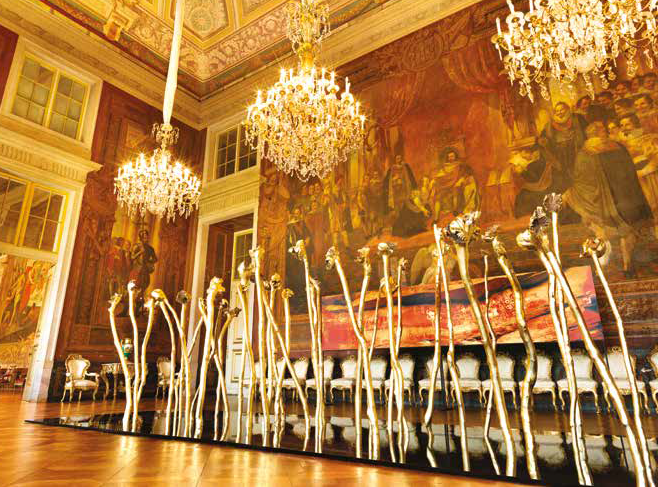 Undoubtedly, the historical context of this former royal residence increased the intrinsic power of Sonia Falcone’s work in order to create dialogues between cultures and merge different eras. Given its unique encounter with the Lusitanian history, Campos de Vida (Life Fields) renewed the underlying vision in pre-Columbian archaeological sites. By using various artistic strategies it also brought to the present the vast memory of Latin America´s relationship with the landscape, its popular practices, the echo of the ancestral languages and the richness of the crafts of Bolivia and the continent as a whole.

Curated by the Aluna Curatorial Collective (Adriana Herrera and Willy Castellanos) and conceived as a counter-conquest movement, this colossal intervention was intended as an aesthetic appropriation that temporarily altered the narrative of the Palace’s architecture and objects in the halls that until 1910 had housed Portugal´s monarchy. The transformation in the experience of those returning to the Palace is evident from the very entrance, where Passions of Life, a relational art piece formed by thousands of balloons, inflated by children from Cabo de San Lucas, Mexico, that rises up almost touching the crown in the triumphant coats of arms of the ceiling in the first courtyard.

In the windows where visitors usually observe Lisbon’s horizon and nature, Falcone inserted illuminated photographs of mythical Bolivian landscapes such as Lake Titicaca, where according to pre-Inca cultures humanity was first born, or the Amazonian Water Lilies that astounded Europe. According to the curators, Falcone challenges the “stereotypes of an exotic Latin American nature” while empowering it. The strategy used during the setup manages to blend its splendor and cultural meanings with Portuguese nature and history.” Royal Love, with exotic gold-plated jungle inflorescences and turned into luxurious sculptures, incorporated South American natureto the Palace halls.

By transporting and inserting into the Palace images of Bolivian spaces, practices and objects, all of these captured by her during a long investigative journey into the deep country —collecting materials such as the immemorial sound of the Aymara language (Voces doradas, 2014)— Falcone creates a new “topus,” a superimposed place where different times and cultures coexist. In the music room she installed, alongside palatial instruments, instruments of indigenous origin such as the quena, intervened with oils, and a reduced version of Drops of blood, installed in the Queen’s Portrait Room, originally had 60 containers full of perfume —a poetic metaphor of every drop of blood, of every existence— for it was the age of a friend of Falcone at the time of his death. For this version, she ininflados stalled 64 “drops of blood” evoking the years the Queen lived. In another room the initials of the kings were formed on the ground with alpaca wool pompons.

The Minister of Culture of Portugal, Luis Filipe de Castro Mendes, highlighted both the unique dialogue achieved between the art pieces and the history of each room, as well as the installation as a whole. The intervention included huge illuminated stained glass windows that were laid down on the ground with natural motifs such as the sea, absent from landlocked Bolivia, and thus turned into an invocation for historical retribution of this loss; images of architectures and archaeological paintings of American prehistory fused with the Palace works of art; and a large group of intervened handicrafts, such as the Mexican “alebrijes” inserted in the rooms. Altogether, the work of Sonia Falcone overthrows the frontier between art and craftsmanship, between kitchen and museum, and transcends the divide between nature and culture, building bridges between the ancestral and the contemporary, between the local and the universal and sustaining above all, a form of universality that “is not naïve,” as curator Castellanos maintains, since “she proposes, in very different ways, non-hegemonic dialogues between cultures and creates pathways in order to come closer to nature as our common home ...”