RETURN TO KOYAANISQUAATSI: WILLY CASTELLANOS AT THE KENDALL ARTE CENTER IN MIAMI

In the framework of the Lágrimas negras collective exhibition, curated by Isabel Pérez, the artist, curator and critic Willy Castellanos develops a proposal constituted as an individual show gathering four photographic poliptychs of different characteristics, three assisted or intervened ready-mades, a direct ready-made and an installation-box with multiple components. 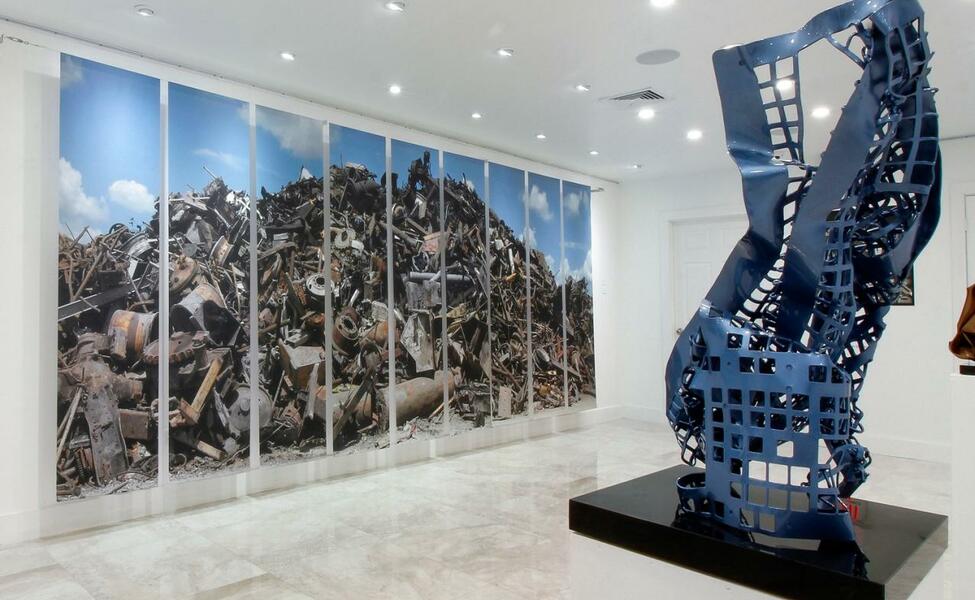 The greatest difficulty of photography these days, as a direct artistic practice, lies perhaps in that the potential easiness to make a photographic take increases the demands towards the construction of sense in a world saturated with images. The effort aimed thereto, of thinking as well as of visual and technical experimentation, usually antecedes and pursues the photographic act in such a way that it becomes merely a moment in the lengthy process of creation. Perhaps today, like never before, the problem lies not in what and how to photograph—which was the photographers’ main focus of concentration until a few decades ago—but, beyond that, what to do with the photographic images, that is, what discourse to construct and how.

This problematic assails me while watching Return to Koyaanisquaatsi, by Willy Castellanos, for several reasons found on the very basis of the exhibition’s artistic and communicative efficacy. One: photography becomes the central medium of exploration for the proposal’s discourse, where an inquiry is forwarded on the accumulation of waste as an outstanding trait of contemporary society. That is to say, unlike those artists aligned with the historical vanguards for whom waste was a component of their collages, assemblies and sculptures, in this proposal by Castellanos garbage is the protagonist per se.

Another one: The artist has used differentiated strategies to combine photographs in discursive or poliptych modules, one distinct from the other, with variations in their representational proposals and rhetoric emphasis, but efficaciously related to each other. Lastly: he has also displayed a set of residues taken from the same dumps he photographs as expositive elements contributing to expand the forwarded questionings. Castellanos’s proposal unfolds like a combination of representation and presentation—say between photography and ready-made. If photography is the medium of image production more directly connected with ready-made, for its technical condition of direct registry of beings and things, in any case, the presence of the ready-mades in the exhibition attempts to overcome the gap between waste and its representation.

It could be unnecessary to add, after the preceding explanation, that this project evidences not only a meditated approach to the complexities of its own subject, but the use of numerous resources of imagination. Besides, Castellanos, perfectly capable to turn words into a device to unleash combined reflections and emotions, accounts for the motivations and disquisitions that stirred him in his project in a personal text that welcomes the show’s visitor on the wall.

Castellanos’s photography gets the most out of a particular trait of the resources inherent to photographic construction: its possibility to embellish any referent. If garbage dumps are and cannot be anything but informal heaps—in the case of this photography, metal dumps, including auto parts, home appliances and others—the photographer chose to act on them by applying certain mutually related artistic operations: the search for the form within the formless, its localization and isolation. Each image in the Pac-Man Sushi’s and Cumulus poliptychs, both made between 2018 and 2019, evidences this operation and, at the same time, the manifestation of a specific mode of existence of form. That exploration on form should be understood, besides, as a simultaneous investigation on colors and textures of waste, which altogether bestows on the photographs an amazing visual sumptuousness. Part of this endeavor is also The Large Cumulus, 2019, a photograph printed on an enormous canvas divided into nine vertical strips, representing the semi-pyramidal form of a dump. In general, a concern for the beauty of waste, expanded to ready-mades, crosses the whole set of exhibited works and becomes a communicative thread between them.

In the aforementioned hall text, Castellanos places the reading of his proposal in the space occupied by the contemporary warning calls on the need to preserve the environment and construct a sustainable culture for mankind. Nonetheless, in the kernel of his visual proposal it is possible to find other fruitful ideas on a discussion concerning the constitution and performance of contemporary culture, to which he is by no means alien. In short, and it is a point also made by Return to Koyaanisquaatsi, our culture is nurtured by waste and rejoices in seeking beauty in the residual and disposable.