RE-COLLECTOR: AN EXHIBITION BY ANDRÉS MICHELENA IN VENEZUELA
| November 26, 2019 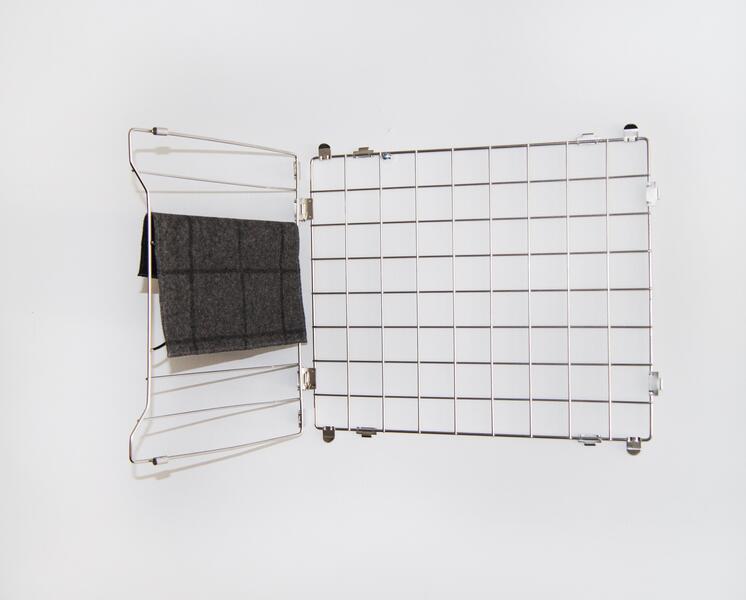 Andres Michelena’S WORK has been elaborated from an intense questioning regarding both the ways of “being” and “operating” the artistic object, and in reference to human existence and its tensions. In relation to the artistic object it explores its “being language”, its articulate potency and its capacity to establish plexuses of significant relationships that transform perception, comprehension and elaboration of reality. Regarding human existence and its tensions, he probes its surroundings, its uncertainty and contradictions, and also realizes interrogations of an ontological nature, with respect to the originary character of the void, or absence. A work of multiple artists and interpretations, a “relational” work that operates as an instrument to constitute networks of senses and allusions, and that thanks to that manages to tensely combine elements and “proposals” apparently opposed and contradictory.

A fundamental question supports his work, his process or laboring, and it is that of apprehending the void -or absence, the lack of something- as a kind of productive instance from which “something happens”, a sort of Khóra[1]: a space/nurse that is in itself an “articulation”, namely, an “between” that is the “taking place” of something, not being the something nor the place since both are already products, figurations, representations, consolidations, but the initial and founding event from which the figures are ordered and registered. Thanks to this fundamental question, his pieces have the texture of language when proposed as an “original space” (a formal and geometric structure) that is also an enunciation and the inscription of something in existence. Pieces that are, simultaneously, visual presence: instantaneity and totality, and enunciation: sequentiality, reading and concretion of a relationship plexus that occurs from allusions or signs. If the visual presence is given as an absolute, the reading is a riddle, a process of reconfiguration, always has something inaccessible- or inapprehensible.

Thanks to this statement that is made from a set of clues -some explicit, others implicit- such as allusion and incitement, it leaves room for uncertainty and adventure, so that something that cannot be fully apprehended is present, that cannot be converted into a specific meaning, it is related as an aspect of the Sublime, that paradoxical experience thanks to which something is given to sensitivity without being present, without manifesting itself properly as a determined image or meaning, but as excess and surplus, as something unattainable and unimaginable. This sublime condition implies tension and the encounter of immeasurable elements among themselves, implies that there is no possible description, nor adequate understanding, but an eloquent mute whose saying is not pronounceable, whose saying is elusive.

This texture of language, this allusion to the sublime, causes its pieces to be reconciled -always with an index of suspicion and uncertainty- two artistic dispositions directed to different places. On the one hand, these are works made with a subtle and sensually geometric composition that, in its formal austerity and structural coherence, emphasizes the qualities of materials and the expressiveness of shapes and figures. On the other hand, incorporated into these abstract and geometric pieces in the manner of a set of material and textual clues or cues, appears an appeal -a call, an allusion- to everyday experience, to contexts, to the works and speeches of the world, to the facts. So that, in these pieces, the clean formal structure is plotted with allusive data or texts that, by reshaping the “collage” strategies, manages to re-inscribe those abstract pieces in the concretion of particular situations and problems, manages to expand them semantically beyond its mere expressive condition.

In the Re-collector exhibition, presented at the Carmen Araujo Arte gallery (Caracas, Venezuela), Andrés Michelena presents a set of pieces in which this double dimension of the artistic saying (and the disturbing tension that it causes) is evident, its texture of language and allusion to the sublime are manifested. As the name announces, this plastic project is a re-collection exercise, in which pieces are recovered and collected, collected and harvested, treasured and collected fragments of everyday life, waste, remains and leftovers that are, in turn, transmuted and transfigured into complex “speech acts”, tense and “silent” statements that thematize concerns, questions and desires about the ontological texture of existing and the possibility if expression.

In all these works the allusions are multiple and are directed to various fields of culture, citing pieces the history of abstract and geometric art, of modernity and its imperatives, pointing to the textures that constitute the environment of everyday life, they suggest the chromatic diversity that surrounds urban existence and also refers to the knowledge of the artistic scene, its routines and ways of operating. In all of them, the geometric-abstract nature of the compositions has an equivocal index, there is a sensuality incorporated in the materials -their textures, brightness and qualities-, in the edges and encounters between the fabrics, the shapes or the structures, in the color overlay or the incorporation of fragments that displace orthogonal systems and schemes, in the play of works that seem to bend over themselves, showing their forehead and reverse, hiding and appearing simultaneously.

The various series and works bodies that Michelena presents in this exhibition are the product of the “cultivation” of his own experiences in all the contradictions and simulations that he allows himself, and they are also the effect of a “re-collection” process in which different signals that allude to their daily routines (for example, the fabrics that a furniture store discards, or the trays in which the Nespresso is served, or sales catalogues) become spaces of conjunction that can start a controversy between modernity and its rational principles, and the present day, with its political and contextual dispositions. All of them are tensioned, then, between the beauty and purity of the abstract composition and the sensual and imperfect density of what, being an experience, always overflows any possibility of registration and understanding.