Pedro Tyler: The measure of the uncountable 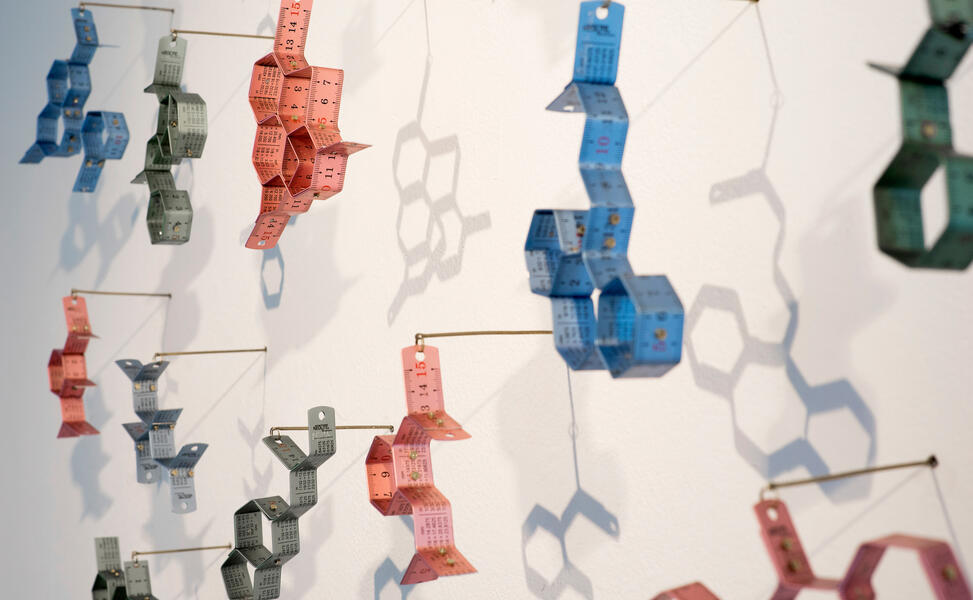 The use of rules as working material is the common denominator in Tyler's work. These tools make clear our rational approach to the material world-continuously measured, and negatively account for the absence of universal measurement systems to address the emotional world.

The artist works with these elements generating configurations that point to the unquantified (or quantifiable) world of ideas, thought, emotions and affections in pieces characterized by their formal elegance and subtlety.

The concept of measurement finds a correlate in the idea of ​​structure, order and disorder, which arises from the different spatial configurations in which Tyler arranges the rules and / or the manipulations to which he submits them. At the same time, the use of different types of rules, their chromatic variants, materials, size and notations, provides a range of aesthetic and semantic possibilities within a universe bounded by that choice.

In "Order II" (2018), an assembly of black rules, out of phase on two of its sides, we read the phrase "discover the truth in chaos" by Hunter Thompson. The movement of the elements is contrasted with the gravity of the black surface, while the phrase makes the numbers recorded on its support the signal of a positivist pointless insistence.

In "Viento blanco" (2018), a title that refers to a mountain storm, several folding rules of white (some in centimeters and others in inches), arranged diagonally, form an irregular elongated figure that vaguely resembles a cloud. On them is written a verse by Alfonsina Storni, "only the sky is perfect". Tyler articulates the idea of ​​perfection that would embody the sky with its storms-and the shadow of death that project-and the question by its measure (if you have it, if you can have it).

The tacit question about the nexus between material and immaterial world that runs through the work clearly appears in "Body and soul" (2015). In this installation, a series of colored anodized aluminum rulers have been folded and joined following the shape of the chemical structure of various drugs and drugs. The artist codes for colors the use of these substances: pink / pain of the body, blue / pain of the mind, green / pain of the soul. Tyler thus draws a bridge between body, mind and soul, revealing the similarity of these structures and the underlying scientific knowledge we have about these substances, the sense of pain remains radically private and their immeasurable experience for each person.

Pedro Tyler offers us a playful approach to the idea of ​​regulation and quantification, raising the question about everything that we do not submit to its numerical logic (love, fear, pain, imagination) but that, nevertheless, gives the measure of our humanity.