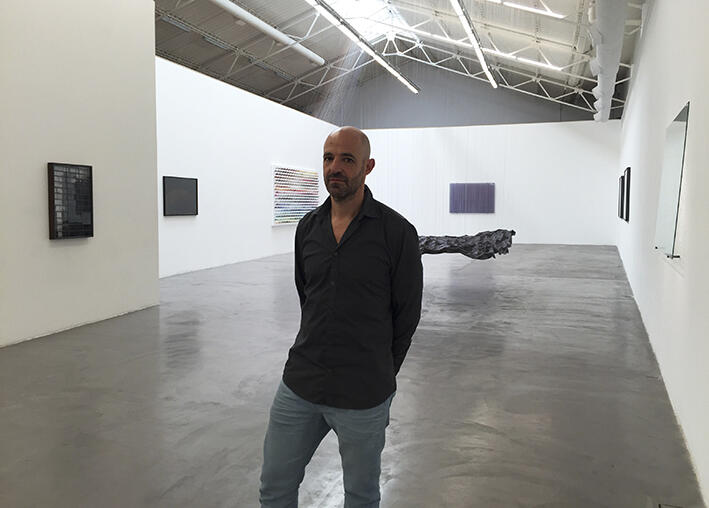 Cuarenta días y cuarenta noches featuring works by Miguel Rothschild (an artist born in Buenos Aires in 1963 who has lived in Berlin for the past twenty-five years) is on exhibit at Ruth Benzacar gallery in Buenos Aires. The title, which means “forty days and forty nights,” makes references to the period of time that, according to the Bible, rain fell on the face of the earth. The show’s centerpiece is the installation El Diluvio [The Deluge], a large photograph of a turbulent gray sea hanging 1.20 cm. above the floor thanks to scores of pieces of fishing line suspended from the ceiling like falling water. Punishment, but also the promise of a future alliance symbolized by the rainbow in the story from Genesis and represented here in the work Arco iris o la ascensión del arte concreto [Rainbow or the Ascent of Concrete Art]. For that work, colorful threads coming out of 370 reels rise up to the gallery’s ceiling. Monochrome bleu de Rothschild, meanwhile, is a reference to Yves Klein. The work playfully engages changes in the weather and in color as, like souvenirs, its hue changes from pink to light blue and purple depending on the climate. These works, and others with images of the sea, constitute one sector of the show. Another contains the “Atrapasueños” [Dreamcatchers] series, with images of Villa 20, a shantytown in the city of Buenos Aires. A shattered pane of glass is placed over each photograph; its lines follow or lie on top of cables that run from one house to the next. “The first section of the show places us in a city where misfortune is about to strike,” explains María Cecilia Barbetta in the curatorial text. The myth of the Parcae turns up in this part of the show as well. In the photograph Parcas sobre Buenos Aires [Parcae Over Buenos Aires], for instance, the Parcae’s treads determine the fate of the city and of its inhabitants. The line in its multiple forms—threads, scratches, wires—runs through the show in an artistic experience that wavers between the real and the mythological, the sacred and the profane, tragedy and humor, wealth and poverty, safety and violence, art and religion. Rothschild’s work often engages opposites either left unresolved or—perhaps—that the viewer must resolve him- or herself.  “What I like most is being in the middle, giving things simple and ordinary a divine connotation and lifting weight from the sacred, turning it into the profane,”  the artist explains. The first thing we see when we walk in the gallery is a large diamond with many scratches.  Resting on the floor, the piece is a prelude and possible synthesis of a show that, in the apparent simplicity of its images, epitomizes complex, and very human, concerns.