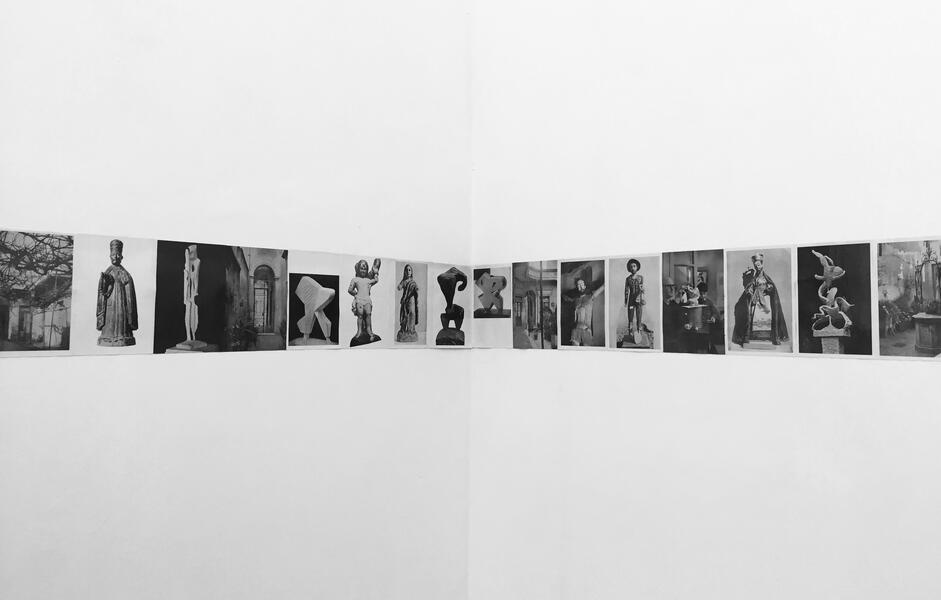 La semejanza y la pausa is the title chosen for the exhibition jointly carried out by Francisco Medail, artist and artistic director of BAphoto and Juan Cruz Pedroni, researcher and collaborator of this website, at Alimentación General gallery. The notion of similarity seems to have a clear reference in the context of the exhibition: it refers to the use of photography as a reproduction, a faithful record of monuments and works. The connotations of the second term are, on the other hand, less evident, although they seem to point to the instants (or is it, perhaps, of places?) In which the alluded resemblance stops.

This similarity of at leisure pauses unfolds in a line without intervals. It is not a chronological line but it keeps somewhere an idea of temporality. We could say that it is the crazed relative of an orthodox, conventional arrow of time. The row is made up of photographs taken from the only three books published by the Buenos Aires publishing house, a house established and dissolved in the same year of 1967. The images are mixed: the procedure intensifies the heterogeneity in the universe of the forms that are configured in that way. A bass line connects them, however: it is the use (or should we talk about ideology?) Of photography as reproduction.

There are three families of images that appear included, connected to each other as members of a large failed family: the Grete Sterne series of patios; a crowd of images, religious and profane, from the colonial era and finally (in the middle or at the beginning), sculptures by the Argentine avant-garde Pablo Curatella Manes taken by Humberto Rivas.

The Buenos Aires patios of Stern redirect a comparative look to the General Food patio itself. This resemblance, precisely, to the place where the show takes place hides perhaps an operation that tries to weave the weak knot between the project and the site-specific genre. Perhaps it is also a matter of discussing with other forms in which the patios of Stern have been shown: floating, like autonomous works, between the margins of a paspartu. For the rest, we find the images delocalised, immersed in improbable conversations. The sample looks like the remains of an imaginary museum. An extinct or discontinued museum, the disaster of an interrupted collection.

But that imaginary museum invents novel or at least telluric anachronisms. Unlike the parallels between black art and the historical vanguards, successively promoted, canonized and denounced, in this discontinuous series the cubism of Curatella Manes appears in the premodern mirror par excellence: the Christian imagery of the colonial era.

The found object offered by the Buenos Aires publishing house seems to indicate only the excuse to suggest relations of similarity that are not completed. Stripped from the books - in the same way that the room text is ready to be torn from the wall - the reproductions are aligned in their minimalist line towards a horizon that never appears. It takes the statement of a thesis to the fence of the teeth, without ever uttering it.