In Macaparana’s work, colors vibrate in linear structures held in careful balance by parallel, concentric, and slanting lines that follow an abstract and geometric calligraphy that dances over the surface. 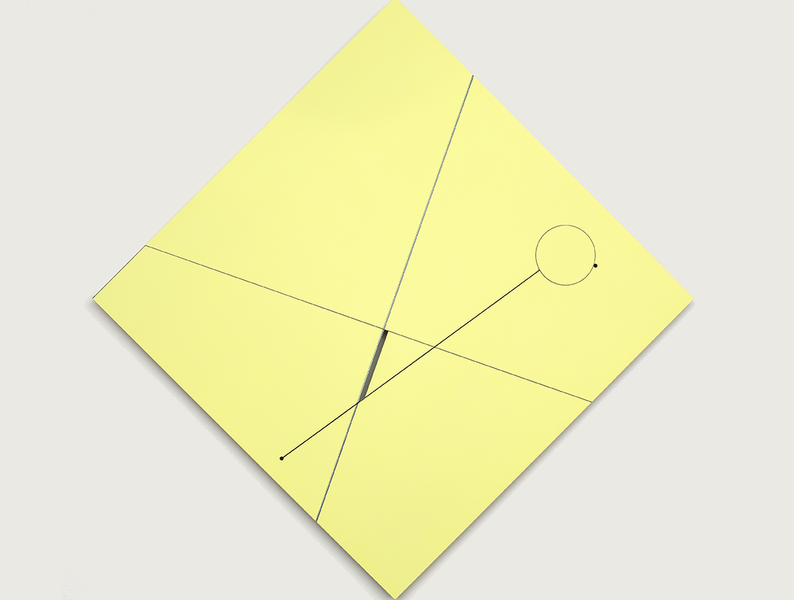 The Denise René -Rive Gauche gallery appears to be ideally suited to Macaparana’s work. Form and color come together in the austere compositions conceived specifically for the show. Each work is a different size and shape—circular, square, or parallelepiped—giving rise to multiple readings and creating graphic tension while constructing a visual alphabet. Circles both full and empty, straight incisions, forms black, white, red, blue, and yellow are laid out in the space with a rigorous arithmetic sensibility—nothing is by chance—to forge a new musical language in a concert of creation.

The passion with which Macaparana works makes itself felt in the range of sensations he shares with the viewer, facilitating the perception of atmospheres insinuated in each of the universes recreated and rendering an integral whole of color and form. Abstraction is the thread that runs through the show’s discourse, a concept to which only minimal references are made to then be adapted to the work as artistic fact. The past is referenced as well, though it is decontextualized and readapted to new spaces.

The work’s visual sophistication would seem to belie the fact that Macaparena is a self-taught artist. Born José de Souza Oliveira Filho in Pernambuco, where his father’s tailor shop was his favorite place to play, the artist took the name Macaparena when he moved to São Paulo in the seventies. As a child, he built a world and shaped a vision out of rulers, patterns, colored chalk, needle and thread.

It should come as no surprise that his painting is akin to that of other artists. Macaparana’s primary source as he made his way between concrete and constructivist art was Torres García, a decisive influence and the artist who most motivated him as he shifted from figuration to geometric abstraction. Indeed, the resounding importance of that contact with Torres García demonstrates the lasting influence of that master artist and of his tradition, which Macaparana reinterprets and transforms. Later, in São Paulo, contact with Willys de Castro and with Hércules Barsotti would also prove decisive to his passage to abstraction.

In the works in this show, like in his earlier works, the color is somber; it is used to shape flat squares, rectangles, and circles in a vision that could be called abstract realism. The pigments are carefully kept in their own sectors; they never go beyond their delimited areas, producing a sense of emotion held back. Macaparana never takes advantage of painting’s resources. He makes modest discoveries and pursues them tenaciously with no need for grandiloquent gestures. His power of invention is based on the rational use of drawing and on the rhythm imposed by the circle, here a source that generates space and a realm of harmony, of inner tensions perfectly balanced. Straight lines of varying thickness and simple circles come together to different degrees, where poetics both playful and cerebral intersect.

Macaparana’s work attests to his interest in music. Indeed, his entire production is an attempt to establish deep ties to it. His work also has a refined and intimate connection to a geometry bound to mathematics, to balance, and to form-color harmony. This musical relationship is meaningful to the artist insofar as it holds a real tie. Thus, in Macaparana’s work, colors vibrate in linear structures held in careful balance by parallel, concentric, and slanting lines that follow an abstract and geometric calligraphy that dances over the surface.

It is impossible to think of Brazil—the natural source of such musical wealth and creativity—without thinking of a sound. And the artist is not immune to that; indeed, it is a source of inspiration in his work. In that context, Macaparana confirms his interest in music and formulates an insightful reading and exploration. As vigorous and efficacious as they are coherent, these works question the senses. Macaparana, like other artists, is heir to a utopia bound to progress and modernity. With those artists, he has constructed an art that partakes of the abstract, geometric, and constructivist tradition. In sum, this work attempts to shake up—albeit subtly— the semantic field we usually associated with Macaparana in order to open up new possibilities and to hint at new musical meanings.