Luis Romero is interested in putting together a sort of inventory of the constructive resources of geometric abstraction in order to discover new discursive possibilities. 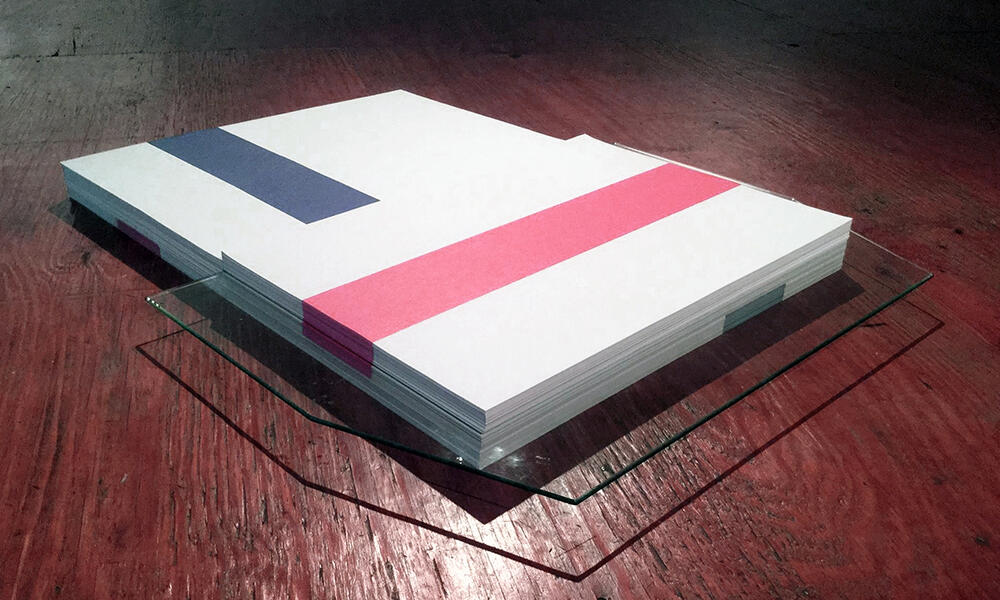 Luis Romero (Caracas, 1967) is a member of the generation of Venezuelan artists who began their careers in the nineties, an exciting period on the local art scene. In addition to making art, Romero has worked, from early on, as an art editor and curator. In the 2000s, he founded Oficina #1, an exhibition space for contemporary art he has directed ever since. His current work, on exhibit from September 10 to November 15 in Borderline, his first solo exhibition in Miami, forms part of his recent research in the field of abstraction. He proposes an alternative means of reflection and discursive construction of both nostalgic visions of Venezuelan modernism and the criticism of those visions’ short and polemic scope.

The extensive body of work in the show is made up of D.R.O., a collection of seven rubber sheets with circular holes of different sizes; Independent/Dependent, a series of monotypes composed by the relationship between either trapeziums or trapezoids. The work No todo lo que brilla es oro [All that Glitters Is Not Gold], a volume made up of three rectangular pieces, each with four laminated steel triangles in relief and two of them coated in gold leaf; Lego-Ego, a sort of cardboard spiral printed in lithographic ink; Ejes [Axes], a grid structure with twelve empty squares made of painted aluminum shafts; Parcial [Partial], a collection of seven paper collages in which geometric shapes in relief relate to a stain painted on the surface-base from which they rise; Tú&Yo [You and I], two piles of printed pages, some with a red line and others with a blue one, of different heights and structure; 1967-2014, a rubber cutout where the first date is superimposed on the second; and a long series of woodcuts entitled Suite Sustancial, in which different shapes decompose and re-combine against a color paper background.

An overview of this varied exhibition might make us think that Luis Romero is primarily interested in putting together a sort of inventory of the constructive resources of geometric abstraction in order to discover new discursive possibilities. Some of the works, though, reveal an interest in the personal and the autobiographical. From this perspective, Romero’s work constitutes a place where a personal narrative and the social and cultural history of Venezuela―a country in which geometric abstraction played an important role in the discourse of modernization—become connected and, on occasion, even converge in the search for meaning.