The removal of a section of the obelisk, as well as the fiction of transporting it and the choice of the new setting, not only formulates the artist’s political and conceptual agenda but also activates the senses. 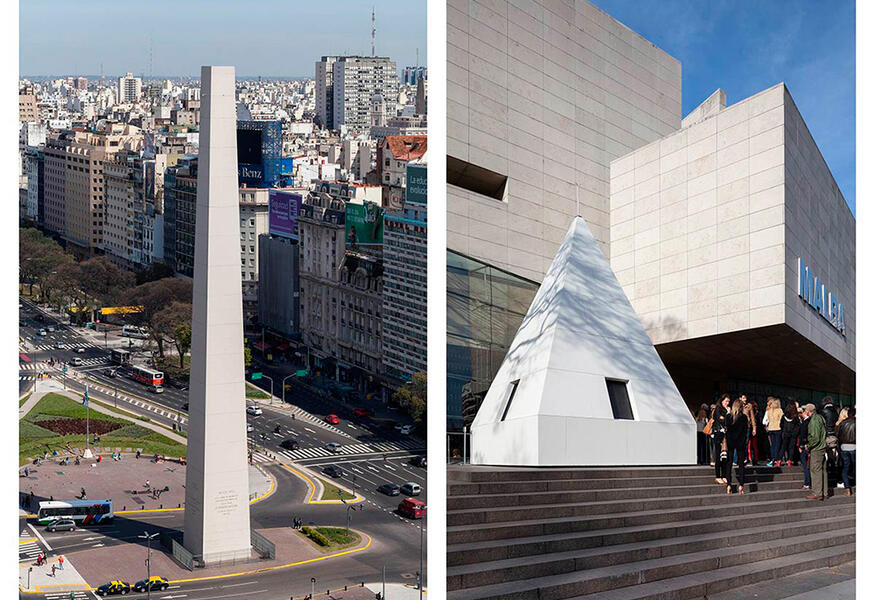 La democracia del símbolo [The Democracy of the Symbol], a site-specific action and installation by Leandro Erlich (Buenos Aires, 1973), is a work in two parts and with two durations. For a few days, the artist intervened on the top of the Buenos Aires obelisk, producing the illusion that it had been cut off. In conjunction with that action, a full-scale reproduction of the presumably removed top was placed on the esplanade of the Museo de Arte Latinoamericano de Buenos Aires (MALBA). The replica is designed so that visitors can go inside, thus providing a view of the city that the original obelisk does not. The removal of a section of the monument, as well as the fiction of transporting it and the choice of the new setting, not only formulates the artist’s political and conceptual agenda but also activates the senses.

Without contradiction, Erlich’s action can form part of the cultural history of the obelisk as a symbolic form. While as artifacts obelisks aspire to immobility, transport and dislocation have been—perhaps due to that very insistence on permanence—recurring practices in the history of their appropriations and ways of making sense. The obelisk enters the repertoire of Western forms as a passage celebrated by culture: recorded in prints, changes of location present engineering challenges and require technological ingenuity. From the trips from Egypt to Rome to the sea voyages on the Mediterranean and Napoleonic plundering, the history of obelisks is a history of transport and of new locations. Beyond its local effects and aesthetic-political meanings, Erlich’s intervention does not escape the cultural constants of this longstanding history.

The Buenos Aires obelisk in particular has been food for social discourse since its construction. It was widely and acutely criticized at the time it was erected in the Plaza de la República, before being reabsorbed by the local visual culture by virtue of its permanence. Erlich’s action restores this monument’s power to incite speech. During the days the tip was removed from sight, the obelisk was once again at the center of everyday conversations; it sparked expressions of surprise and was an excuse for criticism and speculation about what had happened.

The apex’s placement on the esplanade was organic and the piece blended into the museum’s architecture. It reproduces the original’s imitation stone, which was coated with cement when parts of the covering slab began coming off soon after its inauguration in 1938. This imitation of the imitation stone closely resembles its background—the limestone of the museum’s facade. Similarly, the emphasis on the diagonal lines playfully engages the superimposed volumes of Malba’s building. The fragment of this modern milestone is thus in tune with the museum’s deconstructive architecture. The effect produced is, initially, very different from both the light piece by Sergio Avello that was previously at the site and, undoubtedly, from the work by Jeff Koons that will replace it next April. 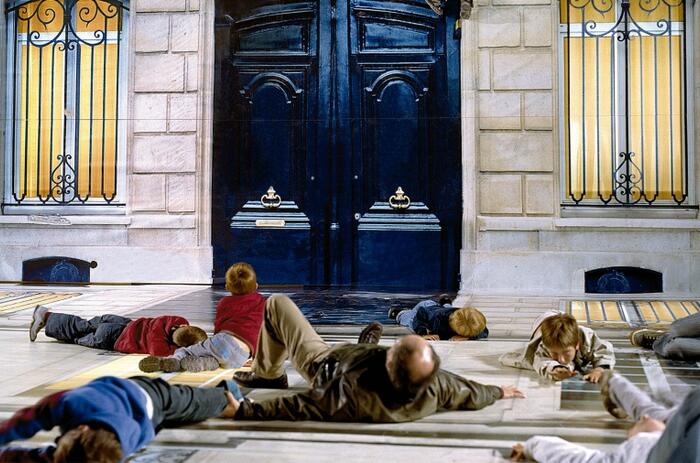 From June 26 to September 5, Leandro Erlich presents “Seeing is Not Believing” at the Museum of Fine Arts in Houston, an exhibition that challenges our perception of reality and distorts everyday situations under incredibly real visual effects.

“SEEING IS NOT BELIEVING”, LEANDRO ERLICH EXHIBITS IN HOUSTON