On the sill of what would later be the consecrated international career of Argentinean artist Leandro Erlich (Buenos Aires, 1973) it was painting. He himself remembers these days that with fifteen years old he considered himself a professional painter. His life then passed between films and oil paintings. Later came the installations and artistic proposals where the unique magic of Erlich submerges us in situations that extend the coordinates of reality to bring us closer to surprising visual and perceptive experiences. As if for a moment we could be part of the scene of a fantastic movie which opens a door and makes us one of its protagonists. 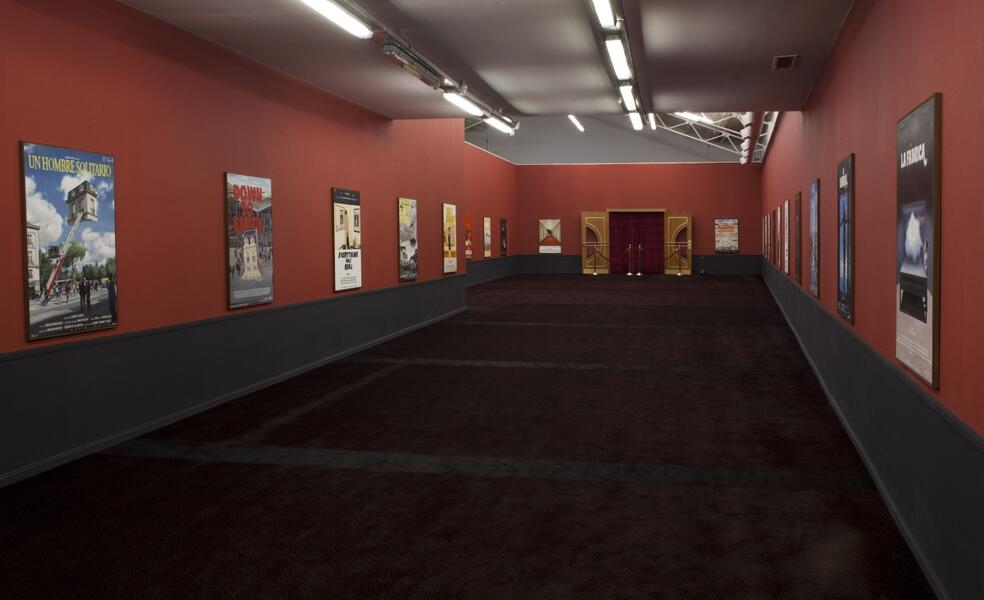 In the current show in Buenos Aires gallery Ruth Benzacar, the artist surprised us again. Coming Soon, the title of the exhibition, is inscribed on the facade of the gallery with a retro aesthetic of a cinema marquee with its light bulbs surrounding the edges. Below it, as posters, are the images of the films that are supposed to be screened. Upon entering the great room, acclimated with a black and embroidered carpet, characteristic of the late 80's cinemas, we find twenty-one oil paintings of film posters from photos of the artist's installations, painted for this occasion. The representation in each one then refers to a work that did exist and, in this way, works as a memory of his professional career. The one with the title Invasión (Invasion) refers to La democracia del Símbolo (The Symbol Democracy, 2015), when the artist made the point of the Obelisk invisible from the center of the city of Buenos Aires and made it appear at the entrance of the Museum of Latin American Art of Buenos Aires (Malba). One hundred days underwater is related to the installation La Pileta (The Swimming pool, 1999), where visitors could be part of the depth of a pool, with apparent water, without getting wet. And Down to earth is linked to Maison Fond (2015), which confronted the public to a house that seemed to be melting.

In each painting, the wordplay also give rise to humor, either through the titles or the technical specifications of each film. In all of them there is a same film director: Charlie Lendor, anagram of Leandro Erlich. We know that in the proposals of Erlich nothing is exactly what it seems and that, in turn, we can unveil the artifice which far from making our interest fall, increases it. Because it shares its strategy, because it invites us to be part of it, because it guides us without imprisoning us, because we feel that the possibility of placing ourselves without deception on the border between reality and fiction brings us closer to childhood, to that time of play characterized by the natural transition and transaction between fantasy and reality.

His artworks do not allow diving in his autobiography, but this time the artist decided to take as an artistic material a stage of his life that includes, above all, adolescence. "In the 80s, video clubs started to open in Buenos Aires. I remember standing in front of the VHS boxes that were outlined on large shelves; my eyes traversed the covers and their titles for a long time, " he wrote in the text for the present exhibition. He added: "The Scottish artist Andy Goldsworthy said that his art school was not the academy but the beach. Mine was the VCR. "

At the back of the gallery a thick curtain embroidered indicates that there is the entrance door to the projection room. At the boundary between the exhibition space, the spectator and the artwork is blurred. At one point we noticed that we are part of a great artistic installation -which in this case occupies the whole room- and that we can only see it if we enter it. We become, automatically, visitors to a cinematographic projection of another era that will not happen, because there are no films made. But in front of each painting, the imagination is activated guided by pictorial representation and we outline a possible film. We should add another ingredient: a certain vital nostalgia. As soon as we entered the gallery-installation we found a piece of furniture filled with VHS cassettes in the manner of a "small replica", as the artist points out, of the more than a thousand titles of the VHS family collection based on his father's cinephilia. Then the DVDs would come with another aesthetic and as part of another time.

All this reminds us Erlich with a retrospective look at his life and his work through his intelligence and artistic sensibility, by making us part in a universe very similar and, at the same time, different from the everyday.