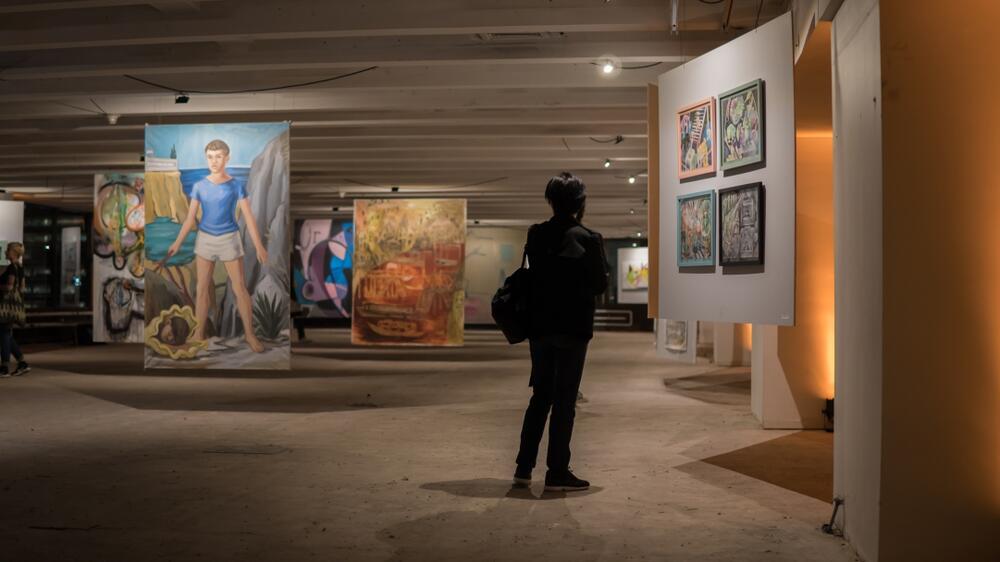 In a space with unrestored cement and a panoramic view of La Plata river, Le Le Lend exhibits more than fifty works selected by the artists themselves. Due to the size of the talents gathered and the space where the exhibition takes place, it is difficult to imagine something similar outside the institutions or galleries that currently lead the Argentine market.

Although they are not te only ones, the architects of this project are Eduardo Mallea and Cecilia Perazo de Mallea, in a way exogenous people to the art world. Collector and lawyer, Mallea has a close link with some of the figures that participate in the exhibition. As he commented, the idea of ​​carrying out this project had him crazed for a while and began to take shape after a series of encounters with artists in search of a suitable location. “Although the main objective was to generate an action that promotes national contemporary art, it also shows some dichotomies of the art market, "said Mallea and added:" Here there are only artists and viewers. " In this sense, Le Le Lend leaves aside all intermediaries promoting the self-management of those who expose.

With an evident figurative proposal - beyond some artworks like those of Codega, Pierri or Pruden- the Max Gómez Canle’s and Nahuel Vecino’s, Máximo Pedraza’s and Vicente Grondona’s or those of Lorena Ventimiglia’s and Juan Becú’s universes establish a symbiosis based on the painting itself. It’s from this great dialogue that the ten artists establish among themselves that the exhibition is constituted.

"We all went out to exhibit in the 2000s. Maybe that's why self-healing was so relevant," argued Grondona. In addition, he ironically described as "unreasonable" the exhibition and explained that as it was made from a "loving self-management" allowed him –such as to the other artists-  to bring more personal nature paintings or that had never been exhibited. Or as Gomez Canle expressed it, from a mutual self-admiration of artists with certain stylistic affinities.

Returning painting to that faculty of proposing utopias, Le Le Lend takes its name from there. Referring to Damien Chazelle’s well-known musical the exhibition proposes a revitalization these possibilities -sometimes somewhat overlooked- that painting as an expressive medium offered throughout art history. "As a fundamental instrument for society and its ability to imagine other possible worlds," said Gómez Canle.

Mounted by Fernando Brizuela, the works hang from the ceiling of the space, creating a unique microcosm where large format works predominate. The intimate charcoals of Pedraza contrast with the expressionism of Becú and the hyperrealist landscapes of Gómez Canle, the figurative characters of Vecino with the abstractions of Pierri, and so on. As Pierri expressed, behind this collective proposal, the ultimate goal is the "putting into dialogue of each language to establish the driving threads" among a group of creators that has been developing contemporary painting, simultaneously, since the beginning of the 21st century.