Peisajovich looks to Seurat’s color studies and his approach to the division of tones on the basis of the position of highlights of color to incite, at a distance, certain combinations on the retina. 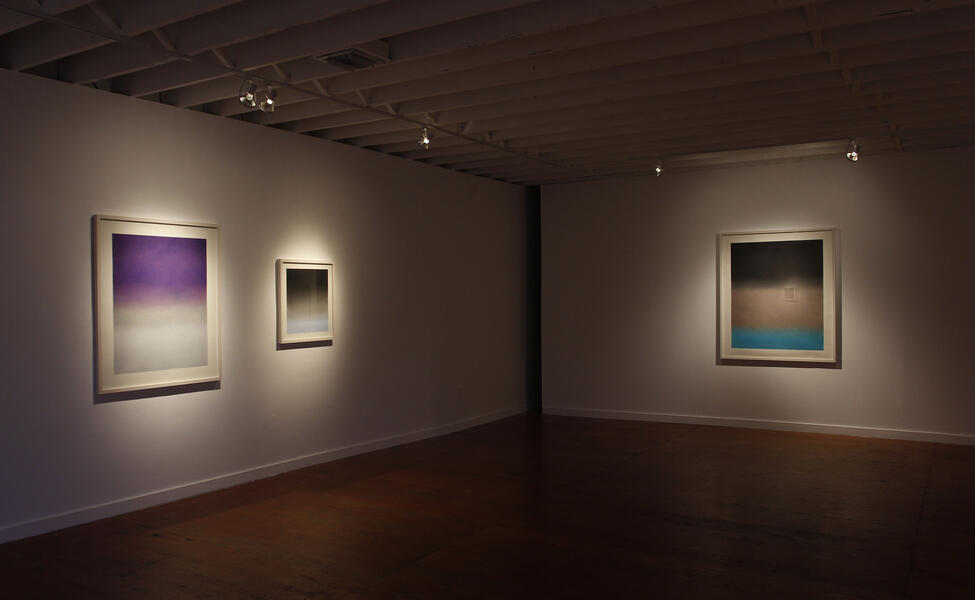 Karina Peisajovich (Buenos Aires, Argentina, b. 1966) is one of the most disciplined contemporary scholars of the phenomena of color and of light. In early explorations born of the refusal to represent light in painting, she found novel ways of projecting it into space and of turning it into a medium in its own right. In her recent abstract drawings, Peisajovich constructs “atmospheres of color” by means of a subtle form of pointillism. Using only the tip of the pencil, she colors downward to the middle of the surface with a “gradation” technique that goes “from color to nothingness” and then does the opposite, in another tone, downward.

Peisajovich looks to Seurat’s color studies and his approach to the division of tones on the basis of the position of highlights of color to incite, at a distance, certain combinations on the retina. But insofar as they are devoid of any recognizable image, even reference to the horizon line, these drawings give us the sense of being transported into the vastness of the empty space on which these ethereal colors—“gradients” as the artist calls the series, in a Latin term that refers to the increase or decrease in quantity in physics, here applied to color—seem to float. Formally, the works may be reminiscent of Rothko though they are, in fact, more akin to Albers.

On these sheets of paper colored to the last millimeter, light emerges as a subtle quality to be appreciated by the eye: it is the effect of looking intensely at these vague endless planes that hold so many tones. What we see, in a certain way, is the astonishing creation of color that reflects the painstaking process of making the work, an inexhaustible addition of points in space to unleash meditation in time.

If a work by Turrell is the closest thing we have to the prodigious light of creation, Peisajovich inhabits another frontier. What interests her is, on the one hand, the history of artifacts in human pursuit of light and its representation—that is why she has followed visionaries like Raymond Roussell, who imagined painting machines—and, on the other, awareness that the construction of images in perception is a fragile and unstable process. In the artist’s own words, her works formulate “that battle between light and darkness that changing colors are.”

The origin of this series lies in her Teoría del color [Color Theory], where the artist researched the genealogy of such theories. Due to the painstaking and slow manual work that each drawing requires and to the mental state that that production processes induces— Peisajovich describes it as “an almost mantric process”—the sensorial experience that these works induce is like a set of new meditations on color and time.

The installation Todo lo que se hunde en la luz es la resonacia de la que emerge la noche [Everything that Sinks into Light is the Resonance from which Night Surfaces] is an intervention on the gallery’s lighting system. This work gives rise to a meditation on light in space and on our perception as a whole. Peisajovich, who worked as a set designer early in her career, manages to rid light of its standard function in exhibitions, that is, “to give the works a theatrical effect.” Her intervention undermines the rules: the only work there is are the light plays that hold art’s power, the power to transform vision.

Paraphrasing Barthes, Peisajovich attempts to reach image in the zero degree. It’s a question, the artist explains, of “going backward in the process of conforming the image and removing any residue of form to bring to the foreground the battle of light.” That is what the work is. The title of the installation makes reference to a phrase that is repeated, with variations, five times in Jean Luc Godard’s film Alphaville in which the lead character, a detective, photographs absolutely everything he sees. What the viewer finds here are modifications in the lighting system as it is projected onto the floor or altered to upset the perception of the space such that the viewer him- or herself is what is lit. The lights are aimed at the entry to the space and they ask the viewer, like the secret agent in Alphaville, to turn his or her attention to what usually goes unseen in an exhibition: the unsteady visual atmosphere in the space that contains only the fluctuation between the visible and the invisible, and the viewer’s own dialogue with the light and with perception of space and time when forms have vanished.