Cameo ambitiously takes the shape of a multiple device that, in two different phases, provides an expanded experience of Tessi’s work. 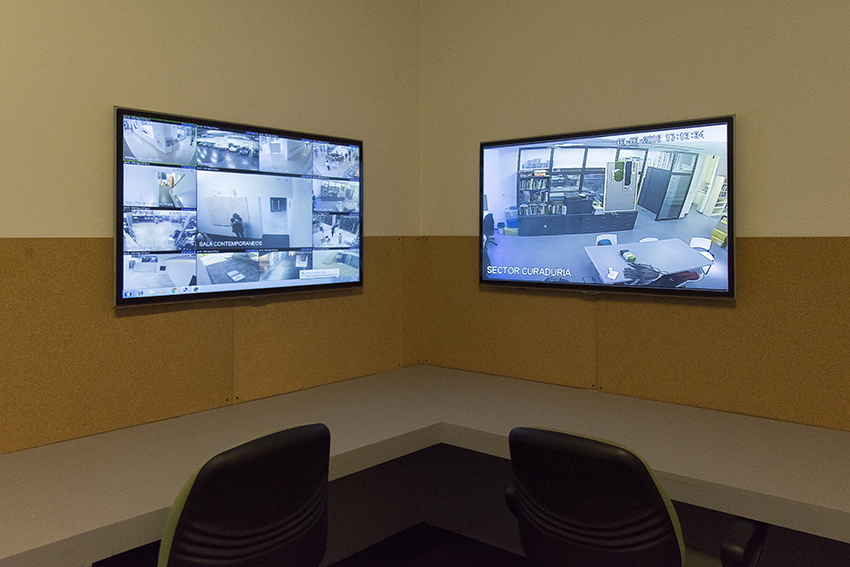 Starting with the paintings of photographs and movie stills taken from the digital deluge, through the vortex of the Beca Kuitca and these most recent works where, by means of volatile, alchemical, and surgical exercises, he explores the organic and inorganic possibilities of painting, everything Juan Tessi (Lima, Peru 1972) has done with—or against—painting seems to adhere, closely and stubbornly, to a single axiom: turn any surface into a border, that is, a space of convergence and of divergence, of exchange and of conflict.  Cameo is the name of the project curated by Lucrecia Palacios that Tessi created specifically for MALBA’s Contemporáneos room. Cameo is, according to the wall text, “one and two exhibitions at the same time”; it ambitiously takes the shape of a multiple device that, in two different phases, provides an expanded experience of Tessi’s work.

In the first part, Tessi’s work was subjected to complex spatial and discursive interference that, in its way, set out to remove the institutional veil that conceals the museum’s mechanisms—at least those deployed for the production of shows.  The gallery was divided in two parts. One of them housed a series of presentations and informal lectures by artists, curators, and theorists that attempted to interrogate the constellation of meanings at stake in Tessi’s work. The texts of those presentations, transcribed, will form part of the exhibition catalogue. The other part was equipped like a security booth: two screens showed live images captured by thirteen of the museum’s security cameras. In their cameo, Tessi’s works, strategically placed before the cameras, shifted viewers’ scopic regime and, in so doing, disclosed an alternative museum landscape—the offices, passageways, terraces, and so forth beyond museum-goers’ vision. Once a week, Tessi would use this space, his “office,” to produce a film with the fragments of the videos from the previous days.

For the second stage of the exhibition, the gallery returned to its habitual appearance. The works, which bear the traces of activations in space and of the prostheses that held them up for the cameras’ scrutiny, come to the gallery enlivened by the hau of their previous experience. Once in the gallery, though, Tessi’s paintings resist giving up the fragmentary experience of the screen; they give shape to a dynamic, irregular, and unstable geography. The works seem to confront or to turn their backs on one another, overlapping at times. They resist their fate on the wall; as if aware of Perec’s statement “Pictures efface walls. But walls kill pictures,” they are determined to escape.

Most of the works exhibited in what could be considered a deliberately partial, oblique, and unsystematic retrospective of Tessi’s recent work—the only sort of retrospective capable of representing work whose agenda is endless wandering—were produced especially for the show.  One of them—a favorite of young and old—had floundered frenetically on a column on one of the museum’s upper levels and now endures its pendulous Sisyphean fate at the hands of the blind rhythmic pulse of a small engine. The works over there, in acrylic boxes, the ones that had been left out on the terrace in the April rains, now enjoy the evanescent and phantasmagoric afterlife of cryogenic bodies. In front of them, three canvas stretchers on wheels holding monochrome planes eagerly await members of the museum’s Education Department to apply another layer of paint and to take them for a walk around the block the way they used to during the first part of the show. The title of this work, La triste historia de Elena y Nicolás [The Sad Story of Helen and Nicholas], recalls the televised execution of the Ceaușescus; it, along with Mántica [Mantic], an oil painting suggestive of a wavering reframing operation, is the only moment in which the works on exhibit take video as theme. Other works—mainly the ones whose title is the code for a digital image in Tessi’s computer (nz3806g0IZsgcgqyo1_500)—do suggest a very personal crossover between media rooted in the “photographic paintings” that Tessi stopped making a decade ago.

The production of a number of these paintings makes use of the surgical procedures characteristic of Tessi’s work in recent years: amputations, peelings, prostheses, grafts, and transplants constitute a plastic cast of shapeless bodies stitched together. Ceramic heads, sheets of acrylic, unprimed canvases, abstractions of all sorts, as well as an occasional figurative work with an unfathomable point of reference and the three works produced during the exhibition’s first stage (the video and—in oil paint and felt pen—a timeline of the events in the space and a diagram of the works’ layout): that is what Cameo is about.

Or perhaps it is about the dim and veiled palette of grays and pastels with which the artist barely insinuates his forms—suggestions of an imperishable underpainting. Perhaps it is about the instability, the existentially unfinished and temporary quality of works that, in their muteness, banish the dominant testosterone-driven painting tradition. It could be argued that, in essence, Tessi’s works form part of the universe of “unworking,” that wasteland for the Western tradition that Agamben placed between potency and act, a zone peopled by unrealized potencies.

Unworking, that singular form of inoperancy, is the fate that theologians have envisioned for the blessed after Judgment Day, when they have left behind all their toil and the useless baggage of flesh. Perhaps a similar fate awaits Tessi’s work when it has crossed all its borders, exceeded all its surfaces, when no more makeup, skin, or organs can be removed from it or photographs taken of it. Perhaps that is what lies in the hereafter for Tessi.