Julio Le Parc. Un visionario (Julio Le Parc. A visionary) is the title of the largest retrospective of the internationally recognized Argentine artist currently exhibited in the city of Buenos Aires. The impressive exhibition displayed at the Kirchner Cultural Center (CCK) offers a new opportunity to put a career in the service of research, experimentation, artistic reflection and creation committed to its time and to the viewer in historical perspective. 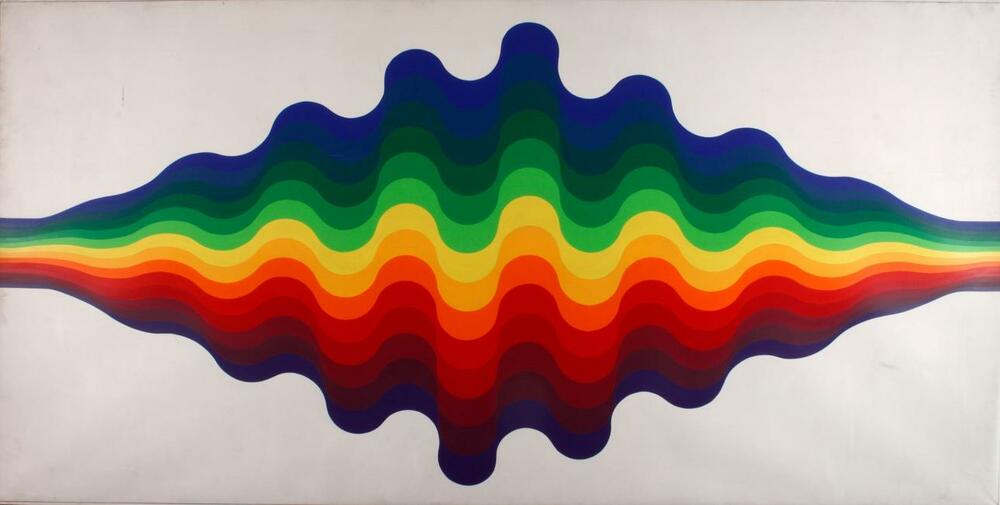 90 years old Le Parc (Mendoza, 1928) toured with enthusiasm and vitality this sample tribute, composed of 160 works from the late 50s to the present. Drawings, gouaches, acrylics on canvas, light sculptures, large mobile installations, light works, participatory games and a new virtual reality space follow each other room after room, introducing us into a universe and a unique experience of lights, shadows, colors, shapes, spaces and movements. A pioneer in kinetic and optical art, and one of his great representatives, the artist settled in Paris in 1958 and, two years later, founded the Groupe de Recherche d'Art Visuel (GRAV), which remained for ten years. Before, in Buenos Aires, he studied at the School of Fine Arts and was in contact with the local avant-garde of the Concrete-Invention Art group and with the teachings of that other great Argentine artist, Lucio Fontana.

Gabriela Urtiaga, curator of the retrospective, points out that “(…) in the early sixties, Le Parc's career is marked by a thorough study of the artistic object, the infinite multiplicity of results from a minimum use of resources , the reflection on color, light and movement; all of them, issues that come together in their greatest concern: perception as a state of convergence between the sensory and the intellectual ”. In 1966, the artist won the International Painting Grand Prix at the Venice Biennale.

The movement and the role of the spectator were always two matters of permanent inquiry. In the beginning he turned to white and black and then worked with his characteristic palette of fourteen colors to this day. Among his series we find the Modulaciones Modulations), which pose dynamic undulations of the two-dimensional plane, while in his later Alquimias (Alchemies) he composes figures in motion through a process similar to pointillism.

The first examples of kinetic art in its production are the Contorsiones (Contortions) –generators of visual illusions-, which are activated by a motor or a crank. Meanwhile, in several of the artworks with light and movement, the viewer literally immerses himself in them to experience transformations. Also the spectator and his point of view are fundamental in the series Desplazamientos (Displacements), where his presence energizes the reflective materials, the fragmentation and the movement, to give rise to modifications of the forms and the reflections that alter the appearances.

In the exhibition could not miss his famous famous Móviles (Mobiles), one of them donated definitively to the CCK in 2016, which stands imposingly high with its bright blue when entering the building. Another space is dedicated to games that include surprise, humor, and in some cases, political content.

With each proposal, our body is impacted and taken to be part of both two-dimensional works - we look at them again and again, we are captivated by chromatism, light contrasts, movement - and those who invite us to introduce ourselves in their spatiality - we are part of their dynamics, we activate them, they transform and transform us.

Le Parc explained his political commitment on several occasions: he participated in French May in 1968 and was part of the movements opposed to the military dictatorships of Latin America in the sixties and seventies. In this exhibition is the collective work La Tortura (Torture), carried out by the Denunciation Group in 1972, of which he was part. This is a set of seven large canvases, realistic aesthetics, to denounce the repressive and bloody actions of the military governments in Latin America of those decades. This retrospective is part of a national tribute to Le Parc, which will have as a complement a sample at the National Museum of Fine Arts, from August 13, which will cover its first decade of work before settling in Paris, with the title Julio Le Parc. Transition Buenos Aires - Paris 1954/1959.

We travel, thus, the complex and, at the same time, accessible and necessary artistic world of a visionary, who until now makes us protagonists of his utopias. And because after moving his works we observe the everyday world with a different light and sensitivity.

Julio Le Parc. A visionary. Until November 10. Wednesday to Sunday and holidays, from 1pm to 8pm. Sarmiento 151. General admission: $ 100, includes admission to the exhibitions of Julio Le Parc in the CCK and to the sample Julio Le Parc. Transition Buenos Aires - Paris 1954/1959 in the National Museum of Fine Arts. Children under 18, students, teachers, retirees and people with disabilities, presenting accreditation: free of charge. Wednesday, general admission free of charge.