The exhibition Ríos y Silencios (Rivers and Silences) was a milestone in the Colombian art scene. Juan Manuel Echavarría (Medellín, Colombia, 1947) staged a vision of the recent history of armed conflict in the country capturing the war and its consequences with iconic power and universal poetic language. 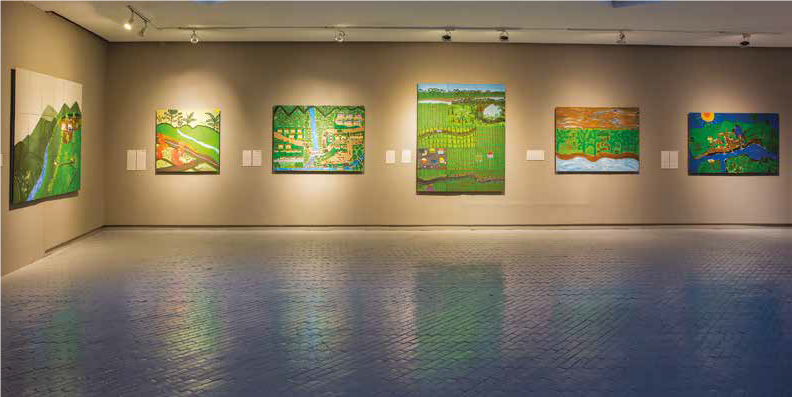 Over the course of his production, Echavarría has addressed the complexity of the conflict from multiple perspectives that, together, constitute an cumulative and coherent approach. The coordination of the formal and the conceptual is flawless: the production of his works, which unfold in ambitious series, is strikingly clear and concise. Fruit of a resounding and innovative curatorial proposal, this show’s integral installation constructs a polyphonic retrospective that examines the artist’s theme through an array of visual languages and voices, not only Echavarría’s—which is thoughtful and introspective—but also the explicit and cathartic language of members of the army, of guerrilla and paramilitary groups, that is, participants in the war’s violent episodes in the countryside.

Since the nineties, Echavarría has explored remote parts of Colombia with photographers and filmmakers Fernando Grisales, Noel Palacios, and Gabriel Ossa (all of whom are credited as co-authors) to make visible and document the violence that has ravaged the country, showing the vestiges of what the title of an earlier exhibition calls a “war we have not seen.” El testigo (The Witness) 1998, consists of photographs of an emaciated horse forlorn in a desolate landscape, an image that undermines the heroic horse motif in art history; El árbol de Tamarindo (The Tamarind Tree) 2010, shows a single tree, sole witness and point of reference of the peasant massacre that took place under its branches. In the video Guerra y Pa(z) [War and Pea(ce),] 2001, two parrots precariously resting on a perch fight and squawk the Spanish word for war and the beginning of the word for peace in a parody of Colombian political negotiations and their discourses. It was in Bocas de Ceniza, 2003, series of works in video, that Echavarría started to engage and to give voice to victims. Those works show close-up images of the faces of Afro-Colombian survivors of the war who describe their experiences in song; Echavarría addresses their vulnerability in a work steeped in emotional intimacy and in empathy. In the photographic installation Requiem NN, 2005, members of the Puerto Berrio community perform a spontaneous act of solidarity, memory, and resistance by gathering corpses in the Magdalena River and burying them in the community’s cemetery; each of the bodies is given a name and adopted by marking their gravestones in a ritual of prayer and acceptance that bestows onto the anonymous dead new identity and life.

Though a retrospective, this show breaks with the paradigm of the artist and authorship as central figures. The exhibition does not revolve around Echavarría’s voice; he is defined, rather, by connection to the voices of others, with whom his work dialogues in complementary fashion. The show includes a selection of paintings from the La Guerra que no hemos visto (The War We Have Not Seen) series, 2007-2009, works created by men and women who, from a very young age, came into contact with battles, massacres, and extreme violence. Later, for a two-year period, they were invited to participate in cathartic workshops—organized by the artist—intended as spaces of encounter and reconciliation. The exhibition includes as well a selection of works from the monumental Silencios (Silences) series (2010 to the present) with photographs of over one hundred abandoned schools in a state of extreme disrepair—evidence of the interruption of basic community activities due to forced displacement. The frontal photographs of walls with blackboards still up attest to layers of memory in roofless places invaded by vegetation. Remains of teaching supplies mingle with objects that evidence the later uses of these run-down settings. The masterful pictorial quality of the saturated colors in the photographs brings to the surface layers of memory: traces and blotches of paint and mold stains become formal elements that create a landscape and reveal that other “painting” made by time and neglect. The same pictorial and chromatic sensibility is at play in the photographs from the De qué sirve una taza (What’s a Cup For) series, 2014: close-ups of objects left behind in army camps and the greenish layer of rust, moss, and vegetation that covers them. The retrospective Ríos y Silencios is, then, an extraordinary project in the construction of collective memory. It provides us with a glimpse of the redemptive power of an art that, insofar as space of convergence and shared reflection, contributes to the construction of the social fabric. Echavarría takes an ethical stance against indifference. He builds empathy through a process of restoration in a context of dehumanization. For him, art does not revolve around objects but around the connection between human beings.