Hugo Aveta lives by his work in that infinite universe of halftimes that avoid and survive finiteness. 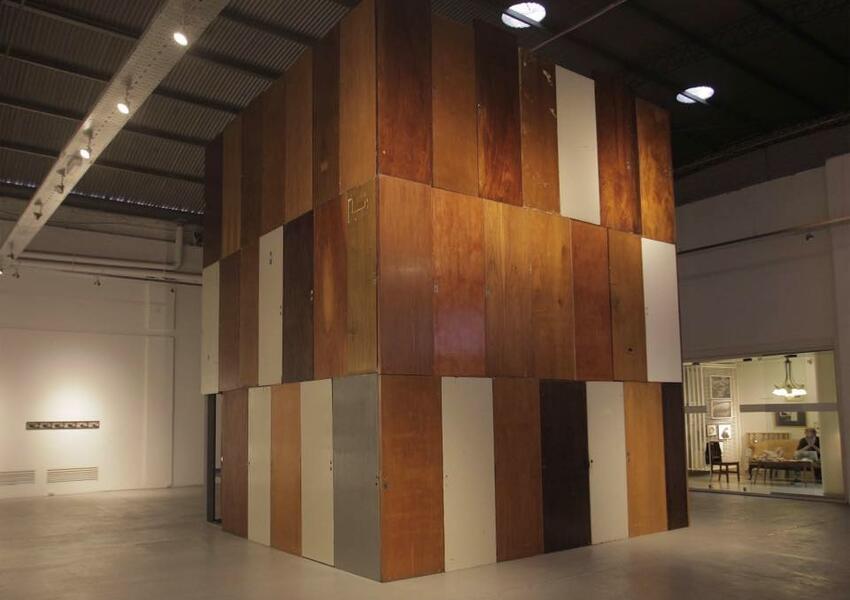 Untitled, out of titles, the best way of remaking our memory.Towards everywhere and at the same time a centre. The overwhelming image passes through un with its distinctive feature of giving sense to memories, to the memory. The wordlessness a silence that is not such because it has the apparece of the silent language experienced in front of a work of art, when feeling, when naming with a voice that is, at the same time, silence. HA is the builder and doer from the distance, breaking down the time. Ghosts attend without attendance, and lineal time is not his quest.  His eyes are beyond wich make his doing an archelogy playing permanently with the unsubstantial and the real place. HA lives by his work in that infinite universe of halftimes that avoid and survive finiteness. A time cannot be named. HA goes after that.

We see interesting things. The image touches the aesthetics, grabs us. There is calm and tension. A glimpse leaves us unsettled, and a step slightly beyond alerts us. What are these images hiding from us? It is not about that. The tale is not about the invisible, but about what is unseen, the breaks, and the crashes of time and of the times. HA builds a distance, always leaves a clue, to make us think twice, to cast doubts on the truthfulness of the “document”.

In the mock--‐up, perfect, some pictorial trace always unveils itself not so realistic. We see the gesture, the shake and the hardness to proceed with accuracy inside a little shut--‐ in space. That is the strangeness we feel when wandering around his spaces, sinking into darkness or covered by a violent light. Doors are a whole cosmos of the half--‐ open; two symbolic directions arise from doors; however, in these installations, HA gives them another sense, making them walls in a journey towards meeting the being of a space.

Inner walls survive, build, without speaking, tell, keep land registry, a quasi-social topoanalysis.» The being that possesses form dominates thousands of years. For every form retains life and a fossil is not merely a being that once lived, but one that is still alive, asleep in its form» (G. Bachelard)

A door that opens and closes encloses showing and hiding --‐the document as image, act, and symbol… the journey, the move, a symptom to see again what has been stored and maintained for being too good or too bad. Time and space coordinates are mingled.

There is an organism of matter, form and images in motion which pass through it far and wide, from afterlife to the here and now, surpassing their lifeless state. HA unveils and rescues ghosts; he displaces things –the objects where ghosts survive- while he proposes shifting, following a path, moving towards the field, leaving behind the earthly self to attend a meeting with a space as a ghost town. There, the file, where all the times converge and paradoxically everything seems to be dead, is exactly where the survivors live, to whom a gaze returns a time. «Survival will not act as the symptom in the completely dead, but the other genre of life of the things that have passed and continue visiting us» (G. Didi Huberman)

There are gestures in society, in culture, discomforts that talk about a social body giving signs, sometimes hiding them. The symptom appears shows and tells that failure.

The image, when showing, is the symptom. The artist is the builder, taking us closer (in the bad states) to ask ourselves What happened? What happens? Time opens or closes doors depending on where our eyes are located. The gaze, the sight, as the sensitive guide in front of a work of art, split and repair times and spaces, giving sense to the feeling.

Each one should name. HA, as an artist, as an architect of past time, makes us face up to a thermometer that measures our temperature, our fever. In his images, his work, his file, there is nothing he wants to name; his proposal his to each one of us is that our gaze should give them a name.