Medail presents an exhibition in where debate is the obsessions with perfection with roots in romantic thinking of a documentary photography that aspires to be ontology: to show the essence of things exactly as they are. 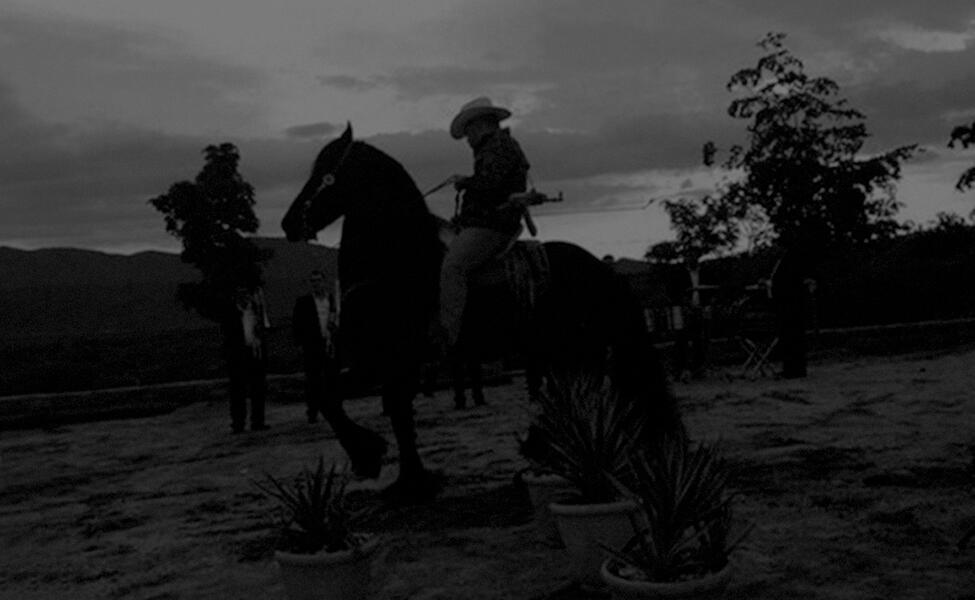 It is difficult for us to determine whether there is an ironic, condemnatory or revisionist gesture behind this project. We know that there is an intertextual operation that is not fully specified. We also know there is a silence that is thoroughly significant. We discover ourselves immersed in it in the absence of a gallery text or some equivalent support.

The series exhibited by Medail (Argentina, 1991) consists of photographs taken by tycoons, which they themselves have uploaded onto the social networks and which are currently exhibited, under a different guise, transformed into gelatin silver prints. They portray scenes that exteriorize the intimate, in that same interplay between public and private that suggested to him the title Extimidad (Extimacy) for a previous exhibition. On this occasion it is also a question of the visual production of subjectivities that we might call extimate. But the scenification of the “I” is carried out this time through a substitution, through the display of the consumed objects and the signs of control over the territory. Atrocious but aesthetically effective signs, like the full body portrait of the boy holding a long gun that remits to Manet’s Fife Player.

A possible hypothesis for interpreting this exhibition analyzes the validity of the documentary genre in photography as an attempt to render the real present –represent it – in light of the current media universe. Under debate, in sum, are the obsessions with perfection with roots in romantic thinking of a documentary photography that aspires to be an ontology: to show the essence of things (rather, of remote or ultimate things) exactly as they are.

Indeed, the exhibited photographs are not the result of a mobile device whose purpose is to interrogate an ‘other’ in order to restore him his truth in the form of images, placing him under the light bearing regime of documentation. This operation would not be very imaginative in terms of aesthetic politics. And it would be unnecessary. This ‘other’ has kept one step ahead in the task of representing himself in his excesses and in an excess of representation. He has not presented any resistance to celebrating himself in the documentation of his existence. The operation consists, instead, in compiling and transferring, in designing for these images a new way for them to show themselves.

Neatly framed, the photographs have been copied by hand. We can recognize a resonance with the canonical procedures in the history of photography; the deviations with regard to the rule – the non­continuous display and the underexposure – confirm the parodic distance in relation to it. Reduced to black rectangles, they stubbornly simulate to be blots until we move closer and observe in detail. This drawing closer does not, however, nullify the initial impression, but rather establishes an oscillation analogous to that of a pendulum, an ambivalence of the gaze.

Modern­day, state­of­the­art images, which have grown in the margins of present­day global information machinery, have been transformed to adopt a modality from the past. The past understood as genre: a predictable, worn­out horizon of subject matter and techniques, in sum, the past that inhabits us daily due to the inertia of clichés. But also the past as object that shapes and that wants an archaeology­loving present, a present that loves the origins: the one that is built inside a sensitive device, with museographic techniques that determine its date and time period, that isolate that object as one that belongs to the past.

The cleverness of this exhibition consists, precisely, in dislocating the origin. It inserts it there, where one goes to look for it, in a genre suspected of having a privileged link with the origin: documentary photography. And it also situates it in the typical places where the trade of old relics makes it emerge, in its hygienic parergon. But we know that this allocation of past time does not coincide with the historical origin, with the effective beginning of these images in the torrid Central American present.

The exhibition is not restricted to bringing up once more for consideration the death certificates of certain photographic documentalism that claims the right to place the people it portrays in the hour of history or in the light of truth. It discusses something more than the self­evidence of the things in the image. The silent rhythm of the pictures comments on the ways in which we demand from objects antiquity and remoteness; no less than two conventional forms of truth.