The apparent working of nature’s chance in Federico Colletta’s process is actually a strategy, a partial loosening. 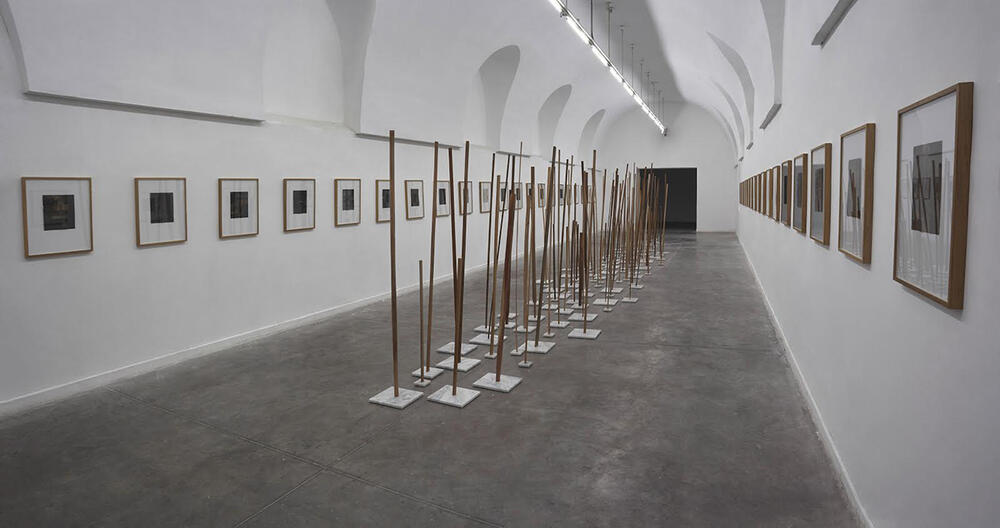 I cannot imagine any approach to Federico Colletta’s current work that is not tied to the landscape or natural surroundings of Los Cardales, the town on the outskirts of Buenos Aires where he lives and works: that specific setting is, arguably, what has given meaning to the body of work he began producing in late 2010 and 2011. These new works question his previous pictorial practice as they delve into the metaphorical implications of a type of production linked to process, on the one hand, and to the logic of nature, on the other. This was how the artist began burying his canvases in holes dug to size (they measure 1.80 x 0.90 cm. each) or leaving them outside so that the weather (wind, rain, etc.) and the workings of the environment would create an image closer to the action of nature than to its representation.

The common denominator of all these works is a particular monochrome resulting from the color of the earth and ash, and the effect of humidity on the canvas. The apparent working of nature’s chance in Federico Colletta’s process is actually a strategy, a partial loosening. Why? Because once the canvases are salvaged after periods of up to fifteen days of hibernation, the artist scrubs them and then hangs them out to dry. In so doing, he “reverses the act of painting, which entails adding substance, by performing an act that entails removing matter from the canvas,” he explains. Finally, he performs a formal action, placing the canvases in stretches that he himself makes. The serial display of the works brings to mind minimalist strategies of order and repetition.

Throughout the process, he takes notes that evidence his daily activity. Papers that have performed different functions (tablecloths, napkins, handkerchiefs, wrapping paper, purchase receipts and receipts from toll booths) and bear traces of the body. Regardless of their specifics, all the pieces of paper make reference to the hustle and bustle of the artist’s life, while his canvas lie in a hole in the ground, becoming infected with the components of the soil and participating in an organic logic. These two instances formulate a confrontation between two dimensions of time, one that acts on the artist and one that acts on the canvases in their organic rest. And this is the point where the coordinates of space and time that somehow strain those variables in art and its forms of representation or presentation intersect.

It was on this premise that Federico Colletta brought together last August two major installations for exhibit in two galleries of the Centro Cultural Recoleta, a former convent whose monastic past is still evident in the architecture. In one gallery, he showed the works in canvas stretches under the frames of the building’s arches and resting on wooden pillars in a sequential rhythm. In the other, he placed a set of upright pieces of wood like a dry forest. This second space placed emphasis on the definition of a work of art on the basis of what the artist has at hand, on the basis of what grows and dies around him.