El Dorado, as part of the exciting Bogotá art scene, to continue to provide visibility to processes outside the mainstream that are committed to a historical mission. 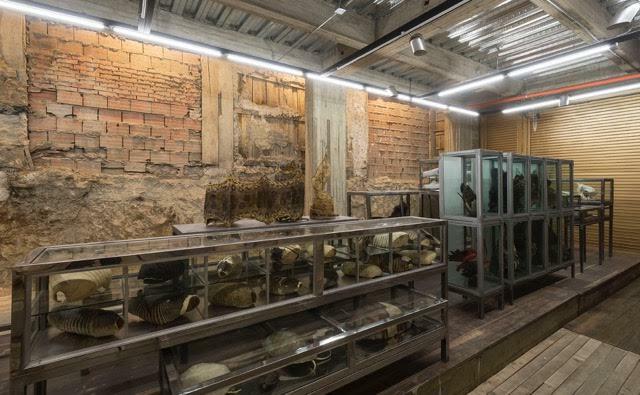 First came La Bachué then El Dorado. Slowly and carefully, Colombian art collector José Darío Gutiérrez has put together a series of publication and art projects that have made him a major advocate of Colombian art. In order to make up for glaring lacks in the historical memory of a country embroiled in a longstanding armed conflict, Gutiérrez’s first project was La Bachué, a publishing house that put out a series dedicated to re-examining the work of sculptor Rómulo Rozo—specifically the work Bachué from which the project gets its name—as well as the early production of Fernando Botero and others. Gutiérrez’s most recent initiative is the conception and construction of El Dorado, a space located in La Macarena section of the city where many artists gather. Even before it was fully constructed, the lot on which El Dorado is located—a virtual urban wasteland—was the site of projects by artists Wilson Díaz (2013) and Camilo Bojacá (2014). Later, after the first section of the premises had been built, shows by Eduard Moreno (2015) and Jorge Ortiz (2015) were held. In February 2016, the doors to the new spacious building with four galleries were opened. El cuerpo de adentro, the first exhibition, was a solo show by Leonel Castañeda featuring collages, an installation, and a large collection of objects, books and other publications, as well as animal remains like fur and bones. The aim of the show was to grapple with the relationships between the death drive, the clinical, the surgical, the pornographic, and the sexual.

Silicios, a group show curated by the very young Valentina Gutiérrez, fit seamlessly into a curatorial proposal with a distinct interest in the bodily. Seen in perspective, El Dorado’s programming has combined a longstanding artist largely inactive on the exhibition circuit in recent years like Jorge Ortiz, very active artists also involved in art criticism like Wilson Díaz and Eduard Moreno, a largely unknown artist with an extensive body of work like Leonel Castañeda, and a very young artist like Camilo Bojacá.

Looking towards the future, the plan is for each artist to present an ambitious project for each of El Dorado’s three levels (that is what Castañeda did). It is not too much to hope for El Dorado, as part of the exciting Bogotá art scene, to continue to provide visibility to processes outside the mainstream that are committed to a historical mission.