Eduardo Costa, inside and out, review by Aimar Arriola
| February 08, 2018 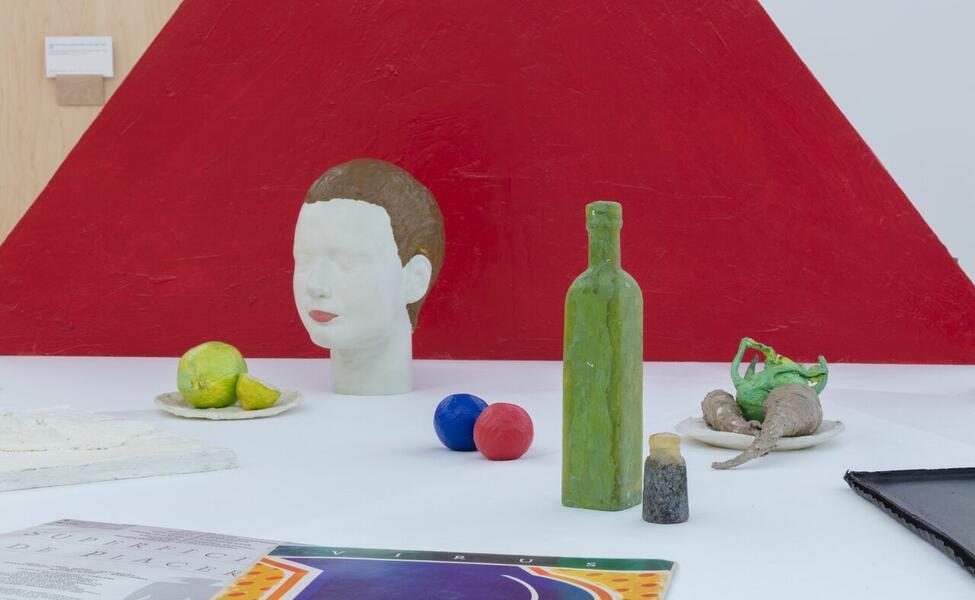 Like a fresh egg splitted in half that stresses with its fracture the distinctions between exterior and interior, between surface and depth, so I feel the work of Eduardo Costa (Buenos Aires, 1940). Precisely, with the action of opening an egg-shaped painting in public -an action I was able to attend-, Eduardo Costa inaugurated his retrospective exhibition 'Las relaciones mentales', curated by Manuela Moscoso and Santiago Villanueva at the Museo Tamayo in Mexico City, recently closed. During the action, Costa's egg-shaped painting was just that: not the pictorial representation of an egg, but an ovoid object produced from the superposition of layers of acrylic paint, as is the case of other objects shaped as fruits, vegetables or fish belonging to Costa's extensive series of 'volumetric paintings'.

In Costa's gesture of opening a painting in half to show us its inside, there is no attempt to assign greater value to the interior of things. On the contrary, there is no higher order of things here that others depend on, supposedly belonging to a lower plane. There is not a negative characterization of the superficial in favor of the certainty of the depths. Art, politics and life in Costa´s work rather operate in a continuous transit between inside and outside, between surface and depth. The smooth curves of his 'soft paintings' of the mid-90s, the gold ear as a second skin of the well-known series 'Fashion fiction' (1966-84), or the aforementioned series of 'volumetric paintings', all included in the exhibition, are invitations not to stay on the surface but to laterally slide through it. Those of Costa are libidinal surfaces, surfaces of pleasure, like those that sound in the album of the same title of the group Virus ('Surfaces of pleasure', 1987), included in the exhibition and for which Costa co-wrote a song with Federico Moura, the band’s leader. However, if it would have a biological form, Costa's work would not be a virus but a symbiotic body, a practice resulting from the association with others, concretized in his collaborations with Roberto Jacoby and Raúl Escari (manifesto 'An art of the media', 1966); with Jacoby and Juan Risuelo ('First audition of works created with oral language', action that took place at the Di Tella Institute in Buenos Aires, in 1966); or with the North American sculptor Scott Burton (friend to whom Costa dedicates an installation in the exhibition).

In Costa, the opposition between surface and depth leads to sliding, to continuity. The exhibition was not arranged chronologically nor established distinctions between the orders of things; instead, works and documents from different periods were arranged in an associative way on the curved and ovoid surfaces of the museography devised for the exhibition, feeding on the nutrients offered by Costa's own work, inside and out.