In his new exhibition, Diego Bianchi elevates trash to the plane of what is called art. 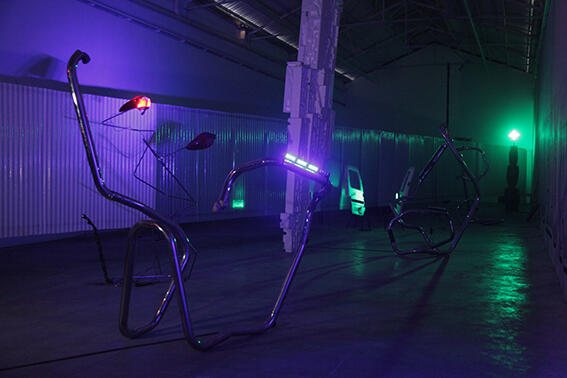 1934, Hannover, Germany. The allies bomb the city and Kurt Schwitters’s Merzbau—the first work of waste art—falls amidst people and buildings. Not collage, sculpture, or architecture, the work was a column of waste that began in a corner of the artist’s home-studio and gradually took over the entire room. For Schwitters, The Cathedral of Exotic Mystery, as he called it,was a monument to what had been and no longer was. An ordered chaos that acknowledged the passage of time and redeemed aesthetically the natural wear of things. A rite that aspired to be unending.

2016, Buenos Aires, Argentina. Sirens are heard. A flashing blue light takes our breath away. Two tail lights and a number of exhaust pipes. Car parts. A single way out through a tin wall. You can either crawl under it or pay a bribe to get around it. On the other side is a floodlight. Alarms. Television sets turned on—heard, not seen. Rotten fruit and cigarette butts. Tottering objects, filth, and disorder. Vanitas contemporaneus—a current image of the uselessness of mundane pleasures and of earthly objects given the certainty of decay and death.

At the city’s outer edges, just a few blocks from the third most polluted river in the world, is Barro gallery, written in thick oozing typeface. That is where Diego Bianchi (Buenos Aires, 1969) elevates trash to the plane of what is called art. The artist now adds “Shutdown” to a long list of exhibitions with apocalyptic titles that make reference to computer terminology and to criticism of today’s society: “Estado de Spam” [State of Spam], “La isla de los links” [Links Island], “La crisis es estética” [Crisis is Aesthetic]