Ortega makes use of three elements steeped in symbolism due to their nature as objects and to the temporality that they represent. 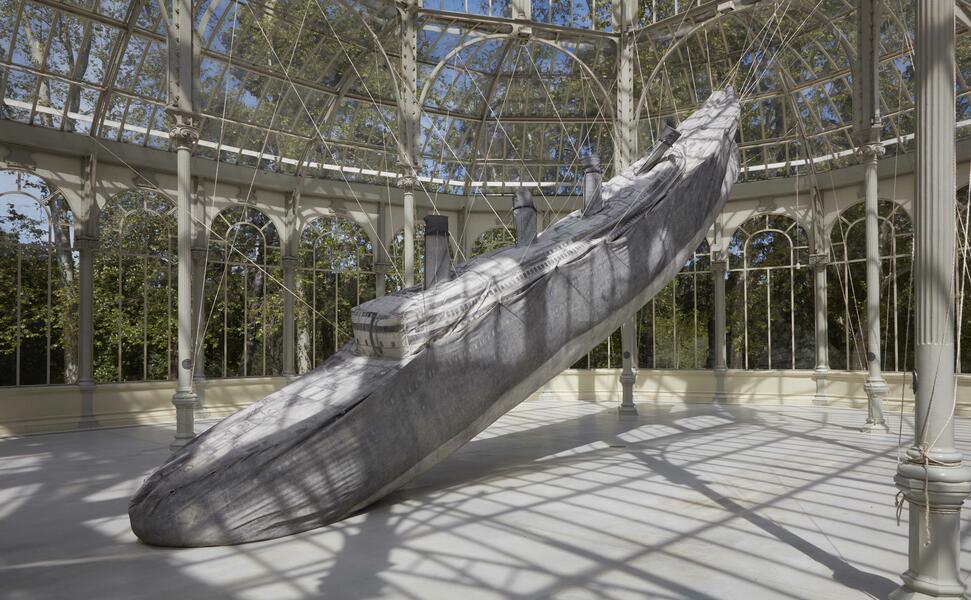 In his intervention at the Palacio de Cristal, Damián Ortega (Mexico City, Mexico, 1967) evidences his interest in social and economic criticism produced in recent decades. The work formulates various points of departure in a discourse that brings together constructive and confrontational processes. At stake is a reality that envisions history as a complex process and as the basis for an allegory of human decline, of the appalling urgency to accumulate, and of exaggerated and mass-scale development that soon fades.

To address these issues, Ortega makes use of three elements steeped in symbolism due to their nature as objects and to the temporality that they represent. Torre Latinoamericana [Latin American Tower] is named for the building in Mexico City designed by Augusto H. Álvarez that, soon after its construction in 1948, became an emblem of the modernist movement. Ortega made a leather replica of the tower, turned it upside down, filled it with sand, and hung it like a large pendulum from the center of the Palacio de Cristal’s dome. Because the piece is pushed intermittently, some of the sand spills onto the floor, registering the work’s movement. Key to understanding this piece is not only the contrast between the materials used in the original building and in Ortega’s version, but also the decline and eventual end of this architectural period.

The concept of decline is at play as well in the work Los pensamientos de Yamasaki [The Thoughts of Yamasaki], which attests to the artist’s vision of social confrontation, the ruin, and time. This is an installation with sculptural and graphic elements based on the Pruitt-Igoe housing project in Saint Louis, Missouri—one of the greatest social fiascos in the United States in the postwar period—and on research into its history. Pruitt-Igoe began to decline soon after it was built in the forties, a process that ended with the demolition of its thirty-three buildings. It is a paradigmatic case of the failure of modernist architecture. Regarding Pruitt-Igoe, theorist Charles Jencks speaks of the “surprising facet of modern life whereby social idealism leads so quickly to social catastrophe.” The dialogue between a fictitious narrative based on texts from research and the everyday objects from the era found in the building’s rubble inevitably leads us to delve into questions of temporality, fashion, obsolescence, and banality—all of which are concepts key to postmodernism.

The third element is Monumento [Monument], a thirteen-meter-long Titanic that hangs down from the ceiling; this soft Titanic is made of canvas (in another contrast of materialities) and decorated with wax pencil and plotter printer ink. The ship is frozen in its plunge into the abyss, a twofold sinking insofar as it goes beyond the physical and makes reference as well to the failure of an experiment that ended long before expected. In that, Monumento is exactly like the other works: it too recalls and pays tribute to decline and temporality.