In OdA (Art Offices) there is a repetition of sea views and a fragmented spider web. Dimensiones de lo mismo (Dimensions of the same), the second individual exhibition of Constanza Oxenford, explores, on the one hand, the presence of color in water and its reflective capacity to interpret emotional moods. On the other, although the web is also introduced into the shape and character of the water - all in the body of the dew -, there is an appreciation for the natural essence that is a return of the look towards the common objects of the photograph, now understood as a deobjectivization of the environment. 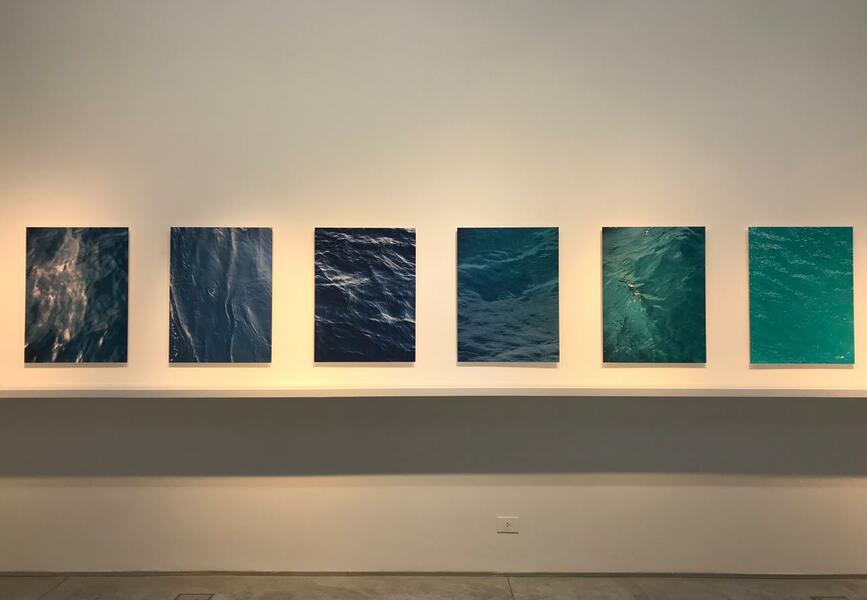 The owners of the space are the photographs displayed in the main hall of OdA. According to the artist, the Pantone Agua (Water Pantone) series emerged as an inquiry about color of water, material that is essentially colorless, but that adopted color by variables such as soil, sky and selective light absorption. However, the repetition of photographs in 60x80 flees to rational research and introduce the visitor to a kind of mirror room. Each one of the images, dissimilar in appearance and identical in essence - all correspondences to water in its natural state - can show the temperament and the dominant moods in our own self. "The emotion that awakens the water is the reflection of what the person who looks at it can feel," writes the artist. In this sense, the Pantone Agua series (and in the same way the Anárquica series, Estados de ánimo del agua and Hallazgos) offers a page to capture and visualize.

In the curatorial text, Alberto Goldenstein emphasizes Oxenford's procedures: "Constanza advances on the surfaces, colors, brightness and movements of large bodies of water to once again carry out its registration to the limit between the document and abstraction while preserving the possibility of recognizing the real and the origin of that image. Thus, the seas are seen as palettes of blue and cyan, or as rough surfaces assimilable to the skin of an animal or to the landscape of an uninhabited planet. " It is in these transformations of the natural photographed where the second characteristic of Dimensiones de lo mismo resides.

The artist, in addition to converging some of the main aspects of contemporary art - repetition, fragmentation, landscape and textures - in the production of her works, puts these same characteristics in dialogue with the others - we could say the abject, the excess and corroded by man. The absence of these characteristics in Oxenford's work alludes to that pristine state of nature, a source of knowledge that has been depleted in scientific-rational terms (remember that this project begins with a chromatic analysis) and that it can only and should be interpreted from now on more from a position of subject - no more object -, with its capacity of agency.

Dimensiones de lo mismo opened on August 7 and will remain at OdA Art Gallery (Paraná 759, CABA) until September 3rd. The exhibition can be visited from Monday to Friday from 3:00 p.m. to 7:00 p.m.

With a degree in Political Science and International Relations from the Universidad Católica Argentina (UCA) and a Master in Social Sciences from Columbia University, Cotty Oxenford was introduced to visual and plastic arts through practical workshops by artists such as Sofía Huidobro, Eduardo Estupia and Alberto Goldenstein. In addition, she has studied photography at the New School in New York and the Torcuato Di Tella University.

Her artwork have been presented at BAphoto and the Argentine Contemporary Art Fair, in addition to presenting two individual exhibitions at OdA Art Gallery –Synapsis, in 2018, and Dimensions of the same current show-. In November 2019 Synapsis project will be exhibited at the Argentine embassy in Washington (EEUU).