During yesterday afternoon at Quimera Gallery, located in Güemes 4474 (Buenos Aires), Eric Markowski appropriates the gallery space with a can of meat monument. Like a great alphabet soup, the exhibition curated by Sebastián Vidal Mackinson seeks to reconstruct history and understand citizen construction processes that materialize history. 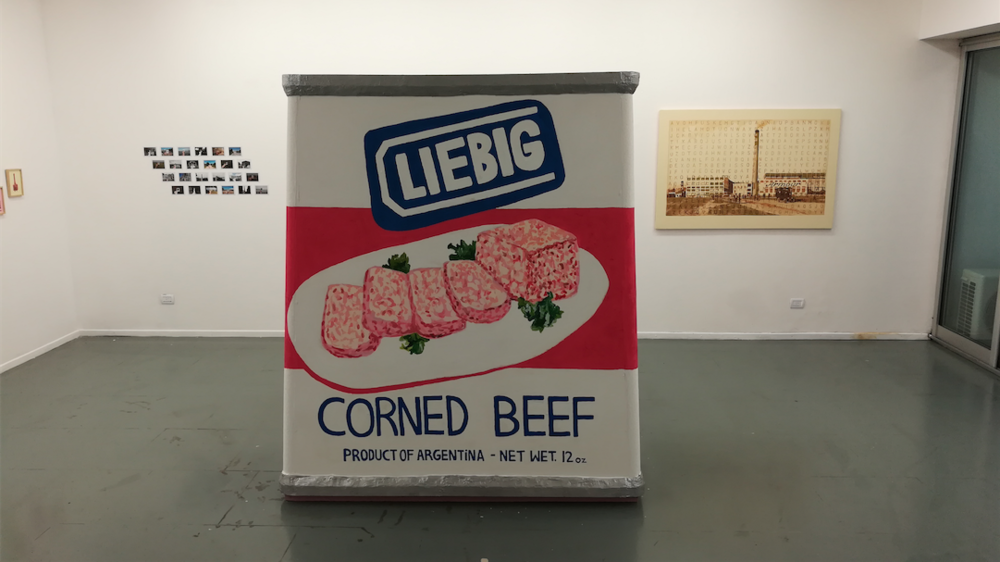 With a huge Liebig meat can in the centre of the gallery, Markowski appropriates the monument located in Liebig town, in the province of Entre Ríos (Argentina). "These cans," explains the artist, "were produced by English companies based in Argentina, and then distributed throughout Europe." At that time the Second World War was passing: the cans were sent mainly to soldiers.

But these foods reached even more remote places. Such was the case of Markowski's grandfather, who in exile in Africa due to the Soviet invasion of Poland received the cans from the English.

After the war, the artist's grandfather decided to immigrate to Argentina. Europe was devastated and emigration was promoted: the destinations to choose were Australia, Canada and Argentina. In the can it said "Industria Argentina", that suggested in the unconscious of many Europeans that there was work and progress there.

"The work proposes thinking about contemporary art within the process of citizen construction, and how oral heritage - Eric knew the cans Liebig for the story that his parents told him about his grandparents – is a cause of material heritage", argues Markowski. Hence, the exhibition bears his name, Diáspora (Diaspora).

On the one hand, the exhibition is made up of paintings that intend to reinterpret the industrial landscapes of the interior of Argentina and Uruguay. In turn, each image is superimposed under an alphabet soup in which you can find the location of each industry. All representations have been taken from archival images. However, submerged in gaudy and languid colors, Markowski's paintings allude to the material aspects of history, but distancing themselves from the merely documentary (that is, from the black and white of the archive photograph).

On the other hand, a photograph series dialogues with the paintings and with the great monument that is the central axis of the artwork. Diáspora, says the artist, submits the story to "three on scriptures: the word, represented in the alphabet soup; the drawing, as a creative technique of images; And photography."

But the use of photography in Markowski's work also has other meanings.

Bachelor of Painting at the University of La Plata, the Argentine artist discovered during his training that the problems addressed by photography –because of its realistic nature- were of greater interest to him than those undertaken by painting where the viewer has the budget of that what he observe is a representation of something. "In a photograph someone can believe that what he sees happened," he explains, adding: "Later I understood that it is not necessary for me to think in the medium, but in an image. Then I look for a way to address it."

In addition, the use of this medium arises from practical purposes. During fieldwork and research, Eric photographed the different industrial plants and then took those photographs to painting or drawing. "When I go back to studio I change my way of working. I become more methodical, I select the photographs and I start painting. The beauty of painting is the long time condition, the bad thing about photography is that it happens too fast."

Finally, Diaspora assumes political importance. Although the point of departure is the artist's family history, these industrial landscapes are part of Argentine political history. During the war, Europeans - mainly English - made large investments in the Argentine soil to export all kinds of food to Europe. After the war, those businessmen made their suitcases and returned to their homes, abandoning immense structures and a hundred workers. All this, without going any further, coincides with October 17, 1945 when the Argentine trade union groups took to the streets to ask for the release of Juan Domingo Perón.