Entering Delia Cancela. Reina de corazones (Delia Cancela. Queen of hearts), exhibition curated by Carla Barbero at the Museum of Modern Art in Buenos Aires, we are greeted by a painting with curved contours. Inward, large planes of primary colors oppress a face with absorbed eyes; outward, those planes push against the edges like a cloud in the instant before losing its contour. In Mujer y nubes (Woman and Clouds), of 1965, the formal synthesis of a pin-up figure and the effects of reverie annotated, with stereotypical signs, by a camp consciousness converge. The piece realized in co-authorship with Pablo Mesejean was, perhaps, chosen for the position it occupies by knotting three tenacious lines in Cancela’s production: visual mass culture, representations of femininity and visualized fantasy as an expanding force. 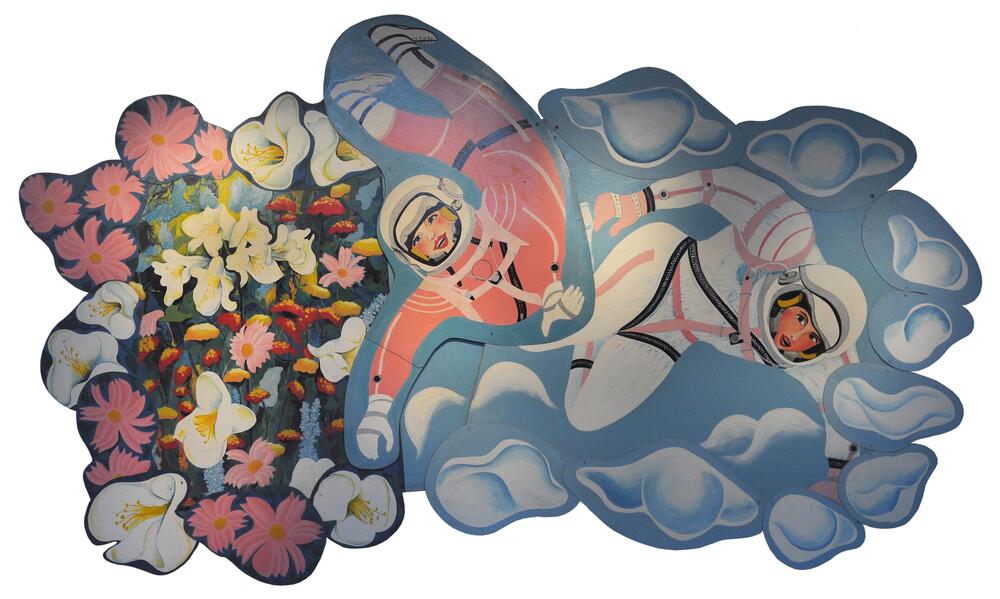 Everything we see in this sample is dragged by that force towards the weightless place of a rêverie. Not only the astronauts that float within Love and life, historical reconstruction of the installation presented in 1965 in Lirolay Gallery or Sonny and Cher, scene of bucolic relaxation that climbs a cloud to get away from pedestrian concerns. The series of figurines in their variation on the same motif are expansive and they are for their recourse to the first support at hand the drawings that make up the Retratos de mujeres (Women Portraits)installation. In each image there is a fantastic power that expands the space by breaking the shapes that hold it. Fantasy understood in its classic meaning of apparent image: the set of paintings from the sixties that refer to the advertising poster by format and technique, commenting on the phantasmagorical reality of the merchandise. Fantasy, for that very reason, as an imaginative inscription about memory: less a denunciation of the mass media than its remembrance as a mental image. But above all in the romantic meaning that opposes the fantastic production to the ratio, the calculating mentality. Hence the impulse that throws things against the foreseeable: in the coloring of the sketches, in a group of books wrapped in cloth and deprived of their function.

Delia Cancela usually remembers that her works are intertwined with an unbreakable continuity, the same that integrates them into everyday life. This continuum transforms each piece into the partial crystallization of a single work, the real one, which unfolds enveloping everything with a vital gesture. That is why she does not distinguish between art and design: the sketch has the status of a work, while the work is also a project that awaits its actualization of life. And what goes through design to arrive at art is not the totalizing gesture of the compositions, but the power to connect vital regions. There are no great gestures that refer to the administration of space or the material configuration of an idea that begins and ends. It is a work that does anything but insist on its own borders: it composes planes of existence by proliferating details-we see it in his drawings of a Victorian romanticism-, by madness of darning, line or color.

The image of work that Delia Cancela promotes resonates with the program that the first romantics called progressive universal poetry, a movement that summons in its reflective march all genres and languages; that stops at the limits of the form only to unfold them and return them to the infinite folds of everyday life. The audacity of that conception is observed in a special way in the productions of the last decades: collections of drawings that do not show the evidence of a corpus but emerge as the sum of faint gestures. In this production Cancela shows us a way of alternative utopia to the emphatic expressions of the sixties, but no less radical. At the threshold of what is perceptible, she summons the light practice of a trade that goes on composing always prolonged series of imagination.