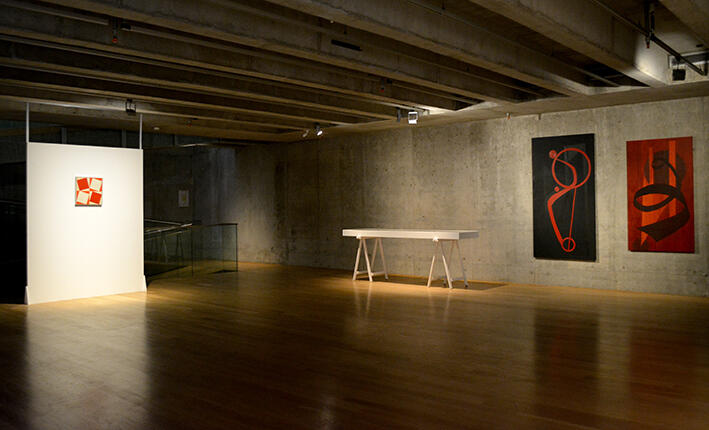 On MACBA’s ground floor, we find works by Magdalena Jitrik (1966) and Leila Tschopp (1978) produced after the year 2000, as well as a painting from the sixties, Pintura múltiple [Multiple Painting] by Germaine Derbecq (1969), that forms part of the museum’s permanent collection. The stylistic continuity between Pintura múltiple and Leila Tschopp’s woodcut Cruz negra / Cruz Roja [Black Cross / Red Cross] (2006) placed in front of it is as visible as it is disruptive. The only element that ruptures the isotopy—that is, sameness in place and in time—is the yellowish hue that, with the passing years, has altered the areas of the canvas Derbecq chose to leave blank. That blemish highlights the past like a fault line on the historic ground of painting. And it provides a hypothesis to begin to contemplate this show, which revolves around the tactical and never fully enacted identification of the animal that mimics its prey in order to then devour it. Exhibition as ensnarement.

Past avant-gardes constitute a repertoire of figures to be selected at will by contemporary artistic practices as they delve into the surface of the present. But that has not been how museums usually make use of “historical” avant-gardes. Canonical art history was a numbing lullaby sung to drown out the political potential of the avant-gardes. The inclusion of Derbecq’s work—the only one from the MACBA collection featured in the exhibition—is the evidence that enables us to conceive that a political operation is at stake in Jitrik and in Tschopp: to contaminate the visuality of their own images with images of what is called the historical avant-gardes in order to demonstrate how those avant-gardes have been ensnared by legitimating discourses. An image-curse whose act of dismantling does not make use of images but of disciplinary discourses and their systematic omissions. It is a question, in a sense, of rewriting history, of undressing the images that the dead painted by painting them over.

The ground floor, then, houses the coexistence of heterogeneous beings that, in their throbbing, knock into one another. A display case brings together books by the revolutionary Segre, a copy of the newspaper Solidaridad obrera, registers and sketches of works, and records of the media and of art—ashes of the fire that, ultimately, all archives are. Something of the order of the remain makesitself felt in Tschopp’s work in acrylic installed across from the case, its charred and black tones overlapping in hard-to-read opaque forms. On the museum’s first underground level, Caballo de Troya rewrites painting through set design and synesthesia that insinuates industrial materiality. In América, on the second underground level, painting is explored through faceness and the past’s imprint on materials.