Atelier Morales ventures a new beauty that, albeit with tension and ambiguity, appeals to the viewer’s senses and feelings. 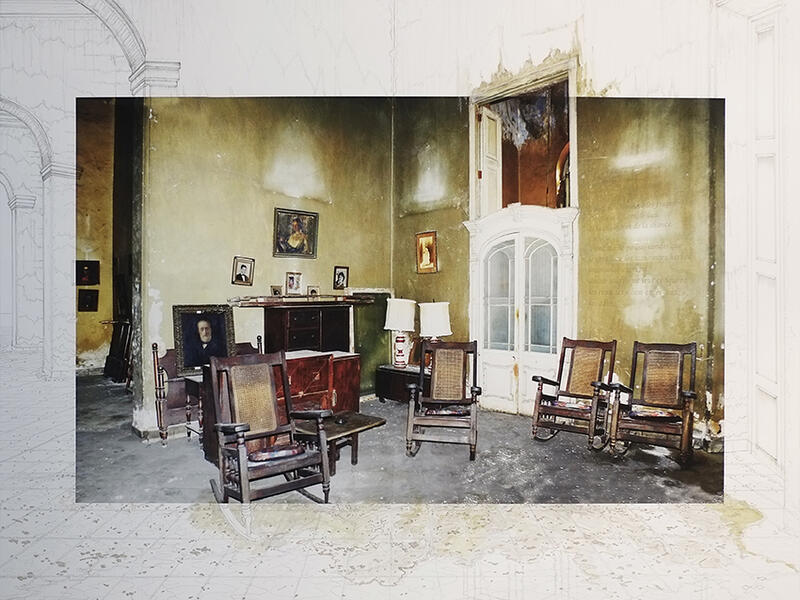 For a number of years, Atelier Morales (Teresa Ayuso, 1961, Havana, Cuba and Juan Luis Morales, 1960, Havana, Cuba) have investigated the urban environment and how it is altered as it registers the passage of time. "Arqueología III," the third project in the “Arqueología” series inspired by the poem by Cuban writer Eliseo Diego, is on exhibit at the Nathalie Obadia gallery in Paris. The show presents mixed media works in photography, drawing, and watercolor depicting architectures in Havana that tacitly narrate the life that has disappeared there.

Drawn by the history of homes that have been abandoned by their families, Atelier Morales acts as an archeologist of these times. For some fifty-five years, Cuba has witnessed the constant emigration of families. The "Arqueología III" series shows how years of neglect have led to the decay of that family patrimony to the point of its disappearance altogether. The series silently speaks of the human absence that leaves traces in everyday objects and constructs a family memory. In that exploration, the artists capture images that evidence the passage of the invisible and of the impalpable and the fate that comes in its wake. “Arqueología III” is a reflection on family, society’s principle patrimony.

Silence is always present in photography. In “Arqueología III,” that silence is so striking that it is inevitably perceived. Photographs of ruins that are almost sculptural, where solemn objects and figures shrouded in silence render the real space a dreamlike site of ghostly projections, tangible elements in an urban exploration. The works exude an exasperating mystery. Before the work, viewers find that they must look closely in order to discover the fragments of the Eliseo Diego poem, which are not easy to make out, and archeologists who excavate in an attempt to unearth the history of these families in order to explain how they have gone missing. Beyond the sheer beauty of the image, a brief but substantial dislocation makes itself felt as that which has been hidden also insinuates that it can be spied on.

In the contemporary world, artists rarely use photography as a means to produce an image; what they do, rather, is use the image as an instance in which to deconstruct photographic language. Atelier Morales ventures a new beauty that, albeit with tension and ambiguity, appeals to the viewer’s senses and feelings. It wagers on sensibility (aisthēsis) as means to transform and to question how we perceive and inhabit the reality and images around us.

Through this refined photographic work, Atelier Morales constructs transcendent spaces that concede architecture a place to simply exist and, by extension, that provide the means to feel deeply the relationship between architecture and the world. Thanks to this careful research, Atelier Morales has efficaciously tackled projects laden with cultural associations and nourished by extreme formal delicacy.

Atelier Morales’s archeological analysis is based on careful observation of the stillness of objects and of archives. It constructs series where the objects are linked by function, trace, or form. Yet, the artists in the duo do not merely dwell on the formal qualities of those objects but, rather, heed their ability to reveal social, political, and economic issues, evidencing the position of things, of language, and of discourses. They attempt to trace distant survivals rather than to undertake a nostalgic exploration. To that end, they make use not only of photography—instrument that sets and detains but also splinters and constructs an alternative narrative of reality—but also of graphite and gouache, which they employ intelligent and delicately. Thus, Atelier Morales individualizes and manipulates the architectonic space it transcends, constructing a new urban image and composing postmodern frescoes.