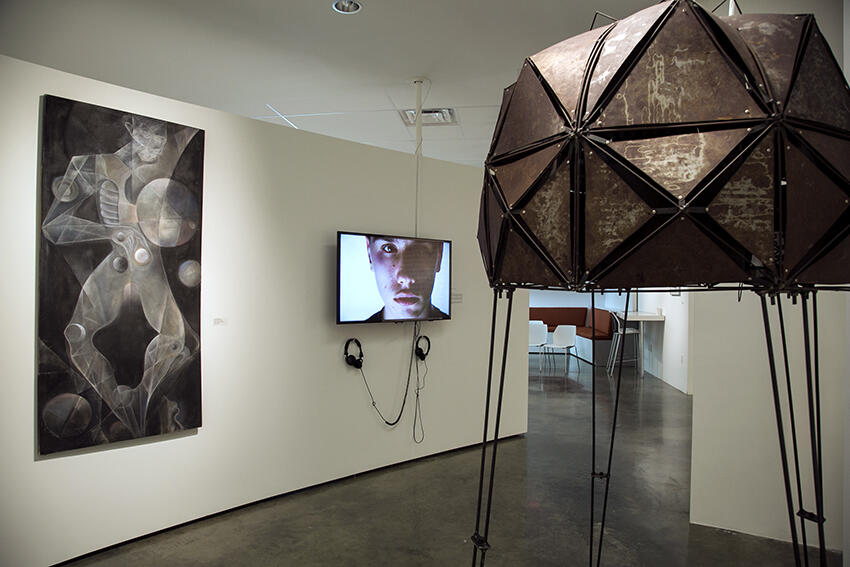 The title of the exhibition is taken from the pioneer Juan Downey's “The Looking Glass” (1940-1993) for both the conceptual implications that the curator and museum director Jack Rasmussen points out in the catalog - his "use of the mirror as a metaphor for understanding identity "- as well as the fact that he lived in Washington for some years since 1965, just before beginning the seminal video series he recorded from experiences of territorial and cultural mobility. Certainly, the initiative that takes place in the museum opens a necessary space for immigrant artists in Washington including works by both deceased and contemporary artists. A constructivist sculpture by José Ignacio Bermúdez (1922-1998) bears witness to the passage through the city by of one of the members of the Group of Eleven in Cuba, where the Revolution altered the course of the development of abstraction. Like Downey, Joan Belmar was born in Chile. His abstract installation with plastic glasses and mylar forms a semicircular zone as a territory where perceptions of transparency and opacity vary with light: the viewer sees imprecise traces, forms as unstable and subjective maps. The exhibition includes work by Naúl Ojeda (1939-2002) who emigrated from Uruguay amid the political repression of the 70's, and after a trip, spent 30 years in Washington. His work combines the tradition of Latin American social and humorous engraving with the vigor of expressionism. There is also humor in the work of the Miami born Ric Garcia, who appropriates the New York pop culture, to recover food and Latin products, elevating the canning of the brand "Goya" to the category of the Warhol’s “Campbell.” The humor in the multi-media work of Lenny Campello -dealer, blogger, curator and author of the book 100 artists of Washington D.C. - is political and biographical: it mixes textual and graphic resources to address Ché Guevara as emblem of dystopia. The irony in the Colombian Carolina Mayorga consists of an operation that doubles through the performance the roles of servitude assigned to the immigrants, but when transforming them into art, precisely disarticulates them. In Irene Clouthier (Mexico) the sense of playfullness prevails. Her floating sculptures on paper fulfill the condition of Calvin's lightness and look at the history of abstract art in a playful and light manner. Frida Larios (El Salvador) intervenes the space with graphs that are part of her research project and book New Mayan Language, in which the hierograms reside, proposing a playful system of signs that defies cultural hegemonies. Muriel Hasbun's poignant installation is made up of three pieces: the Scheherazade video that evokes the multiple exodus stories of her ancestors, marked by various wars, and her own, as an immigrant from El Salvador in 1979 during the Civil War, a painting of Julio Sequeira, and an apparatus created for the exchange of narratives: "This Scheherazade", she states, "affirms the power of personal and cultural narratives in the construction of identity."