"Imago Mundi" is the first individual in Galería 80m2, Lima of the Argentine artist Adriana Bustos, who takes her title from the cosmographic treatise of the geographer and theologian Pierre d'Ailly, which Columbus used on his voyage of discovery. 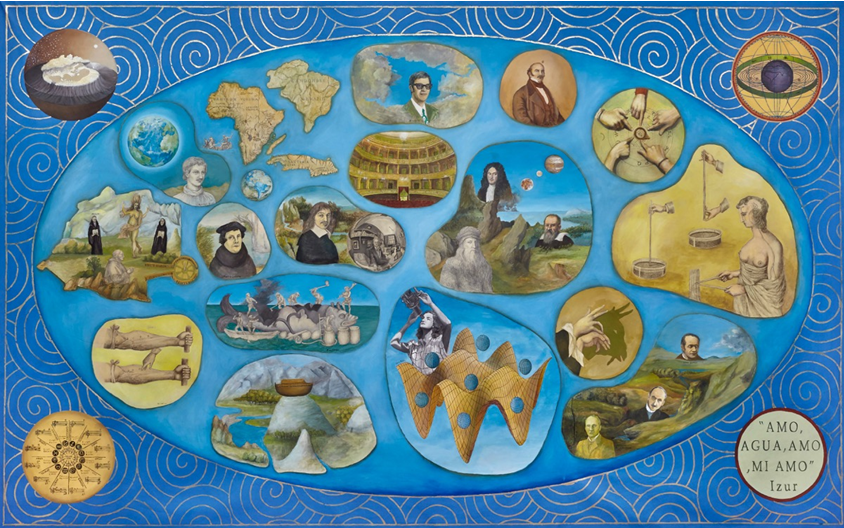 The four assembled canvases present abstract design patterns that cover the entire fabric as a backdrop. On this there is a central element and other satellites, distributed symmetrically around the painting, which serve as a background for seemingly unconnected figures, but which invite us to elucidate their meaning.

In "Imago Mundi I. Tourist Map" (2014), on a pattern of copper-colored circular shapes on a purple background, we see diverse drawings: a 100-franc chip from the Monte Carlo casino, Alexander Humboldt, the battleship Maine, Enrico Caruso, the entrance to the Fuerte de la Cabaña, a plaque of the Hotel Perla de Cuba, the copper molecule, advertising of Pan American Airways, the logo of the Cubanacan Grupo hotel company, to name a few.

The location and similarity of the figures claims to discover their possible links: Pan Am was founded as a postal service that operated between Key West, Florida and Havana. The 100 francs card was coined to commemorate the 100th anniversary of Monte Carlo, the name by which it was compared to the National Casino of Cuba, "the Monte Carlo of America". Enrico Caruso sang in Havana in 1920 at that time an astronomical sum of 10,000 dollars. At the Hotel Perla de Cuba, in Sancti Spíritus, Fulgencio Batista stayed in the 50s and the Fort de la Cabaña was occupied militarily by Che Guevara when the revolution triumphed. That same fort was built by Spain in the s. XVIII. Alexander Humboldt was in Cuba between 1800 - 1801, the battleship Maine was sunk in 1898 during the Spanish-American War, copper was a key product that extracted Spain from Cuba with slave labor. The images of Bustos operate as keys that allow the processes of independence, tourism, politics, culture, economy, commerce and leisure to be intertwined.

Although the detail invites us to focus individually on the figures, the painting also claims its character of visual totality via the design pattern and its symmetrical compositional structure. Although we ignore the historical information contained in the figures in isolation, the images peer into a series of complex relationships between them, which we must trace.

Adriana Bustos rushes us into a reflexive process suited to her peculiar cartographic undertaking: sketch the map of communicating vessels between geography, science, politics, history, economy and commerce. We undertake with it a kind of journey of discovery that takes us back to the real and potential relationships that make up the world; relationships that we should not only discover, but also imagine.