Cruzvillegas turns this exercise at Turbine Hall into a unique opportunity to bring a number of his interests together in a single action. 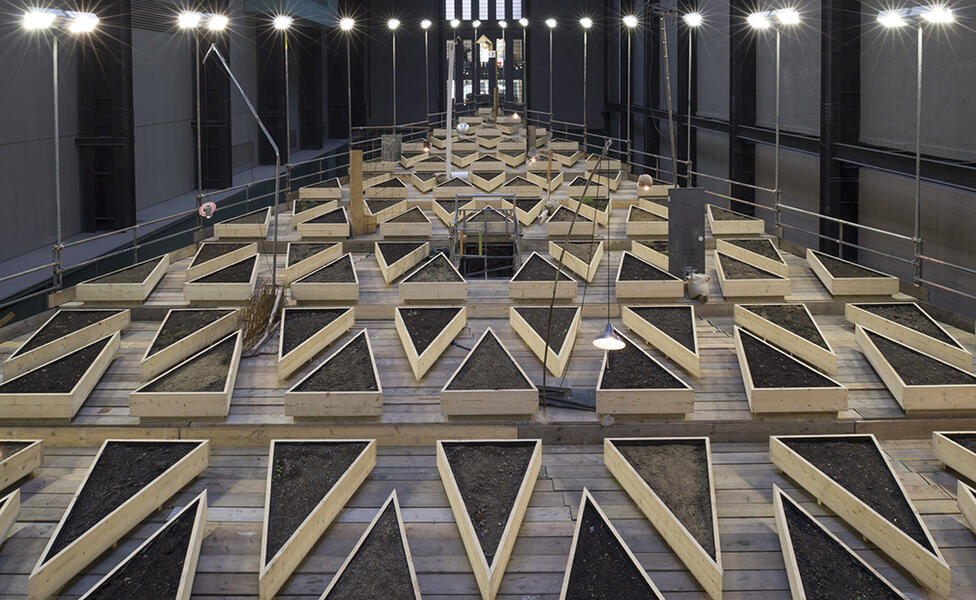 Already known for Doris Salcedo’s celebrated 2007 intervention Shibboleth, the Tate Modern’s Turbine Hall has opened its Artist Commissions Program in alliance with a well-known South Korean car manufacturer. Beyond questions of mercantilism, the fact that the London museum remains committed to interventions and site-specific works is evidenced by the program’s first action, a work by Abraham Cruzvillegas (Mexico City, 1968).

Since the nineties, Cruzvillegas has been considered a key figure in the Mexican art scene; he turns this exercise at Turbine Hall into a unique opportunity to bring a number of his interests together in a single action. The creation of sculptural elements with a certain architectonic feel forms the basis of Empty Lot. An enormous pattern of pieces of wood, this work materializes a number of concerns—from self-constructions to activism through Liz Christy’s “guerrilla gardening”—at the center of the Mexican artist’s production.

The wooden triangle is the unit that structures an intervention based on a theory of informal urbanism more oriented to the conceptual facet of creation and change than to the merely formal. Despite an appearance reminiscent of Suprematism and suggestive of an interest in basic geometric shapes, this irregular construction subject to constant modification, demolition, and expansion holds seeds—the real leading players in conceptual change, a longstanding interest of Cruzvillegas. Here, that concern is bound to the organic in informal urbanization as well as a number of the artist’s other enduring interests, among them agriculture. As such, the work furthers a discourse that Cruzvillegas has been developing for years.