The reasoned catalog of the Coloritmos by Alejandro Otero is published in Caracas, a volume with more than three hundred pages that delves for the first time into a chapter little studied and of great value for the Venezuelan and Latin American art of the XX century.

Alejandro Otero’s (El Manteco, Venezuela, 1921 - Caracas, 1990) trajectory was marked by a spiritual force defined in one of his last writings as the desire to "be punctual", a phrase that coincides with another one from his beginnings as an artist: aspire to "be at the height of time". This concern for the social time that surrounds the man and the creator made him assume his work as a response to the demands implied by the path to progress in his country. In this process, Otero’s artwork aspired to present itself as an indicator, among others of equal value, of the direction that Venezuelan art should follow in its modern search, from the promotion of abstract languages ​​and the attack on the institutional mid-forties system of art; the introduction of constructivism and alliances with architecture in the fifties; and already in the sixties, the cult of science and technology as a way to consolidate the social commitment of his work and the justification of his presence in the public space. 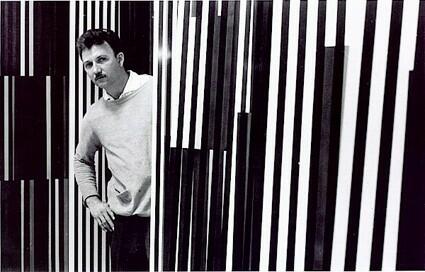 This changing quality is closely linked to the transformation that Venezuela underwent since the end of the Gomecist dictatorship until it reached democratic stability, in an urban and social modernization that was driven by oil exploitation throughout the second half of the twentieth century. From this point of view, it is possible to understand the diversity of Otero's production in terms of themes, languages, techniques and media. And also from there one could glimpse the solution of flying its last stage through computers, cutting-edge technology and one, sometimes, utopian realization, in what by way of a "greeting to the 21st century" allowed him to insert his work in a kind of timeless canon.

From this fertile and extensive trajectory, the chapter dedicated to the Coloritmos –elongated planks, crossed from one side to another by parallel bands white and dark in whose interstices were distributed geometric shapes of pure and brilliant colors- protrudes. With similar words Alejandro Otero defined these paintings that raised a radical reinterpretation of the legacy of European geometric abstraction from the chromatic perspective and dynamics of the American tropic. Its appearance in the mid-fifties caused surprise in Venezuela’s artistic circles and its impact soon spread to other countries in the region. Despite this success, specialists and followers of Otero lacked a firmer documentary support about the origin, evolution and scope of these unusual paintings. "How many works were actually produced by Alejandro Otero as part of the Coloritmos series? How were they identified? What brings them together, what sets them apart? How were the Coloritmos varying in time? What was the fate of the works? "

These questions are taken from Los Coloritmos de Alejandro Otero. Catálogo razonado (The Coloritmos by Alejandro Otero. Rationed catalog) book that has just been published in Caracas, and were what motivated the research that its authors, Juan Ignacio Parra S. and Rafael Romero D., started two decades ago. The answers to those questions are now poured into this magnificently edited volume that contains the first in-depth study dedicated to this pictorial series. The authors set out to register all the Coloritmos, organize them according to the numbering assigned by the artist and present them according to the requirements of a reasoned catalog. The book contains an essay by the curator and file conservation specialist Lourdes Blanco, a full report of the research by Rafael Romero D. and a study on the Coloritmos signed by Juan Ignacio Parra S, where he develops an original classification proposal. The volume is completed with a photographic appendix of the Coloritmos sketches, the biography of the artist, a list of exhibitions where these works have participated and the bibliography consulted. Aixa Díaz has been in charge of the sober design and the careful impression is by Javier Aizpurua of ExLibris.

The book gathers many interesting data. The first of them has to do with the universe of pieces known to exist, a figure formalized by Otero himself in seventy-five Coloritmos conceived between 1955 and 1960. Parra’s and Romero’s record now place that sum in ninety: eighty-three Coloritmos, six Coloritmos in movement and a replica authorized by the artist, all executed between 1955 and 1990. From this group it was not possible to locate until the closing of the edition five works that are known of their realization through documents. Nor has it been possible to verify the existence of another twelve that presumably never came to be executed. Another valuable contribution refers to the origins of the series and the immediate acquisition, in 1956, of the first copy by the Museum of Modern Art in New York (MoMA). In the same way, a complete description of the execution process of Coloritmo is offered, accompanied by an unpublished photographic sequence taken by Sara Guardia de Mendoza.

Other attributes of the book include the explanation of Coloritmo 35 fate, the first abstract work to receive the National Painting Prize at the Venezuelan Official Salon of Art in 1958, whose whereabouts were unknown to many, including the author himself. Also, of great importance, the section referring to the measures necessary to conserve these boards, on which the debate is hovering between those who propose to preserve the pristine appearance of when they were created sixty years ago and those who are inclined to guarantee the aging worthy of the materials of the time. But undoubtedly the unique contribution of this book, in addition to the valuable catalog that sustains it, is the classification proposal of the series that allows identifying up to fourteen creative aspects through which the visual reflection of Alejandro Otero passed. This model proposed by Juan Ignacio Parra S. will be referential for future inquiries about the Coloritmos.

A crucial element in this project has been the research effort that sustains it, typical of a reasoned catalog but rare in the bibliography on art published in Venezuela, more prone to intuitions and speculations, when not repetitions, than to the search for the documentary evidence that serves as support. Around this theme and its role in the history of art is the relevant essay by Lourdes Blanco, which serves as a prelude to the book.

Alejandro Otero’s presence in the set of the main figures of twentieth-century Venezuelan art is based on a significant and influential practice as a painter, sculptor and engraver, as well as texts that are a reference in thinking about Venezuelan and Latin American Art. Coming from a porr home, born in a town almost lost in the intricate south of Venezuela known as El Manteco. It was the year 1921, and the country was immersed in the marasmus of forgetfulness and backwardness that the Gomecist dictatorship left throughout the territory. When concluding his basic education, he started art studies in Caracas, where on a previous trip he had already been seduced by the limited but stimulating cultural scene of the capital. In 1945, after completing his training, he obtained a scholarship from the French government for a stay in Paris, a city in which he lived for several stays that lasted until 1964. From this year he developed an outstanding work as a cultural manager in Venezuela and a valuable public work in different parts of the world. Consecrated as a central figure of twentieth-century Latin American art, he died in Caracas in 1990. The impact of this overwhelming career is evident in the numerous exhibitions he made in various parts of the world and his incorporation into such important collections as the MoMA, in addition to other awards and recognitions achieved: the museum that bears his name in Caracas or the meeting of his production written in publications such as Alejandro Otero. Critical memory This record and the issues he dealt with place him in a field of admiration that he shares with his compatriots Jesus Soto, Carlos Cruz-Diez or Gego, something that accounts for the interest that his work continues to arouse among curators and national and foreign researchers.