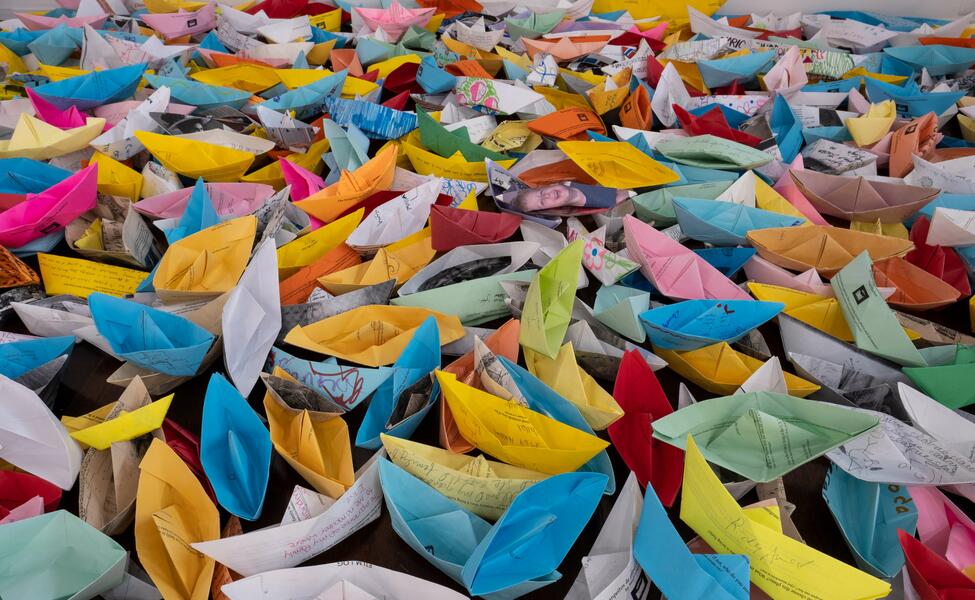 The immigration crisis has been somewhat overshadowed recently by the global pandemic.  Nevertheless, people living in untenable circumstances of poverty, lack of opportunity and violence, particularly in Mexico and Central America, continue to come to the United States looking for relief from these conditions.  For some, the immigration experience is successful, although it may take many years.  For others it is an ongoing trial of hiding, fear of deportation and continued poverty.  Many, or even most immigrants from all parts of the world tend to live in neighborhoods with others like them, developing “parallel” worlds in which they continue to speak their native languages, and deal only with people in the community.  These factors affect assimilation and enforce the separateness of identity which keeps them from success in the wider society, while at the same time they struggle for inclusion.

The concept of acceptance, or more precisely “to accept” these facts and continue to live this dichotomy of separateness and inclusion is the theme Lindsay Yancich proposed to Irene Clouthier Carillo as the basis for an exhibition now on view at the Joan Hisaoka Healing Arts Gallery at the Smith Center.  The latter, a native of Mexico but in this area for approximately twenty years, asked seven artists to participate with her in exhibiting works that expressed the problem of acceptance of the immigrant dilemma.  While all of the works in the show do not evidently achieve this goal, it is worth considering those that do suggest that teetering between two worlds, and acceptance of that ambivalent condition.

Fabiola Alvarez Yurcisin is a native of Mexico, but has also been in the United States for some time.  In a statement on her website, the artist expresses her awareness of the dilemma referenced above: “My work lives between my intuitive home of Mexico and my rational home of the United States”

This consciousness of continuing to live between two worlds, and how it is at the core of her art practice is evident in her work in this exhibit.  In Rolodex: When Does it Stop? (2016) Three objects are grouped on a white shelf in a clear plastic box.  One of them is a hamster exercise wheel made by the artist using audio cassette tape woven in a cage structure so that it looks like sculpted stones shining on the surface.  The implied metaphor of the hamster running on the wheel on a journey that will never stop is fairly clear.  An antique steel Rolodex case, painted black, has been fitted with cards typed in Braille with words that are synonymous with the words “power” and “hope.” The intent here is to highlight how these two concepts function in the lives of immigrants.  The artist’s use of Braille here refers to her mother’s experience with losing her eyesight, which entailed learning yet another new language (Braille) while desperately dealing with the medical profession in this country.  Again, we have a sense of being caught in between, and recognition of, as Yurcisin has stated, “the complexity of accepting the immigration process” and what that signifies on a more universal scale.

In my conversation with Clouthier at the gallery, I asked the curator what the word “aceptar” meant to her.  In answering she spoke of being in this country for twenty years, and still feeling like an immigrant.  When she said it, she looked at me as though saying “isn’t that terrible?” but at the same time, “I haven’t lost my Mexican identity.”  The desire for inclusion, to be accepted, is there, but fights with the tenacity of one’s first homeland.  Clouthier’s group of small drawings, Everyday Objects, represent ordinary objects that refer to her acceptance of this duality as well as connoting the colorful character of Mexican folk art.

Gerardo Camargo’s You Can’t Be Hungry in the Land of the Free (2018) is an interesting take on the theme.  The work is comprised of a columnar pedestal, apparently of green marble.  But it is faux marble. Above this is a complex tower of used aluminum food trays, stacked in a way that makes you think of garbage areas around restaurants.   The column speaks of our historical European culture, perhaps more than the artist realized in that the technique of creating marmo finto was first extensively used by the ancient Romans.  The trays speak of another world all together.  They hold the remains of “Latin food (Salvadoran pupusas, Peruvian chicken, Mexican tacos, Guatemalan tamales).”[1] With regard to the column, there is something interesting about the fact that the artist refers to the food as “Latin”, the language of the ancient Romans.  To my mind, this only amplifies the dichotomies, which are very real.  The ironic title projects images of the current poverty, malnutrition and hunger of so many Latinx immigrants across this country, while at the same time pointing to the fact that these native comfort foods are available here in abundance.

Two other compelling works in the show, from this point of view, are Wilfredo Valladares’ wall installation titled Unmasked and Muriel Hasbun’s Barquitos de papel/Collective Archive. Both works deal with memory and how that memory informs the present, particularly with regard to the immigration experience.

Valladares is a native of Honduras. His Unmasked is a wall installation consisting of a series of 27 wooden rolling pins that have been carved with symbols and designs and charred black, with a good deal of variation among them.  These are arranged vertically and horizontally around a cast iron pan with a relief of a woman’s face. This woman must be Valladares’ mother whom the artist credits for guiding him to an appreciation of design, architecture and art making.[2]  Growing up in this beautiful but troubled Central American country, Valladares was made aware of his “ancestral Mayan traditions and culture.”[3]  Having been in this country for thirty years now, Valladares writes:

“To be able to endure the life of an immigrant one must hold on to their memories.  My body immigrated to the United States, but my mind was still in Honduras.  It has been this duality and tension that [has] informed my art concepts…”[4]

This work is an elegant presentation of how memory informs Valladares’ artistic practice.  He employs Mayan symbolism to refer to the history of his people who, he says, are not extinct, but very much present in the Honduran population.  Their presence is reflected in Mesoamerican traditions, languages, art, architecture and cuisine. Native cuisine, connoted by the carved rolling pins and the pan, is something that connects him to personal memories of his past, as well as being an inspiration for his art today.

Muriel Hasbun was raised in El Salvador by parents (particularly her mother) who also guided her to appreciate art and eventually to become an artist photographer.  While she has been in the United States for some time, her connections to El Salvador remain very active.  These serve to stimulate works that source personal memories of her family and the country as it once was.  Barquitos de Papel is an ongoing and interactive project that is intended to encourage others to express their own stories and memories.  They do this by making little paper boats (barquitos) from copies of family documents and photographs, many of which document their immigration experience.  Hasbun, who is of a mixed French-Jewish and Palestinian-Christian background, was first the daughter of immigrants to El Salvador.  Her appreciation of that history is universal, pointing out that we are all immigrants or the children of immigrants.  Her aim is for viewers to “engage in self-reflection and personal discovery, and to accept each other through and with our differences…We claim our individual story in and with the community, and together we write our collective history”.[5]  A video and photographs of boats already in the Archive accompany a growing pile of barquitos on the gallery floor.  As sea voyages on boats were, for a long time, a common means of immigration to this country from all over the world, they are a symbol of that communality.

Open by appointment. Call 202-483-8600, or lindsey@smithcenter.org for more information about viewing hours.

[2] This installation is part of a much larger series of works comprising the artist’s series titled Unmasked. A portion of these were exhibited together at the American Poetry Museum, Washington DC in 2015. The larger series contains numerous portrait heads, and the whole is dedicated to the artist’s mother. https://wilfredovalladares.com/unmasked

[3] Artist’s statement to this exhibition.

[5] Artist’s statement to this exhibition.  Emphasis is mine.