From October 1 to December 20, the Buenos Aires-based artist’s first solo exhibition in the UK moves away from representation, instead creating sensorial experiences with the potential to induce a radical transformation of the self and others. 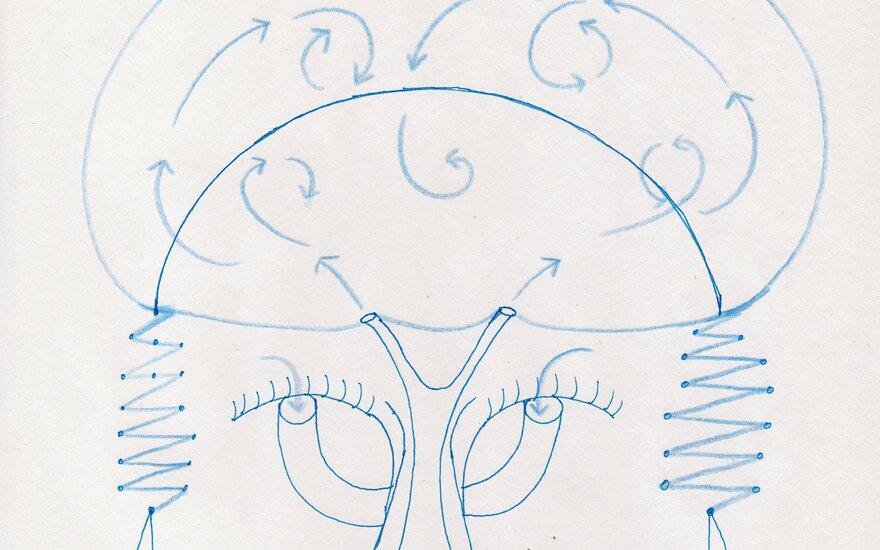 In recent years, Navarro has sought to adopt the slow metabolism of a reptile, experimented with ways of embodying the physical properties of light, and invited a large group of people to animate a giant mechanical octopus, in order for them to become part of its decentralised nervous system.

Originally scheduled for April 2020, Navarro’s plans for the exhibition at Gasworks had consisted of transforming the gallery’s architecture into a living, breathing organism: a large-scale artificial lung that would inhale and exhale air from the street. Conceived months before the COVID-19 outbreak, this immersive installation was designed for visitors to sync their body’s most vital functions with one another, offering a space for collective meditation and oceanic breathing.

As the exhibition was postponed indefinitely due to the pandemic, Navarro started drawing daily during the lockdown in Buenos Aires. In his words, this practice enabled him to "relocate the studio to inside my own head," revealing the act of drawing as a timely medium for speculative thinking. Produced in self-isolation, the hundreds of sketches that result from this experience act as a portal connecting dimensions, past and future visions, unrealised and perhaps unrealisable ideas.

Inspired by the insights of quantum physics, according to which information in the universe cannot be created nor ever destroyed, Navarro’s work resists the prevailing sense of melancholia towards all the possibilities foreclosed by the pandemic. Instead of looking back at what the exhibition could have been, Navarro’s unpretentious drawings metabolise the original breathing installation, enacting its transformative spirit in a more intimate language.

Also presented by Gasworks, True Currency: About Feminist Economics is a six-part podcast hosted by artists Amy Feneck and Ruth Beale (The Alternative School of Economics). The outcome of an eight-month residency, the podcast is produced in collaboration with Lucia Scazzocchio from Social Broadcasts, and presents detailed testimonials from researchers, policy experts, community leaders and activists, while exploring issues of financial inequality, feminism, intersectionality, labour exploitation, unpaid work, care, unionisation and reproductive labour.

Gasworks is a non-profit contemporary art organization that was founded in 1994. Among other activities they have developed a highly respected international residency program, which offers foreign artists the opportunity to experiment, research and develop new work in the city of London, all within a community of international art professionals. Gasworks commissions are supported by Catherine Petitgas and Gasworks Exhibitions Supporters.