Curators and artists of any nationality can register individually or in groups until April 30th, 2020. 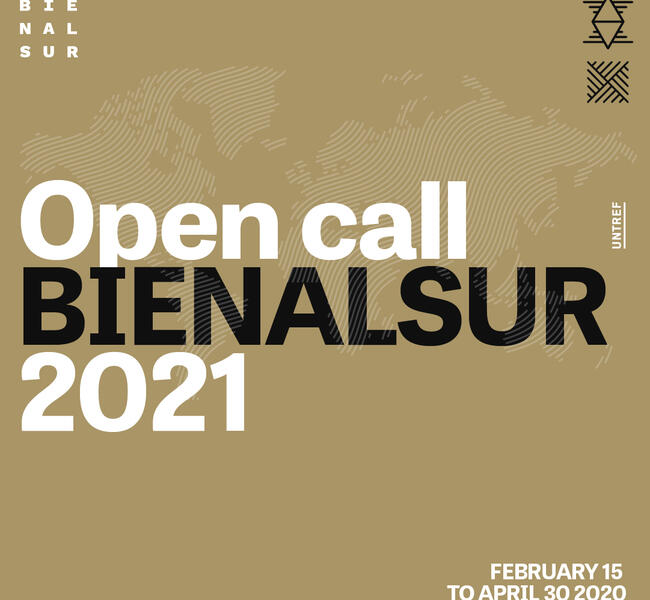 The General and Artistic Direction of BIENALSUR invites artists and curators to submit artistic and curatorial research projects to be included in the program of its third edition, which will take place in different venues in an extended and multipolar territory simultaneously integrating the South American countries and others from Africa, Asia, Europe, and Central and North America.

The proposals have to fall within the scope of contemporary art and culture theories with a view to analysing, questioning and providing new perspectives of and insights into a diversity of experiences of contemporary life.

BIENALSUR is a project organized by the UNTREF (Universidad Nacional de Tres de Febrero de Buenos Aires), an Argentine public university. Among other objectives, the project seeks to contribute to the creation of a cultural citizenship from South America.

Through its format and working modality, BIENALSUR expects the art of each region to be integrated not just as a mere diversity quota, but on an equal footing on the basis of their singularities and relative positions. Therefore, one of the objectives of this project is the creation of a space for the development of critical thinking independent of the major canonical narratives. Additionally, this biennial seeks to promote the emergence of alternative practices within the world of art and culture in terms of the generation of ideas and works as well as their exhibition, circulation and consumption modalities.

Since when and which is the limit date when the projects can be presented for the next edition of BIENALSUR?

How to participate in the call?

The only way to register for the call is through the BIENALSUR website (in the call section, registration form).

What details should be included in the summary of the project within the registration form?

The materiality of the work (photography, video, painting, etc.) should be detailed with as much information as possible (measurements, support, mounting details). We suggest including images of the work or curatorial project describing the concept of the proposal. In the case of videos not yet made, we recommend that you send a storyboard and videos made previously.

Are there any conditions for artists to present themselves?

No, there is no age or nationality limit, nor is a CV required. BIENALSUR is the opportunity to share and spread the different currents of contemporary art.

Must the project be unprecedented?

Even though the call aims to gather original and unpublished projects to be eventually integrated within the plan of action of BIENALSUR, projects that have already been carried out in other places may be presented, with adaptations to the territory, community or place where they are located. Likewise, in case there is a previous version, the presentation should clearly indicate where and when it was made.

What disciplines are included?

All those corresponding to the visual arts, including the intersections that occur between different disciplines.

Where can the project be based?

Given the nature of the process carried out by BIENALSUR and the network logic of the  on which it advances, any venue or space can become a place for the project to be based on, whether it is a formal exhibition space, such as a cultural centre, or an alternative one such as a public or virtual space (digital platforms). As soon as the project is pre-selected, the organization of BIENALSUR will start the necessary steps to evaluate its viability.

If I propose a project for a space, whether public or private, what kind of permits must I have?

To apply to the call for proposals, it is not necessary to have permits. In case of pre-selection of the project it will be necessary to process them. BIENALSUR will be a facilitating agent for these procedures.

Is the subject free?

The call is totally free, without a pre-established theme in order to identify the active agendas in each site. The main selection criterion is the quality and originality of the proposal. From the analysis of the projects received, the Curatorial Council identifies the curatorial axes that integrate each edition of BIENALSUR. Likewise, based on the thematic convergence, the projects will be integrated into curatorships to be located in the different spaces of the BIENALSUR map.

Is it necessary to present a budget?

It is not necessary to present a budget in the call, but it will be required in case of being pre-selected.

What kind of projects are accepted?

All types of visual arts projects. Works in the most diverse formats can be included, from interventions in a specific space to exhibitions in more conventional media, such as painting, photography, sculpture, drawing, video, performance installations, film, music, video, etc.

If I was already selected in the previous edition of BIENALSUR, can I present another project for the next edition?

Can I submit more than one project?

No. Only one project per applicant is accepted. In case you submit a group project, you can also apply with an individual proposal.

When will the results of the pre-selected projects be known?

The announcement of the pre-selected projects will be from July 2020.

What does it imply to have been pre-selected?

Having been pre-selected does not automatically imply participation in BIENALSUR but reflects an interest of the Curatorial Council and the possibility of accessing the second selection stage from which the projects that will integrate BIENALSUR 2021 will emerge.

In case of being pre-selected, which are the next steps to follow?

Once the list of pre-selected projects has been published, the BIENALSUR team will make progress on the possible dialogues with the curatorial axes identified in the present open international call and the feasable integration of each project into the BIENALSUR map. The authors of those projects that go beyond this instance and are integrated in exhibitions, actions or other BIENALSUR activations will be contacted by the BIENALSUR team to start the necessary dialogue to go forward towards the establishment of a budget and other needs related to the concretion of the project.