The Bronx Museum of the Arts presents Gordon Matta-Clark: Anarchitect 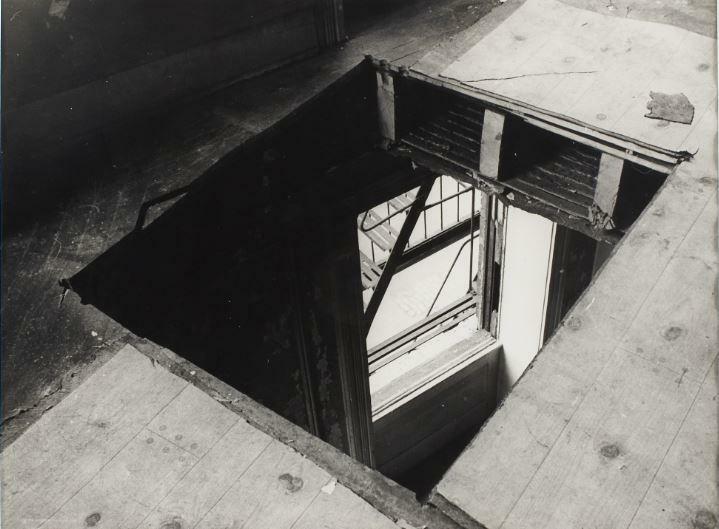 This fall, the Bronx Museum of the Arts will present Gordon Matta-Clark: Anarchitect, an exhibition focusing on the significant role the Bronx played in the development of Gordon Matta-Clark’s practice. Best known for his monumental cuts, holes, apertures, and excisions to the facades of derelict homes and historic buildings in 1970s New York City, Matta-Clark’s work provides a potent critique of architecture's role within the capitalist system. Gordon Matta-Clark: Anarchitect includes over 100 artworks by the artist, rarely seen materials from his archive, and immersive film projections. On view beginning November 8, 2017, Gordon Matta-Clark: Anarchitect is organized by Sergio Bessa, Bronx Museum Director of Curatorial and Education Programs; and Jessamyn Fiore, independent curator and co-director of the Matta-Clark Estate; and will travel to the Jeu de Paume in Paris, France, the Kumu Art Museum in Tallinn, Estonia, and the Rose Art Museum, in Waltham, Massachusetts, following its presentation in the Bronx.

“The elements of Gordon Matta-Clark’s practice that were centered in and around the Bronx through the 1970s comprise a fascinating, illuminating body of work that provides insight not only into the development of one of the most influential artistic figures of our time, but also into the history and character of our borough,” said exhibition co-curator Sergio Bessa. “We are thrilled to be able to present a tremendous body of rarely exhibited material in coordination with the Matta-Clark Estate and Jessamyn Fiore, and to do so in the community that is at the heart of these works. At a critical point in New York City’s history, Matta-Clark aimed not to provide solutions to the problems of urban life, but to urgently raise consciousness and reconsider the system and networks that defined and limited how people lived in this city.”

Taking as a point of departure Gordon Matta-Clark’s pivotal series of “cuts” produced in the Bronx that led to his further exploration of the city as a field of action, Gordon Matta-Clark: Anarchitect will examine the artist’s pioneering social, relational, and activist approach. The exhibition highlights the political dialogue inherent in the artist’s artistic interventions—from his concern for the extreme plight of the homeless (Garbage Wall, 1971), his interest in direct community engagement (FOOD), his belief that we should expand our lived experience of a city into its underground and other inaccessible spaces (Substrait, 1976, and Day’s End, 1975), and his commentary on development and socioeconomic stratification (Bronx Floors and Conical Intersect, 1975).

“For the first time in New York this Matta-Clark exhibition focuses on his direct engagement with this city. Its everyday lived existence was not a backdrop, it was the material itself with which he worked— transforming the static and mundane into a dynamic, even dizzying experience,” said co-curator Jessamyn Fiore. “And this feat of urban alchemy was not achieved by destroying what was to make something new; instead he evolved the material through cutting, cooking, recycling, and drawing, causing it to be seen with fresh urgency. And it was urgent because the city was in crisis. His response— with every work and action—was to demonstrate our own potentiality—our own inherent ability to physically change our space, our city, our politics. He wanted to inspire the people to take their architecture into their own hands, to unmake and remake, to fully live in the place surrounding them without temerity or fear of authority. He believed that art could change the world for the better and he strove to make work that could empower people. Even though he passed away in 1978, every question he raised is still relevant to us living in New York City today. This exhibition will seek to extend the conversation Gordon began: how do we live in our city and how do we evolve it?”

Gordon Matta-Clark: Anarchitect offers a new assessment of a pioneering body of work by the artist, including rarely seen pieces such as:

The exhibition will further contextualize Matta-Clark’s pivotal contribution to the era through additional works by Alvin Baltrop, who documented the exuberant gay community that populated the site where Day’s End was created. Additional archival materials by Henry Chalfant, featuring graffiti-covered New York City trains, and the entire series of graffiti zines IGT (International Graffiti Times), edited by David Schmidlapp, will also be included in the exhibition.

A 200-page, full-color catalogue will accompany Gordon Matta-Clark: Anarchitect. The exhibition catalogue vibrantly reproduces and interweaves Matta-Clark’s artworks and archival materials to relay the multi-textured and multi-dimensional character of his projects and to explore the artist’s writings and drawings as an active part of his practice.

Support Gordon Matta-Clark: Anarchitect is made possible by the Henry Luce Foundation, National Endowment for the Arts, Graham Foundation for Advanced Studies in the Fine Arts, Blue Rider Group at Morgan Stanley, David Zwirner and the Estate of Gordon Matta-Clark.

Born in New York City in 1943 to artists Robert Matta and Anna Clark, Gordon Matta-Clark came of age during a time of political turmoil against a backdrop of aging urban infrastructure. He studied architecture and graduated from Cornell University in 1968, returning to his native New York City the following year. Struck by the inability of Modernist forms to provide solutions to the city's increasing social problems, he began to combine his activist concerns with his artistic production. In the 1970s, Matta-Clark experimented across various media and began staging monumental interventions and smaller-scale installations in the charged city landscape, bringing attention to New York's failing social policies, displaced people, and abandoned spaces. He helped establish alternative spaces such as 112 Greene Street in SoHo and empowered communities of artists and non-artists to collaborate on improving their surroundings. Matta-Clark died from cancer on August 27, 1978 at the age of 35.

About Sergio Bessa
Sergio Bessa is the Director of Curatorial and Educational Programs at the Bronx Museum. A concrete poetry scholar, Bessa has written numerous essays on the subject and is the author of Öyvind Fahlström—The Art of Writing. He is the editor of several volumes, including Novas—Selected Writings of Haroldo de Campos, Towards a Theory of Concrete Poetry—The Collected Writings of Mary Ellen Solt, and Beyond the Supersquare—Art and Architecture in Latin America. As a curator, Bessa has organized multiple exhibitions, including the 3rd Trienal Poli/Gráfica de San Juan (in collaboration with Deborah Cullen, 2012); Intersections—The Grand Concourse at 100 (2009); Joan Semmel—A Lucid Eye (2013); Paulo Bruscky—Art is our Last Hope (2013); Three Photographers from the Bronx: Jules Aarons, Morton Broffman, and Joe Conzo (2015); Martin Wong: Human Instamatic (in collaboration with Yasmin Ramírez), (2015) at the Bronx Museum.

About Jessamyn Fiore
Jessamyn Fiore is an independent curator, writer, and co-director of the Estate of Gordon Matta-Clark. Among others, she curated the critically acclaimed group exhibition 112 Greene Street: The Early Years (1970–1974), for which she edited the critically acclaimed, eponymous catalogue; and Gordon Matta-Clark: Above and Below (2013), both at David Zwirner Gallery. From 2007 to 2010, she was director of Thisisnotashop, a nonprofit gallery in Dublin, Ireland, where she curated the exhibitions Gordon Matta-Clark: FOOD (2007) and Fluxus with Larry Miller (May 2009), among others, with exhibitions touring to the Tate Modern in London and X-Initiative in New York. In 2015, she joined the Jean-Paul Najar Foundation in Dubai, UAE, curating its inaugural exhibition Jean-Paul Najar: Vision & Legacy (2016) and Artist Run New York: The Seventies (2017). She is the co-director and co-founder of Nasty Women Exhibition, a global art movement to support women’s rights. She works with Rawson Projects gallery in New York as a curatorial advisor and organizes its biennial Process Series. Fiore is also a playwright whose plays have been performed internationally; her original one-act play Blast from The Past (2014), based on the writings of Robert Smithson and Gordon Matta-Clark, was published by the Bureau for Open Culture. She received her master’s degree in contemporary art theory, practice, and philosophy from the National College of Art and Design, Dublin.

About The Bronx Museum of the Arts
The Bronx Museum of the Arts is an internationally recognized cultural destination that presents innovative contemporary art exhibitions and education programs and is committed to promoting cross-cultural dialogues for diverse audiences. Since its founding in 1971, the Museum has played a vital role in the Bronx by helping to make art accessible to the entire community and connecting with local schools, artists, teens, and families through its robust education initiatives. In celebration of its 40th anniversary, the Museum implemented a universal free admission policy, supporting its mission to make arts experiences available to all audiences. The Museum’s collection comprises over 1,000 modern and contemporary artworks in all media and highlights works by artists of African, Asian, and Latin American ancestry, as well as artists for whom the Bronx has been critical to their development. Located on the Grand Concourse, the Museum’s home is a distinctive contemporary landmark designed by the internationally recognized firm Arquitectonica.