THE GUGGENHEIM BILBAO MUSEUM INCORPORATES AN INSTALLATION BY LUCIO FONTANA

In the imposing Atrium of the Guggenheim Museum Bilbao, as a result of a collaboration between the museum and the Fondazione Lucio Fontana in Milan, the Neon Structure for the 9th Milan Triennale installation is exhibited.  The artwork by the emblematic artist Lucio Fontana (Rosario, Argentina, 1899 - Varese, Italy, 1968) was conceived by the artist in 1951 as a piece whose composition defies the limits of disciplines as diverse as drawing, sculpture, design and lighting. In 2019, as part of the Lucio Fontana exhibition, the museum had exhibited this structure of disproportionate dimensions. This time, the work will remain at the Guggenheim Bilbao for three years. 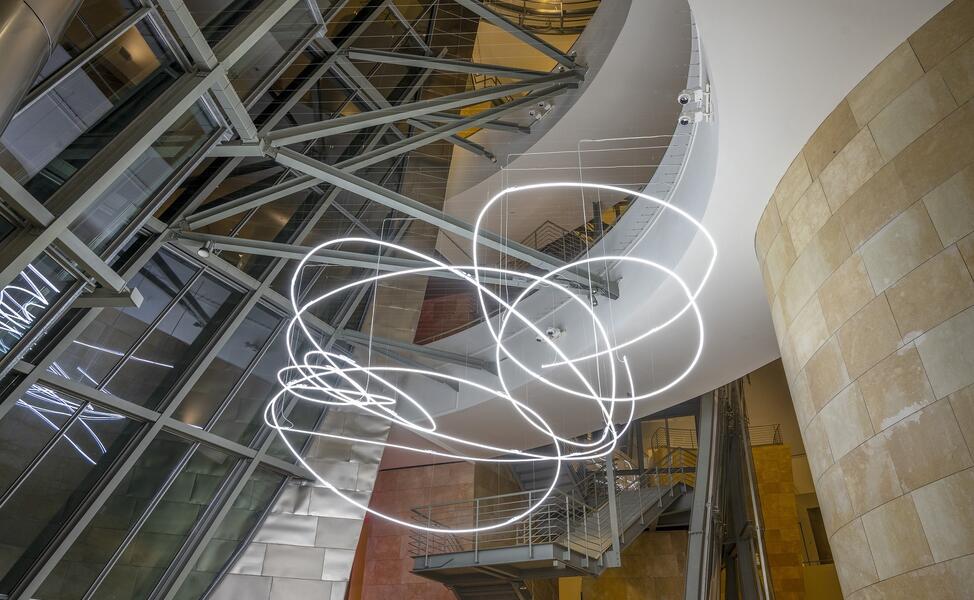 Although the Italian-Argentine artist's career is best known for his large-scale cut-up canvases —primarily his Concetto Spaziale (Spatial Concept) series, produced during the 1950s and 1960s— the oeuvre installed for the permanent exhibition at the Guggenheim Bilbao is part of an earlier and crucial period of experimentation in the artist's career.

With the will to displace wall and painting art and launch it into the possibilities offered by space in 1947 Fontana founded the so-called Movimento Spaziale, also known as Spatialism. His work, until then, had been dominated by sculpture. On his return to Italy, the artist moved into the fields of abstraction and the exploration of materials, transferring the characteristics of sculpture to the production of structures that turned the void into a new exhibition space. These pieces, as he explained, were intended to question the space from the chromatic and gestural experience in constant dialogue with the concepts of temporality, volume and depth. "The neon created for the 9th Triennale di Milano in 1951", explains Paolo Laurini, president of the Fondazione Lucio Fontana, "can certainly be considered one of the artist's most representative and iconic works; an absolute example of his groundbreaking creativity".

On the other hand, Fontana always had a direct relationship with architects, whom, according to Laurini, "he considered close to him because of their spatial sensitivity". This detail is not minor given the importance that the building of the Guggenheim Museum Bilbao, designed by the Canadian architect Frank Gehry at the end of the 1990s, has for modern architecture. In this sense, the inclusion of Fontana's work in the museum's Atrium interpellate the space conceived by Gehry by intensifying and challenging its architectural qualities.

Ultimately, Neon Structure for the 9th Milan Triennale is also a fundamental expression in the context of a contemporary art museum. Realised in the mid-twentieth century, the use of technological material —in this case neon light— as a medium for artistic composition is a key gesture of rupture for the time. And there is no doubt about the influence that this particular oeuvre, and Fontana's artwork in general, had on later artists as diverse as Klein, Oteiza and Soto.