The Museum of Modern Art of Buenos Aires, under the Ministry of Culture of the Government of the City of Buenos Aires, announces the inauguration of Sergio Avello: young multipurpose professional, to be held next Wednesday, September 20 at 7:00 pm in Av San Juan 350 with a party musicised by DJs Dr. Trincado, Oliverio and Ruben Zerrizuela, until 23:00. 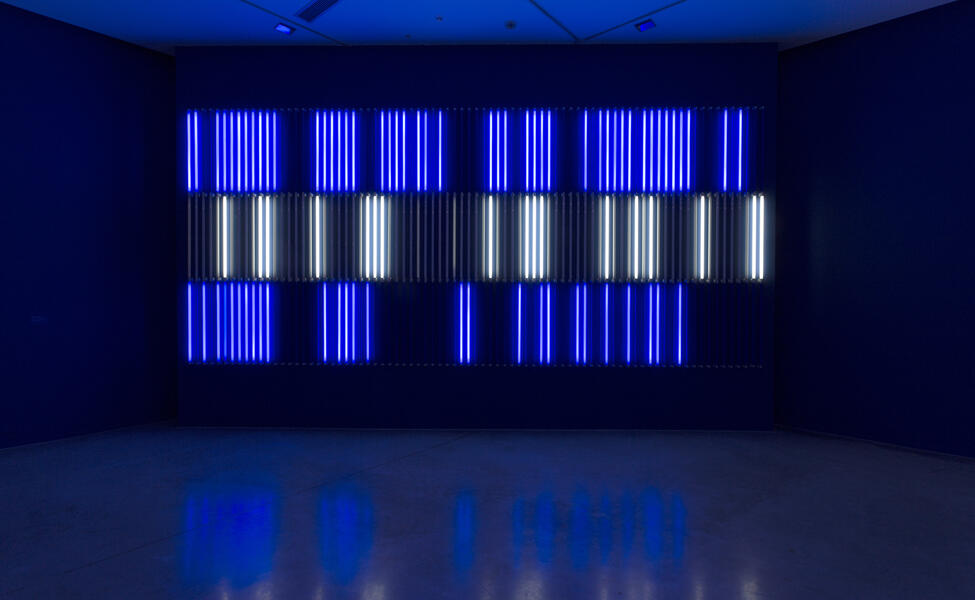 This is the first panoramic exhibition of Sergio Avello in a museum, and runs his extensive artistic production, developed between 1984 and 2010, at the time of his early death. With a relevant selection of paintings, light works, objects, music, period documents and audiovisual records, the exhibition curated by Sofía Dourron - co-ordinator of Curaduría del Moderno - includes the Avello tour as an artist, and also accounts for a larger universe of which he was a part: the music, the night and the friends that dynamized his artistic practice displayed in parties, shows and recitals.

As the curator explains in the catalog that accompanies the exhibition, Avello is part of a practice that assumes as its own the materials and motifs associated up to that time with the decorative.

Sergio Avello was born in Mar del Plata in 1964, and in 1983 he arrived in Buenos Aires. Always nomadic, Avello had the shelter of friends and an infinity of workshops. His belongings entered a small briefcase that he carried with him. "The incessant movement was a strategy of survival that became a way of being in the world and form of work: his work made transportable formats a cult," says the curator.

In the eighties, Avello's practice distinguished himself from the other artists of the under, his minimal and deprived gestures sought to evoke an idea of ​​beauty based on a carefree perception of reality. "Each work is a stimulus to the senses, part of a light atmosphere that should not be confused with innocence and frivolity. Indeed, his paintings are an act of perception, like looking at the sky, "says Dourron.

Young, neat and minimalist, Avello was integrated, despite the aesthetic differences, to a period spirit that was based on the encounter with the close community and the continuous action. Avello organized shows with his artist friends in institutional spaces such as the Juan Carlos Castagnino Municipal Museum of Art in Mar del Plata, but also in alternative spaces of the time: Cement, Garage H and Rainbow. Among them are two samples that lasted only one day at the 3 de Febrero del Ferrocarril station in 1988 and 1991.

In March of 1989 Avello inaugurated its first individual exhibition in the gallery of Adriana Rosenberg: Arte Decorativo Argentino. New exponent, a sample of small pictures, tempera on paper and cardboard mostly, some inks, many cherry flowers, circles and semi-circles, variations on the same motif in pink, some blue and blue, always delimited by thick black lines The motifs, colors, small formats and even the assembly of the exhibition, clean and airy, explain a fundamental difference with its surroundings. In the middle of a group of expressionist painters, Avello threw himself completely into the lightness of what he called decorative, broke with the intellectual prerogatives of the painting that surrounded him, and put on a new sensibility.

Pictorial searches led him to explore other media in the mid-1990s. Avello always looked for the new, the latest, in music, in parties and in life. At the beginning of the nineties he created his light boxes: structures composed of a wooden box, a light apparatus and a cover of color designed digitally and printed on acrylic. His life also included his work as a montajista, the settings in discotheques, the parties, the night.

"Avello is a friend of art, a loving admirer of artists, a sponge of information and images that absorbs the image and returns it multiplied and remixed. It appropriates with humor, as if the works were an internal joke between him and Malevich or Polesello, "so the curator describes some of Avello's works. His series of tributes to Sol Lewitt are based on an act of admiration and material solvency. Sol Lewitt exhibited in December 2001 at Fundación PROA, where Avello was the assembly manager. With all the traces of paint from this exhibition, Avello created a series of polychrome boards with bands of primary colors. Shortly before, and by way of homage, created Polecelis, crossed anomalous between Polesello and Pérez Celis.

In the early 2000s, Avello's playful abstraction shifted toward patriotic symbols. The crisis that crossed the country in 2001 resonated in many artists as a call to action. Avello, as always, opted for the tangential route: he moved his color planes to the flags of Argentina and the United States. The Argentine flag is repeated again and again, in leather, in lamb, in enamel, in tubes of light. His flags show the singular tone of the artist, whose political commitment was always elusive, but never indifferent.

The exhibition will be accompanied by a catalog with texts by Sofía Dourron, María Moreno and Pablo Schanton, and a selection of works, documents and photographic records of samples, parties and settings that account for the many facets of Avello.