Theoretical Beach, is the title of this solo exhibition by Cuban artist Diango Hernandez, curated by Stefanie Kreuzer. 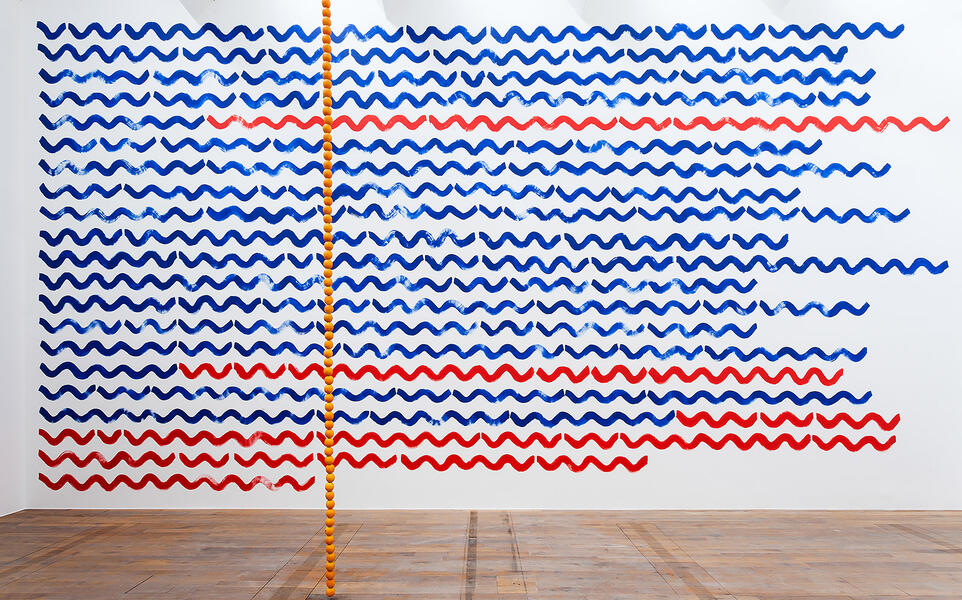 Museum Morsbroich presents Theoretical Beach. The title stands for the transition from sea to land. With simple materials and agile gestures, Diango Hernandez transforms the whole castle into an open processual space that enables visitors to make the transition between sea and beach and sense the tension between the different elements.

The exhibition addresses precisely that point where, in the metaphor of the sea, the "movement of being" meets "solid ground," in other words, the place "where man establishes his institutions" (Hans Blumenberg). The place where the categories and value of being which shape and determine the cultural, social and political system become manifest. The beach also indicates Cuba, the tropical country from which the artists comes, while at the same time becoming an imagined place of yearning, where biography, utopia and memory become superimposed and re-mixed; biographical allusions to an upbringing in socialist Cuba encounter the artistic engagement with modernism. The specific idea of a tropical identity nurtured by a blend of different relationships forms the "bio"-sphere of the Theoretical Beach within which the artist defines the fundamentals of his artistic work.

The extensive wall paintings constituting Wave Texts flow around the central section of the castle, and transform it into a kind of aquarium in which everything seem to be in motion. By contrast, the corner rooms of the side wings serve as anchor points. The visitors are—literally and metaphorically—stranded here on Sand Banks. Thus grounded, on the borderline between land and sea, they look at the moving wave-text paintings. The artist locates himself in the corner rooms—sometimes also in his memory, as when he integrates the ground plan of his apartment in Cuba into the exhibition context as a sculptural form.

Diango Hernandez does not present solutions in his works. He also does not decide on the position of the viewer. Instead he sensitises them by inviting them to consider and question the cultural and social postulates in the sphere of the Theoretical Beach.