Liliana Porter participates in the 57th edition of the Venice Biennale

Liliana Porter conceived the work Man with an axe, 2017, which will be presented for the first time at the Arsenale in Venice. The piece is the culmination of a series of works created in the last several years, in which Porter positions a tiny, solitary character in front of a pile of material completely out-of-proportion to their size or ability. 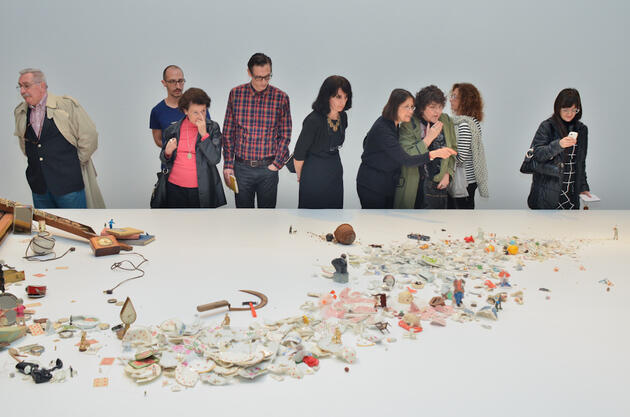 The Venice Biennale inaugurates its 57th edition on the next 13th of May. Entitled Viva Arte Viva and curated by Christine Macel, it intends to be a comprehensive panorama of international art production. Given the historical weight of being the oldest art biennale, it naturally is one of the most expected and celebrated events in the art world. This time, humanism will be a key concept; a guideline conceived and brought forward by the curator.
Among the artists chosen for the prestigious event is Argentinean Liliana Porter (Buenos Aires, 1941). She will exhibit A man with an axe, 2017, the result of a long chain of works produced in the last years, in which the artist puts a small lonely figure in front of a huge pile of material in regards to its fragile scale. Facing such huge mountains, the figures in these series seem to work incessantly. Besides the main little figure, there are other small characters inhabiting the piece: archetypes such as soldiers, travellers, peasants, geishas, kings, among other unexpected ones.
Lilian Porter’s artwork can be seen in the Arsenale area until the final day of the biennale on November 26 in the city of Venice.