Claudio Correa’s installation Liberty, Equality, Fatality places within the revolutionary utopia the precarious reality of immigration in the twenty-first century. The work is a scale model of a ship, similar to the ones that brought the first immigrants to Chile in the nineteenth century, with the sound of three Latin American adaptations of La Marseillaise. 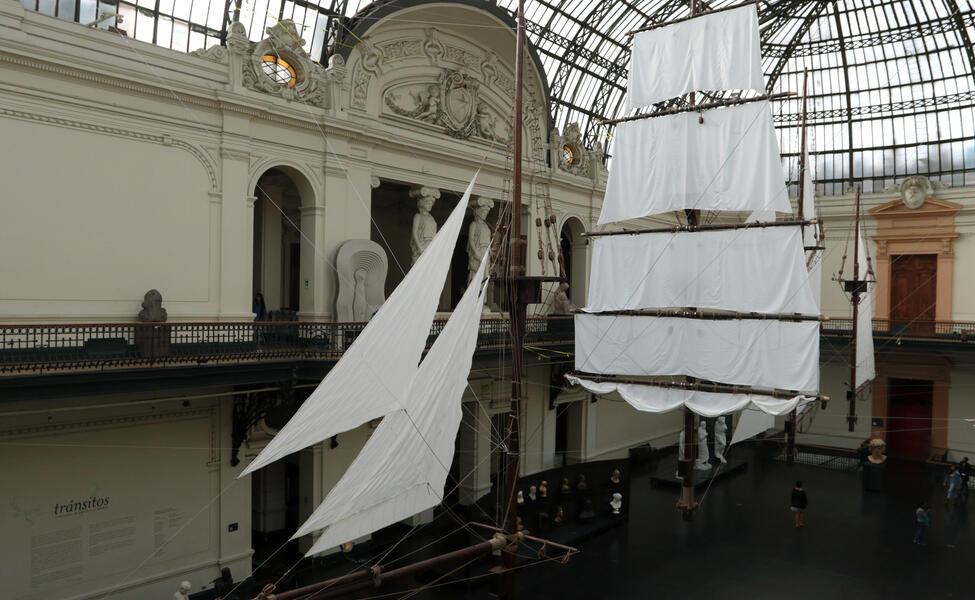 A ship floating in mid-air, from which polyphonic sounds emerge, in tune with the movement of its sails, is installed in the central hall of the National Fine Arts Museum in Chile, from October 6 to November 27. With this work, the Chilean artist Claudio Correa (1972) articulates a new strategy in his critical readings of history and current events.

The Liberty, Equality, Fatality exhibition, curatorship by art historian Sebastian Vidal, resignifies the notion of the French Revolution through adapted versions of the classic anthem La Marseillaise, in order to transport us to the present time, facing the migrant crisis.

The installation is a scale model reproduction of a ship, similar to the ones that brought the first immigrants to Chile in the nineteenth century; most of them Europeans who settled mainly in the south of the country, protected by state plans related to enterprise, modernization and cultural and racial transformation.

The ship stands on four masts connected by ropes and cords to the structure of the museum’s vault. Each set of sails in this huge installation is equipped with speakers emitting interspersed sounds and fans creating movement on the sails, turning the museum’s central hall into a soundboard, creating an effect similar to that of a ship being moved by the wind.

Claudio Correa reproduces three versions of La Marseillaise that were used in Latin America during the twentieth century by the Argentine anarchist movement, the Peruvian APRA and the Chilean Socialist Party, each one adapting the lyrics of the French hymn to fit their own ideology. These versions are interpreted by Latin American immigrants in Chile: Peruvians, Colombians, Bolivians and Venezuelans, among others, and are presented simultaneously. This choir is composed of informal workers in the vicinity of the museum in Santiago’s downtown.