Victoria Miro is delighted to announce an exhibition of new paintings by US Detroit-based artist Hernan Bas inspired by the lore and romanticism of life at Cambridge. 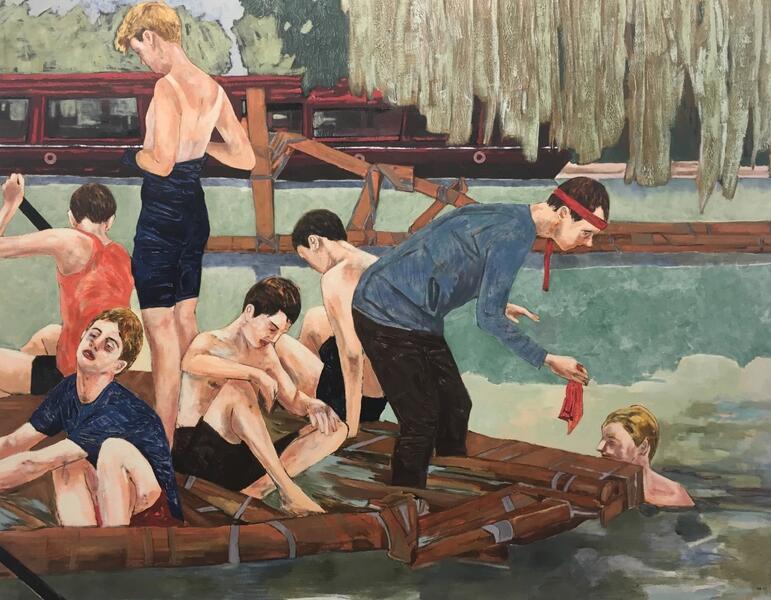 Following a period of research while in residence at Jesus College Cambridge in 2016, Bas has developed new subject matter including the famed "Night Climbers of Cambridge," a group of students whose nocturnal ascents of the ancient buildings of the university and town, taking photographs while trying to avoid detection, gained them a cult following during the early decades of the 20th century. The notoriety of this thrill-seeking fraternity was cemented when an eponymous book, written under the pseudonym Whipplesnaith, was published by Chatto and Windus in 1937, featuring photographs of members perched atop steeples and squeezed between pillars without climbing ropes and often dressed in dapper evening attire.

An aura of camaraderie, transgression, eroticism and decadence permeates other works on display, which feature Cambridge societies such as the secretive Adonians, famed for their fabled dinners in which fellows and old boys invite the most attractive male undergraduates. Debauchery of a more inclusive and contemporary kind is witnessed in the artist's depiction of Caesarian Sunday, the first of Cambridge's summer drinking parties traditionally held on the Sunday of the May Bank Holiday weekend, and the notorious after-exams party Suicide Sunday, held in June, and its traditional cardboard boat race. In his depiction of this, Bas makes a gentle nod to Théodore Gericault's The Raft of the Medusa, 1818–19, though allusions to classical themes and genres are always viewed through the prism of his interpretations as an observer and an outsider—whether trying to follow in the footsteps of Lord Byron, portraying punters, or depicting freshers, a term unknown to the artist before his Cambridge sojourn.

Bas is as prodigious in his experimentation with painting materials and techniques as with his reference points and source material. Inspired by an exhibition of illuminated manuscripts at the Fitzwilliam Museum, which included a vitrine containing the pigments used to create them, he has recently begun to make his own paints, the results of which can be seen in these paintings on linen and painted works on paper.

Bas' practice has always been intrinsically linked to an exploration of history and literature and stems from the artist's interest in figuring historical and mythological narratives within the imagery and iconography of popular culture, fashion, queer culture and mysticism. With an increased focus on English subject matter, recent bodies of work have concentrated on the "bright young things" of 1920s London and the Bloomsbury Group, whose male members, with the exception of Duncan Grant, were educated at Cambridge. An elaborate, career-long narrative weaving together cults, sects and secret societies, nihilistic romanticism, youthful abandon—and its flipside, introversion—is further enriched as Bas turns his attention to hothouse varsity life.