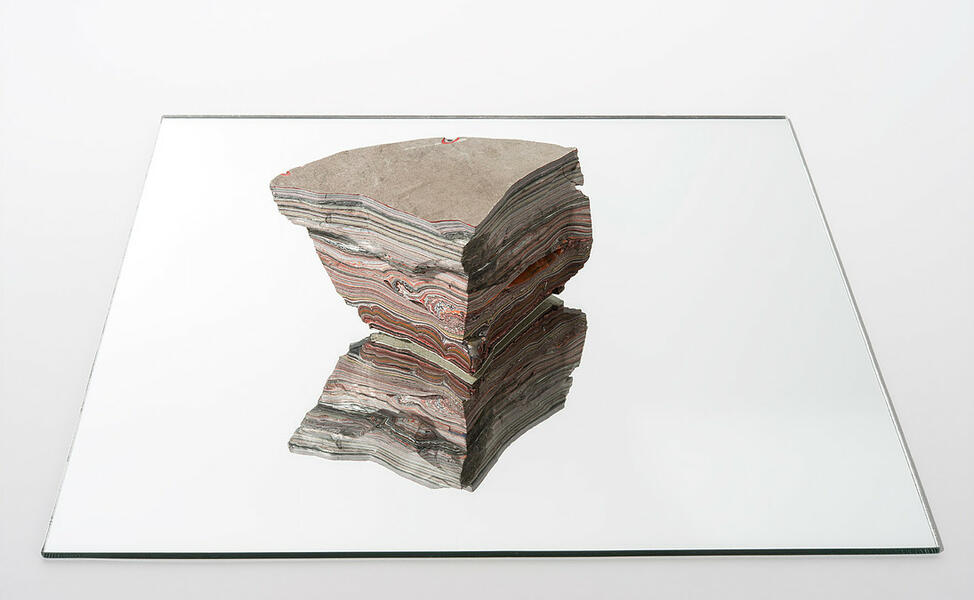 The title uses the metaphor of the double-bind, or the communicative situation in which a person receives a different or contradictory messages, to talk about the post-media condition of art. This is a kind of improvement of the specificity of the medium in which a production of meaning circumscribed to a particular medium is no longer necessarily but rather, there is a digression in contemporary forms of artistic production. Montero raises in his text that "however, the mere fact of thinking about a post-medium is coming back to us as in a kind of double bind for the characteristics of the media that allow us to identify art as such. A double bind in the sense that there are two demands in conflict, each one of them in its own and different logical level, considering that none of them can be ignored. Therefore, and although there is no longer a specific condition of the media, the issue is far from closing."

In relation to this problem, he explains that from his perspective, "rather than a postmedial condition, we could speak, to some extent, of works that have been placed within the limits of the artistic media, or certain practices that insistently continue being a burden. This is not to restore them, but rather to think about how it is that once they were possible in the past. Artists who insist, however, that exploring the media despite their crisis, still makes some sense. Painting, sculpture, drawing and photography can fall into an organic and codependent relationship if they are taken to the limit of their own specific conditions, which, far from being real, they are based on modern myths. In such way, a sculpture can be made from a painting if color is no longer acknowledged, but rather it is considered as the accumulated pictorial matter, or even the superficiality of the pictorial level can be questioned as a surface if it is violently altered in the action of adding and removing paint successively. In this sense, the artistic condition of the medium becomes tense, no longer towards the inner meaning but rather toward the superficial exteriority in the object-image relation."

The exhibition shows the tensions of the media in contemporary art through three artists - Mateo Cohen, Marie Rief and Bernardo Montoya - who, in their own way, question the duality expressed in the depth-surface relation and if it is possible to preserve it after all.

Firstly, Marie Rief's works are "superficial windows" in the sense that the drawing that is added makes one notice that the representation of depth is just that: a representation. In this case, the works of Rief may question the photographic effect because the drawing that is added brings the superficial light, of which a photograph is constituted, back to the paper. However, there is still a trace of that depth as a footprint.

In the case of Mateo Cohen, the fact that the surface appears as the "work" of the medium in each painting, is what is considered substantial. The action of the painting of this artist is more related with the "limit" of the painting rather than with the representation or even with the surface. By transferring the pictorial matter as a kind of template from one canvas to another, the superficial footprints of the previous medium that remain there as residue become evident. Cohen is neither interested in the surface as a content nor in what is beyond the painting as space. However, his practice lies on the edge between those three things. The color in his paintings works as the evidence of the pictorial space as a limit.

On the other hand, Bernardo Montoya executes the opposite process. How is it possible that painting is so superficial that it becomes volume? In this case the color is substantial not only because of the superficial coating, but because of the same relationship (the old Aristotelian dispute) between form and matter. The works of Montoya are not paintings, but it is the color that acquires a volumetric condition as matter.

Due to these facts, the exhibition Double Bind is a point and a questioning about the modern condition of art and its foundations. It is an exhibition about art and its material contradictions.